Decreased odds for a coastal storm in parts of U.S. East and Mid-Atlantic early next week. Rip currents still likely, as system forms off the coast.

Is a storm brewing on the horizon? Yes, but, as of now, it appears as if it will not impact the U.S. Mid-Atlantic and New England states. Over the past several days, the most reliable weather models – the Global Forecast System (GFS) and the European Centre for Medium-Range Weather Forecasts (ECMWF) – both have hinted at a potential storm developing this weekend and possibly affecting parts of the U.S. Mid-Atlantic and Northeast states during the first week of October 2013. At this writing, however ((September 26 at 6:31 EDT, or 1031 UTC), it looks as if the storm will not impact U.S. land areas. We will take a look at what the models are indicating and ask whether we should be concerned about this potential storm.

We are definitely not talking here about a Sandy or anything truly disruptive for the U.S. Mid-Atlantic or New England states.

Let’s see what the models are saying today. Remember, these are computer models that cannot tell the future with absolute certainty; they can only project possible future scenarios.

The European Centre for Medium-Range Weather Forecasts (ECMWF) model has shown a wave of energy pushing off the coast of Florida and emerging into the Atlantic Ocean. After it pushes into the western Atlantic Ocean, the ECMWF model indicates an area of low pressure slowly intensifying off the U.S. coast and becoming either a tropical or subtropical storm on Monday, September 30, 2013. This past Tuesday (September 24), the model was showing this area of low pressure possibly swinging back to the northwest and impacting the U.S. Mid-Atlantic and New England states. If that solution verified, it would be very similar to a Nor’easter with rain, gusty winds, and rip currents along the U.S. East coast. Fortunately, a solution of a Mid-Atlantic or New England hit appears unlikely as the storm should form too far east to directly affect the United States. 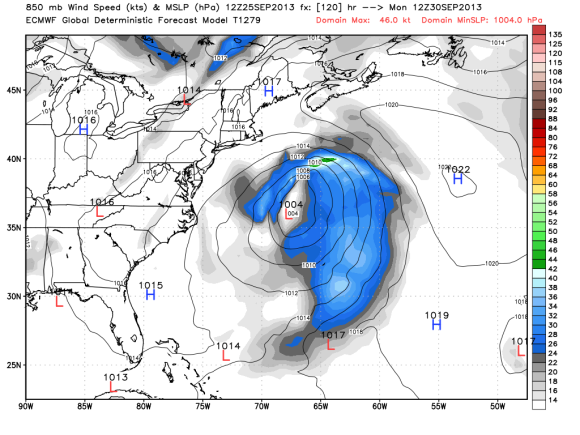 In the picture above, you can see ECMWF model forming the low and keeping it off the coast of the Eastern United States. In this solution, the biggest threat from this system would be rip currents rough ocean waters all along the U.S. Mid-Atlantic to Northeast coastline. The ECMWF model simply pushes the storm to the northeast and away from land areas. 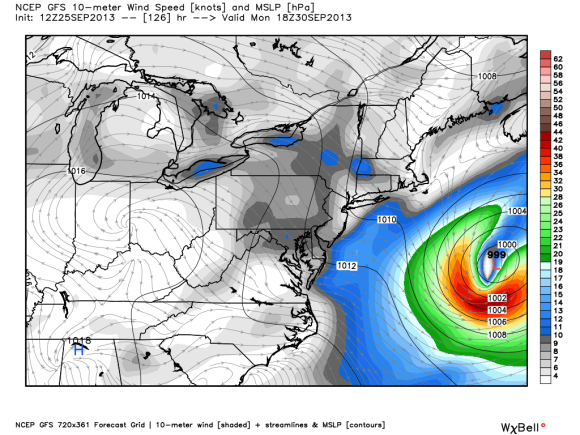 The GFS also shows a storm forming by early next week. However, it is also away from the U.S. coastline. Image Credit: Weatherbell

Now let’s look at the Global Forecast System (GFS) models. In the image above, you can see the GFS model forming the low. In these model runs, the GFS has trended further east and away from land areas. It also has shown a typically weak system too. If anything, it is good to see a trend of a storm forming further east from our most reliable weather models.

Bottom line: The odds are decreasing of a coastal storm impacting parts of the Mid-Atlantic early next week. The majority of our weather models are showing a solution that shifts the storm too far east to create direct impacts on the United States. However, rip currents appear likely as the system forms off the coast. There is still plenty of uncertainty regarding the intensity or direct track of this storm, especially since it has not formed yet. It will be something interesting to watch as it develops. Fortunately, even if it does impact the Northeast, it will be similar to a Nor’easter, which is something the Northeast U.S. can handle should the storm push further west.