Lee could cause flooding along U.S. Southeast’s Gulf Coast on Labor Day Weekend 2011. It could become a Category 1 hurricane before it moves inland.

On September 1, 2011, the 13th tropical depression of the 2011 Atlantic hurricane season formed in the Gulf of Mexico. Within the past few hours, this system has been upgraded to tropical storm status and given the name Tropical Storm Lee. The biggest threat from Lee is heavy rain and major flooding issues along the Louisiana, Mississippi and Alabama coasts.  With Labor Day weekend approaching this weekend, Tropical Storm Lee will likely ruin the beach plans for many people along the Gulf Coast. Tropical Storm Lee could become a strong tropical storm or even a Category 1 hurricane before it moves inland.

As of the 8 a.m. EDT (12 UTC) advisory on September 2, Lee had developed sustained winds of 35 miles per hour (mph) and a pressure of 1005 millibars.  Now winds are higher, since a system must have winds of at least 40 mph to receive the tropical storm designation. Lee will have plenty of time over the Gulf of Mexico’s very warm waters to strengthen. The system is looking more symmetrical.  Here is the forecast track from the National Hurricane Center: 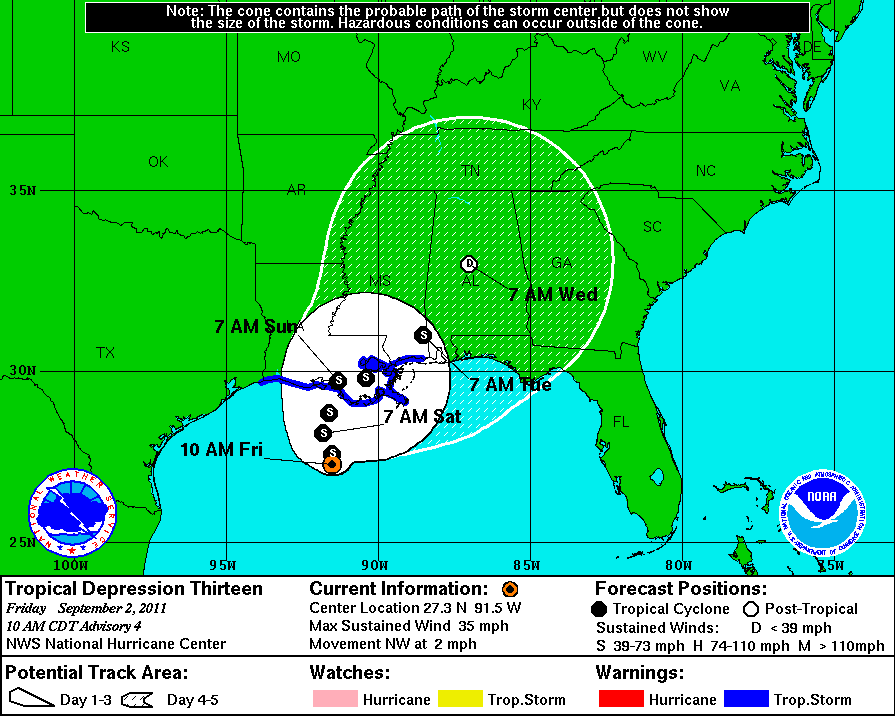 Here’s what the projected five-day rain total looks like for the United States from the Hydrometeorological Prediction Center:

HPC rainfall forecast for the next five days. Over a foot of rain along Louisiana coast and in New Orleans. Image Credit: Hydrometeorological Prediction Center

Based on the image above, Louisiana could see as much as 17.1 inches of rain over the next five days. Tropical Storm Lee is projected to meander and barely move along the central Gulf of Mexico for the next couple of days. In simple terms, there is nothing that will influence or steer the depression away from the coast this weekend until a cold front begins to sweep to the southeast.  Once the depression feels the front from the north, Lee will likely begin to move northeast into the southeastern United States.  The interaction of the front and the tropical system could produce a lot of much-needed rain across the southeastern U.S.  With that in mind, heavy rain will continue for areas that actually need the rain.  However, over 12 inches of rain for any area is too much.  Flash flooding is very likely, and we could be seeing major flooding problems along the Gulf Coast, especially around the New Orleans area.  Unfortunately, Texas will not see any rain from this system.  (Poor Texas!) 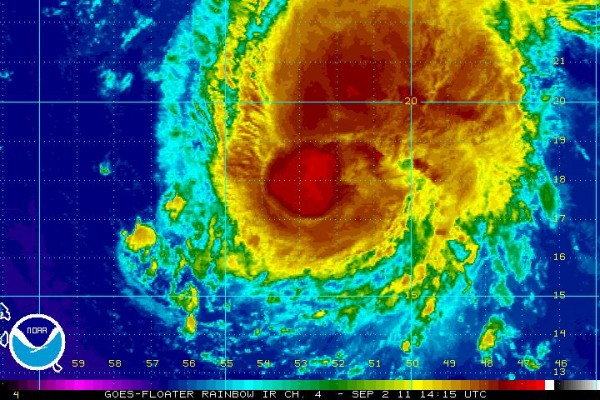 Katia, which is currently in the Central Atlantic, was downgraded into a tropical storm yesterday as wind shear weakened the system slightly. As of the 11 a.m. advisory, Katia is now a hurricane with 75 mph winds. A lot of the models are shifting the track of Katia farther west, so it is very possible that this system could get extremely close to the United States (similar to Irene).  If Katia remains relatively weak, the better chances this storm has of moving farther west towards the United States. Model runs are forecasting a ridge of high pressure building to the north of Katia in five days, which would steer the system farther west.  Everyone along the eastern United States coast and Bermuda should keep a close eye on this system.  We will likely be talking about Katia by early next week.

In regards to steering, Tropical Storm Lee and Katia could influence each other by next week depending on how strong they become.  If Lee strengthens into a significant tropical storm, a ridge – sinking, dry air – could form around Florida based on the storms’ interaction with each other.  This would create a dome of high pressure between Lee and Katia. If this occurs, then it could force Katia to move farther northwest (instead of westerly).  As a result, it could be enough to push Katia away from the United States.  It will be very interesting to see how these two systems might interact with each other. Stay tuned. Next week could be interesting.

Tropical Storm Lee in the Gulf of Mexico as seen on September 2, 2011

Bottom line: Tropical Storm Lee in the Gulf of Mexico has the potential to cause major flooding across Louisiana, Mississippi, Alabama and Georgia on or after Labor Day weekend 2011.  New Orleans could easily see over a foot of rain (12 inches +).  Lee is the biggest storm threat for the United States right now.  Katia – in the Central Atlantic – will have to be watched by early next week.  If the model runs shift farther west, then Katia could become another threat to the United States.