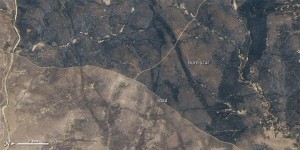 Kruger National Park in South Africa after a hot, intense burn in 2010 prescribed to kill off woody shrubs that had encroached on grassland. NASA’s Earth Observing-1 (EO-1) satellite acquired this image on September 18, 2010.

Thank you! Your submission has been received!
Oops! Something went wrong while submitting the form.
END_OF_DOCUMENT_TOKEN_TO_BE_REPLACED