With 33 eruptions as of August 27, Steamboat geyser in Yellowstone National Park is having an exceptionally active year.

The video below – showing steam from Steamboat geyser – is from the National Park Service, which warned:

When Steamboat Geyser erupts, dissolved minerals in the spray can damage glass and paint on your vehicle.

In the Yellowstone Volcano Observatory’s monthly update in early September, the U.S. Geological Survey (USGS) announced that Steamboat geyser – one of Yellowstone’s famous geysers, often said to be Earth’s tallest geyser – had broken its own yearly eruption record. USGS said:

August 2019 was another record-setting month for Steamboat geyser, which experienced water eruptions on August 12, 20, and 27. The August 27 eruption was the 33rd of 2019, breaking the record for eruptions in a calendar year that was set in 2018.

There was another eruption on September 3. Follow Steamboat’s eruptions via the National Park Service.

Unlike Old Faithful – a highly predictable geyser, also in Yellowstone Park, which has erupted every 44 to 125 minutes since the year 2000 – Steamboat Geyser is unpredictable. Major eruptions have been observed from this geyser on timescales from 4 days to 50 years apart. Steamboat geyser saw an uptick in eruptions in the 1960s after being dormant for about 50 years, for example. It also saw increased eruptions in the 1980s. But, until 2018, Steamboat geyser had been mostly calm for about 15 years.

Nowadays, the Yellowstone Volcano Observatory (founded in 2001) monitors this type of activity in the Yellowstone National Park region, home to Earth’s largest and most diverse collection of natural geothermal features, including not just geysers but also hot springs, mud pots and fumaroles. Its many thermal features are the reason Yellowstone became the first U.S. national park in 1872.

Sometimes, nobody sees the eurptions from Steamboat geyser. The Yellowstone Volcano Observatory tracks them using sensors in Norris Geyser Basin. Data from the sensors includes seismic and temperature data and can help scientists determine when a geyser has erupted, especially one the size of Steamboat. 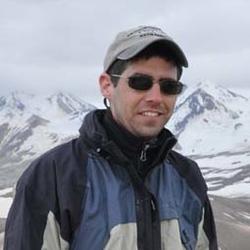 Michael Poland is Scientist-in-Charge at the Yellowstone Volcano Observatory. Image via USGS.

According to scientists, there’s no cause for concern about the recent uptick in activity from Steamboat geysers. It’s just the way geysers work. Michael Poland, the USGS scientist-in-charge of the Yellowstone Volcano Observatory, wrote in an email to CNN:

They’re mostly random and experience phases of alternating eruptive activity. So while fascinating, it’s not unusual, nor cause for concern.

– 128 located quakes in August, including a swarm near West Thumb

By the way, about being the tallest geyser in the world … steam from Steamboat geyser has been said to rise upward to heights of up to 380 feet (116 meters). That’s about three time as high as the bursts from Old Faithful geyser. This year – for the August 27 eruption – there is a report of its rising even higher: 403 feet or 123 meters. I could not find confirmation of that report, which I found on the Flickr page of James St. John, a geologist at Ohio State University. He wrote:

An inclinometer reading taken by an on-site observer showed that Steamboat erupted to 403 feet high!

On the other hand, compare Steamboat geyser to the geysers on Saturn’s moon Enceladus. This little Saturnian moon – only 310 miles (500 km) in diameter – is thought to have a global ocean of liquid salty water beneath its icy crust. Jets of icy particles from that ocean gush into space continuously from Enceladus. The material shoots out at about 800 miles per hour (400 meters per second) and forms a plume that extends hundreds of miles into space. Some of the material falls back onto Enceladus, and some escapes to form Saturn’s E ring. Read more about Enceladus. 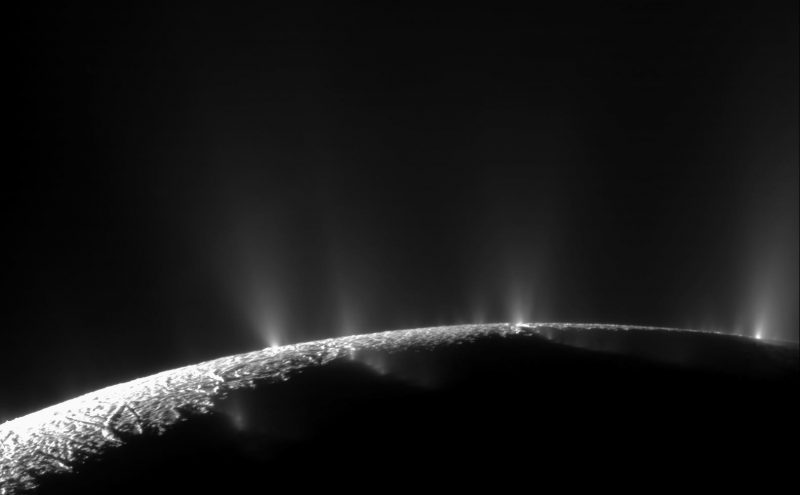 Bottom line: Steamboat geyser in Yellowstone National Park broke its own yearly eruption record on August 27, 2019, with its 33rd eruption of the year. The earlier record for eruptions in a calendar year was set in 2018.