On January 6, cold air passing over the warm waters of Lake Michigan created a phenomenon known as steam-fog. Here’s a NASA satellite image. 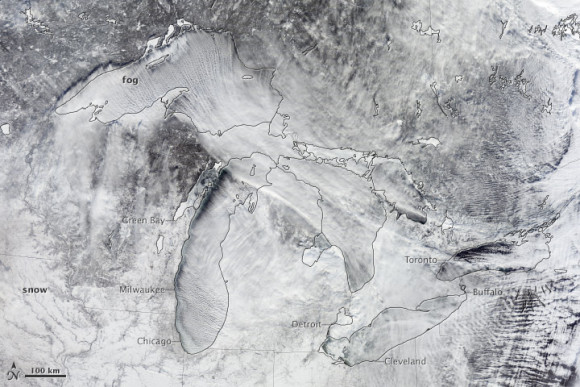 On January 6, NASA’s Terra satellite captured this natural-color image of steam-fog forming over Lake Michigan and Lake Superior and streaming southeast with the wind.

In early January, a swirling mass of Arctic air moved south into the continental United States and began breaking off from the polar vortex, a semi-permanent low-pressure system with a center around Canada’s Baffin Island. The frigid air was pushed south into the Great Lakes region by the jet stream, bringing abnormally cold temperatures to many parts of Canada and the central and eastern United States.

When the cold air passed over the relatively warm waters of Lake Michigan and Lake Superior, the contrast in temperatures created a visual spectacle. As cold, dry air moved over the lakes, it mixed with warmer, moister air rising off the lake surfaces, transforming the water vapor into fog — a phenomenon known as steam-fog. 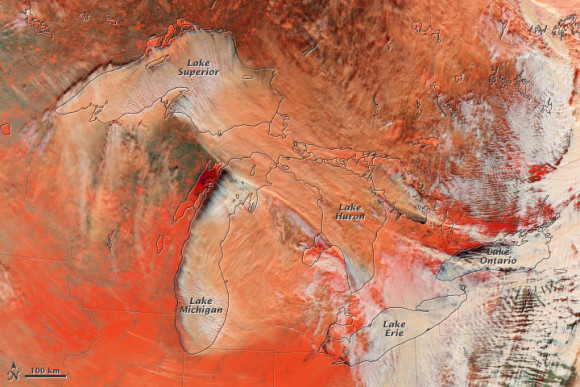 The image above is the same as at the top of this post, but it’s a false-color image. It helps illustrate the difference between snow (bright orange), water clouds (white), and mixed clouds (peach). Water clouds are formed entirely by liquid water drops; mixed clouds contain both water droplets and ice crystals.

What’s a polar vortex? The science behind Arctic outbreaks, from Weather Underground.