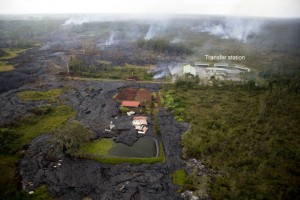 The village of Pahoa lost its first home to Kilauea’s June 27 lava flow earlier this week. Clouds have prevented our satellites from acquiring images clear enough to share in recent days, but the U.S. Geological Survey’s Hawaiian Volcano Observatory has been posting photography taken during frequent aerial surveys. This image — taken on November 12, 2014 — shows debris left over after the lava engulfed its first home in Pahoa. Lava bypassed the garage, which still stands at the center of the image. It briefly entered the fish pond next to the house before continuing downslope.

Read more about it from the Hawaiian Volcano Observatory at
https://hvo.wr.usgs.gov/multimedia/index.php?newSearch=true&display=custom&volcano=1&resultsPerPage=20

Read about the destruction of the first house from the Atlantic at
https://www.theatlantic.com/national/archive/2014/11/lava-from-Kilauea-volcano-ignites-first-house-pahoa/382620/

Thank you! Your submission has been received!
Oops! Something went wrong while submitting the form.
END_OF_DOCUMENT_TOKEN_TO_BE_REPLACED