On Friday June 29, triple-digit temperatures in the Washington DC area made history and toppled old records. Then a storm rolled through.

Virginia Gov. Robert F. McDonnell declared a state of emergency today and authorized the National Guard to assist with clearing trees and directing traffic in the Washington DC area, following last night’s sudden and violent storm. The storm in the DC area on June 29, 2012 – which occurred between 9:30 and 11 p.m. local time, following a day of recording breaking triple digit temperatures in the DC area – killed at least five people, uprooted thousands of trees and left more than 1.3 million homes and businesses without power in Maryland, Northern Virginia and Washington DC.

The June 29 storm in the DC region might have been caused by a derecho. The storm traveled about 600 miles in 10 hours at an average speed of 60 mph. (Storm Prediction Center)

Temperatures in the Washington DC area “made history and toppled old records” on Friday, June 29, according to the Washington Post. The Post’s Capital Weather Gang today called the June 29 storm, which packed wind gusts of 60 to 80 miles per hour:

… one of the most destructive complexes of thunderstorms in memory. 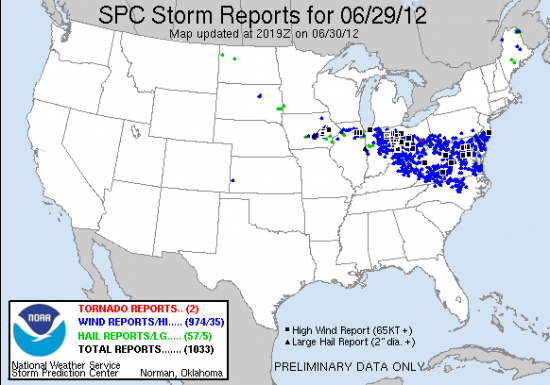 There were over 800 reports of damaging winds following the June 29, 2012 storm in the DC region.

This is not the DC storm of June 29, but meteorological conditions might have been similar. This is an image of a shelf cloud that pushed into Alabama on June 11, 2012. It is the leading edge of that derecho. Image Credit: Mike Wilhelm. For a similar image of the June 29 derecho, look here.

The storm appears to have been caused by a derecho, which is a violent storm system that can produce widespread wind damage across a large area and is associated with a band of rapidly moving band of showers and thunderstorms. Another violent derecho appears to have occurred on June 11, 2012, affecting parts of Missouri, Tennessee, Kentucky, Arkansas, Mississippi, and Alabama. What you need to know about derechos.

According to the Washington Post, Gov. McDonnell said the storm triggered:

… Virginia’s largest non-hurricane power outage in history and forced the closure of 250 secondary and rural roads because of fallen trees.

The DC region is still under an excessive heat warning from the National Weather Service on Saturday (June 30). Libraries and swimming pools in the DC region have been opened today to give residents without power escapes from the heat,

Read more from the Washington Post about the recovery