Some perspective on winter 2014

U.S. winter of 2013-14 was only 1°F below average, but it followed two warmer-than-average winters. Did that fact make this winter seem colder than it was? 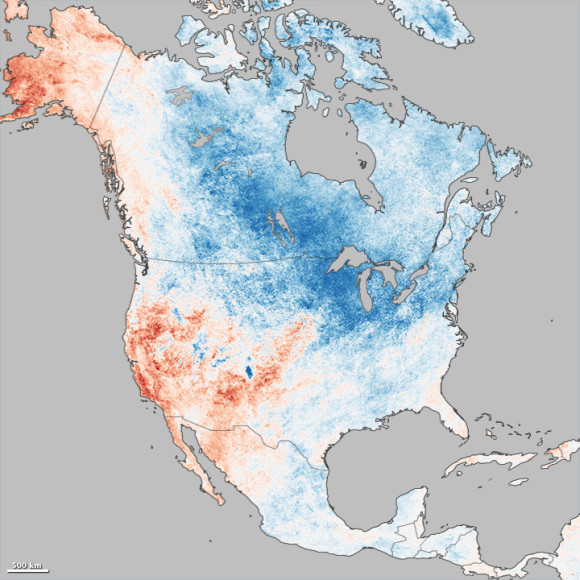 This map is based on data from NASA’s Terra satellite. It depicts temperatures for December 2013 to February 2014 compared to the 2000–2013 average for those months. Areas with warmer than average temperatures are shown in red; near-normal temperatures are white; and areas that were cooler than normal are blue. Image via NASA

For people in the middle and eastern part of North America, the winter of 2013-14 has felt like one of the coldest in many years. Waves of Arctic air brought extended periods of cold weather and above-average snowfall. Seven Midwestern states had one of their top-10 coldest winters, and the Great Lakes were chilled until they reached nearly 91 percent ice cover. Even portions of Mexico and Central America were cooler than normal.

But human memory is not a scientific measure, and long-term perspective tends to get lost in everyday conversation and news coverage. The winter of 2013-14 followed two winters that were significantly warmer than the norm, which likely made this season feel worse than it was, according to researchers at the U.S. National Climatic Data Center (NCDC). They reported that the average temperature of the contiguous U.S. for the winter was just 0.4° Celsius (31.3° Fahrenheit), about 1°F below average. In fact, in the U.S., winter 2013-2014 was only the 34th coldest winter in 119 years of record-keeping.

How can that be, when so many felt so cold? It’s because most of the U.S. west of the Rocky Mountains was warmer and drier than average. Warmer temperatures in the West offset the cold snaps to the East. California had its hottest winter on record, and several other states came close.

Though it is not included in the contiguous U.S. measurements, Alaska also thawed this winter in spring-like heat and rain that melted snow and ice.

The map above puts the North American winter in wider context. On a global scale, land temperatures for the December through February period were actually the 10th warmest in the modern record, according to NCDC, 0.87°C (1.57°F) above the 20th century average.

Far eastern Asia, particularly China and eastern Russia, were significantly warmer than normal. In Europe, Austria and The Netherlands observed the second warmest winters in their records, and Switzerland its third warmest. With temperatures as much as 5°C above normal, spring crops and plants began sprouting several weeks early across much of Europe. And in the southern summer, the extended heat waves in Australia and Argentina stand out.