Scientists have discovered a 48-million-year-old fossil food chain in Germany. It’s a snake with a lizard in its stomach, which in turn had eaten a beetle. 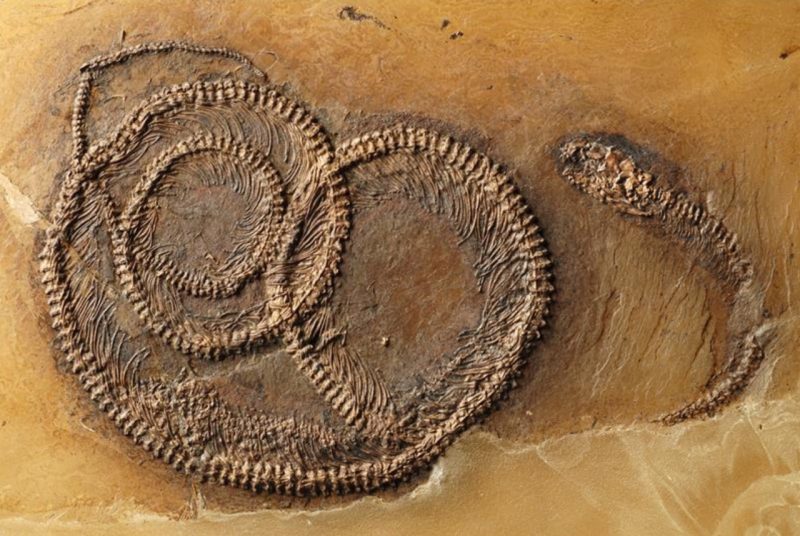 A rare fossil find from Messel Pit in Germany. See the annotated image below. Image via Springer Heidelberg and Alpha Galileo.

Senckenberg – which has six research institutes in bio- and geosciences, plus three natural history museums in Germany – announced in September 2016 that one of its scientists had made a spectacular discovery from an old quarry in Germany, a site known for its abundance of fossils, called Messel Pit. It’s a fossil snake in whose stomach a lizard can be seen, which in turn had consumed a beetle. The discovery of the approximately 48-million-year-old fossil food chain is unique for the Messel Pit, the statement said. In fact, worldwide:

… only a single comparable piece exists.

Krister Smith of Senckenberg made the discovery in cooperation with Agustín Scanferla of CONICET in Argentina. They published their study in Senckenberg’s scientific journal Palaeobiodiversity and Palaeoenvironments. The researchers said in their statement:

Fossil food chains are extremely rarely preserved; due to the excellent level of preservation at the fossil site, leaves and grapes from the stomach of a prehistoric horse, pollen grains in a bird’s intestinal tract and remains of insects in fossilized fish excrements had previously been discovered at Messel. However, until now, we had never found a tripartite food chain … To this day, only one other example of such fossil preservation has been found worldwide, in a 280-million-year-old shark.

Using a high-resolution computer tomograph, [we] were able to identify both the snake and the lizard to the species level.

The fossil snake is a member of Palaeophython fischeri; the lizard belongs to Geiseltaliellus maarius, which has only been found at Messel to date.

The snake measures about 40 inches (103 cm) in length, meaning it’s significantly smaller than other specimens of this species and might be a juvenile (and a relative of the modern-day boas). The lizard measures approximately about 8 inches (20 cm) from its head to the tip of its tail. Some of the snake’s ribs can be seen to overlap the lizard, clearly indicating that the lizard is inside the snake.

Unfortunately, we were unable to unambiguously identify the beetle – it was not well enough preserved to do so …

Since the stomach contents are digested relatively fast and the lizard shows an excellent level of preservation, we assume that the snake died no more than one to two days after consuming its prey and then sank to the bottom of the Messel Lake, where it was preserved. 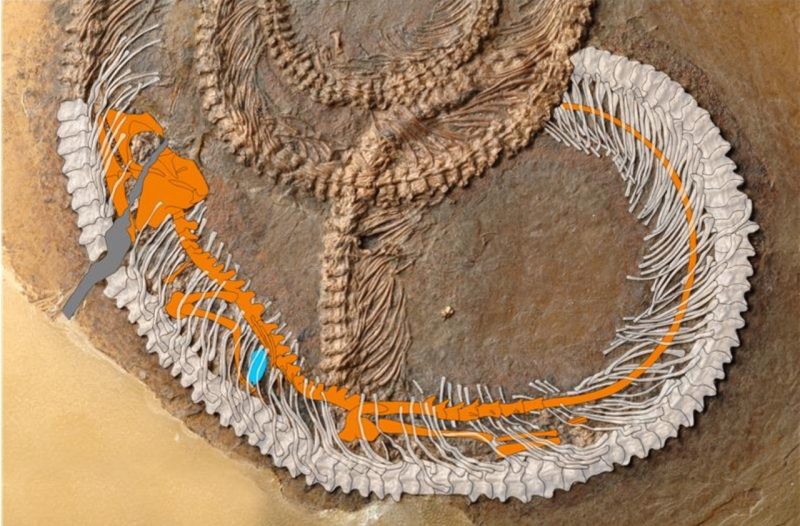 Orange outlines the body of the lizard. The white indicates the snake’s ribs, some of which overlap the lizard, showing it’s inside the snake. The blue indicates an insect, thought to be a beetle. Image via Springer Heidelberg and Alpha Galileo.

Bottom line: Scientists at Senckenberg in Germany and CONICET in Argentina have discovered a 48-million-year-old fossil of a snake with a lizard in its stomach, which in turn had eaten a beetle.