This is only the second time that astronomers spotted an asteroid before it struck Earth’s atmosphere. It underscores the need to be watching for these objects.

Astronomers say that a very small asteroid entered Earth’s atmosphere on January 2, 2014, after being discovered only one day before. They’ve labeled the object 2014 AA, because it’s the first asteroid to have been discovered this year. The Minor Planet Center announced that the asteroid struck Earth’s atmosphere at around 05:00 UTC on January 2. That’s around midnight, early morning on January 2 on the U.S. East. The asteroid – which is believed to have been from about 1 to 5 meters across – is thought to have burned up over the Atlantic Ocean, probably off the coast of western Africa. 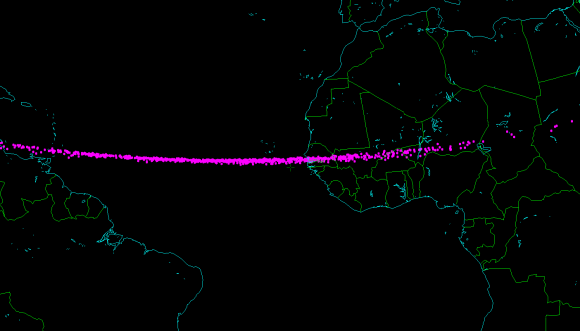 Map of the possible impact points of 2014 AA, produced by astronomer Bill Gray. The asteroid could have impacted Earth’s atmosphere anywhere along this line. Most likely landing place is off the west coast of Africa, in the Atlantic Ocean. 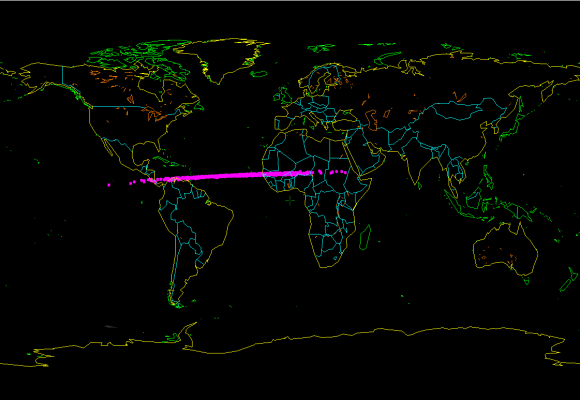 Map of the possible impact points of 2014 AA, produced by astronomer Bill Gray. The asteroid could have impacted Earth’s atmosphere anywhere along this line. Most likely landing place is off the west coast of Africa, in the Atlantic Ocean.

This is only the second time ever that astronomers were able to spot an asteroid before it struck Earth’s atmosphere. The first time was in 2008, when the object known as 2008 TC3 burned up over Sudan in Africa. Like 2014 AA, that object was discovered just a day before it entered Earth’s atmosphere.

Astronomers with the Mount Lemmon Survey used a 60-inch (150 cm) telescope in Arizona to spot 2014 AA on January 1, 2014 at 6:20 UTC (1:20 a.m. EST). Other astronomers quickly confirmed its presence. A calculation of the asteroid’s orbit showed it was very close to Earth, and getting closer.

According to astronomer Pasquale Tricarico, the asteroid approached the Earth from its night side. However, he said, there are large uncertainties over the time and location of the atmospheric entry of this asteroid, because only 7 observations were made while the asteroid was still visible.

Calculations by astronomer Bill Gray show that it could have entered the atmosphere between Africa and Central America.

No harm done. But the event underscores the need to watch out for near-Earth asteroids.

The view from asteroid 2014 AA on January 2 as it collided with Earth. Animation via Pasquale Tricarico via Ernesto Guido via Wired.

Bottom line: A small asteroid – probably 1-5 meters across – probably burned up over the Atlantic Ocean around midnight on the morning of January 2, 2014. Astronomers have labeled it 2014 AA.