Slushy wave off coast of Nantucket

Sure, the ocean freezes. But this photo of partly frozen waves – caught by photographer and surfer Jonathan Nimerfroh – fascinated even the experts. 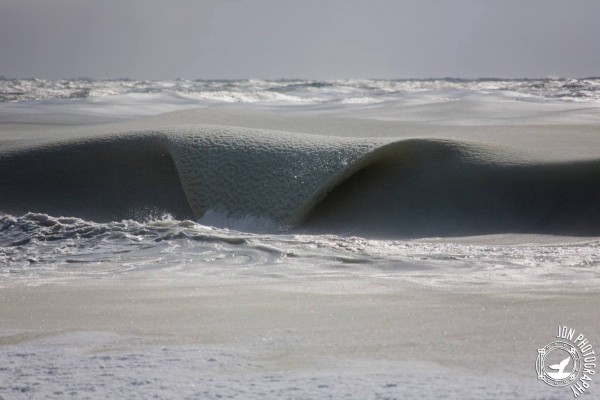 As you well know if you live there, the eastern United States has been in a deep freeze throughout February, 2015. Wave after wave of ice and snowstorms have hit the region, and NASA says that hundreds (maybe thousands) of records have been set for daily low temperatures. Now, from a photographer and surfer in Nantucket, Jonathan Nimerfroh, we have this amazing photo from February 20, 2015 of an ocean wave, just before it freezes solid. He calls it a slurpee wave.

The New York Times has a great article about this photo and these slow-moving waves of slush. Jonathan’s photo has also been on the Weather Channel and other places (I first saw it on Facebook; thanks, Beverly Spicer!). Nimerfroh told the New York Times:

I just noticed a really bizarre horizon. The snow was up to my knees, getting to the water. I saw these crazy half-frozen waves. Usually on a summer day you can hear the waves crashing, but it was absolutely silent. It was like I had earplugs in my ears.

Of course, the ocean does freeze. Salty sea water has a lower freezing point than the ice in your home freezer, not 32 degrees F but instead about 28.4 degrees F. And it was colder than that on that day in Nantucket, somewhere around 10 degrees F. Still, these waves are something very special, and even experts commented that they had not seen them before. Helen Fricker, a glaciologist at the Scripps Institution of Oceanography in La Jolla, California, who studies the dynamics of ice flows in Antarctica, told the New York Times that a full scientific explanation was “outside her expertise.” Erin Pettit, a glaciologist at the University of Alaska, Fairbanks, added that waves in Alaska tend to break up sea ice and said:

Nimerfroh said he returned the following day to the same beach. That day it was a few degrees colder still and the water had completely frozen. He said:

Nothing was moving. There were no waves anymore.

Bottom line: Wave caught in the act of freezing at a Nantucket beach, February 2015, by Jonathan Nimerfroh.