Biologists have discovered a nocturnal hunting spider that can steer while falling. Watch it glide!

A group of biologists working in Panama and Peru have discovered a type of nocturnal hunting spider, about two inches across, that is able to steer while falling, much like a wingsuit flyer, in order to return to the tree from which it fell.

The spider joins a small number of non-flying insects – ants, bristletails and some insect larvae – known to have the ability to maneuver while falling instead of dropping like a rock, according to Robert Dudley, a professor of integrative biology at the University of California, Berkeley. Dudley is one of the authors of a paper about the spider in the August 19 issue of the journal Interface of the Royal Society. He said:

My guess is that many animals living in the trees are good at aerial gliding, from snakes and lizards to ants and now spiders. If a predator comes along, it frees the animal to jump if it has a time-tested way of gliding to the nearest tree rather than landing in the understory or in a stream.

Forest floor predators or fish would quickly make a meal of a grounded tree-dweller.

The spider, from the genus Selenops, is the only arachnid the researchers found that was able to do this. Other arachnids – scorpions, pseudoscorpions, whip scorpions and even other types of spiders – merely plummeted to earth.

The 59 individual Selenops spiders the team studied were all well-adapted to skydiving. They are “wafer thin,” Dudley said, and flexible; they maneuver by spreading their legs wide in order to use lift and drag to steer themselves toward the tree trunk when they fall. If they fall upside down, they’re able to right themselves in midair. The biologists occasionally saw spiders bounce off the trunk, recover and maneuver back to the trunk a second time for a successful landing. 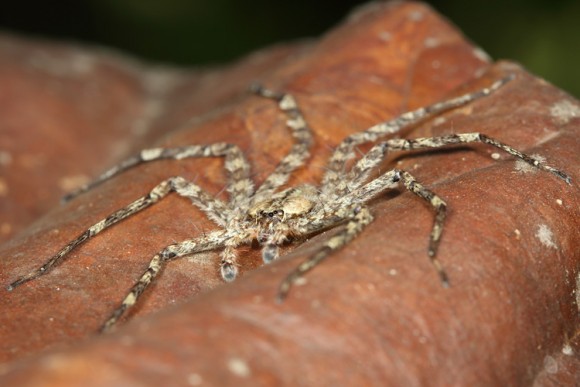 This spider from the genus Selenops is about two inches across and hunts in the tree canopy at night for its prey.Photo credit: Stephen Yanoviak / University of Kentucky.

The research team has been studying gliding insects in tropical forests for more than a decade, after discovering a group of ants that unfailingly land on a tree when accidentally brushed off a branch. This led them to toss from a tree every non-flying arthropod they could find to see which animals glided. Researcher Stephen Yanoviak is a professor of biology at the University of Louisville in Kentucky. He said:

As far as adult arthropods are concerned, only ants, bristletails and spiders use directed aerial descent. However, the wingless immature stages of various insects that are winged as adults can also glide really well. These include cockroaches, mantids, katydids, stick insects and true bugs.

Dudley is interested in directed aerial descent because controlled gliding, he thinks, may have been the predecessor to flying, as animals learned how to use their arms and legs to gain lift in addition to maneuvering in freefall. He said:

This type of aerial behavior preceded the origin of wings.

Bottom line: A group of biologists working in Panama and Peru have discovered a type of nocturnal hunting spider that is able to steer while falling. Their research appears in the August 19, 2105 issue of the journal Interface of the Royal Society.