Decreased wingspan in cliff swallows may be an adaptation to the threat of motor vehicles. 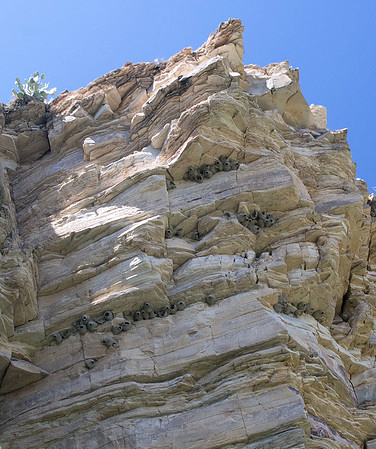 During the breeding season, cliff swallows gather in colonies, building quaint little mud nests to house their young. The ideal nesting location has a suitably spacious surface on which to fashion the earthen nurseries, and preferably a bit of protective overhang as well. Cliff sides will do, but the birds increasingly favor man-made structures such as bridges and overpasses along roadways. In the early 1980s groups of cliff swallows took up residence in roadside structures near the Cedar Point Biological Station in southwestern Nebraska, and promptly began being killed by passing cars. Around the same time, researchers Charles Brown and Mary Bomberger Brown began a study of the birds. They’ve spent the past 30 years driving between the various nesting colonies and picking up any feathery carcasses they saw along the way. In doing so they noticed that, despite increases in overall swallow populations, the number of these birds being run down by motor vehicles actually declined in the three-decade period.

So cliff swallows have learned to avoid cars? Good for them. But there’s more to the story. Behavioral changes may account for some of the swallows’ success. They do exhibit social learning and could have learned the “cars bad” lesson from seeing another bird get hit or by having a close call themselves. But naïve youngsters weren’t making up the bulk of the dead bodies, as would be expected in this case. More importantly, the scientists also found physical changes in the birds, specifically in their wing lengths.

Their results, published in the latest issue of Current Biology, showed that swallows with longer wings were more likely to end up as road kill than those with shorter wings. Over time, the wing lengths in the general population shrank, while those of the birds struck by cars increased. This suggests that once motor vehicles became part of the environment, individuals with shorter wings were better adapted to it. Such birds were more likely to survive and reproduce than their longer-winged peers, thus nudging the population’s wing lengths toward the diminutive end of the spectrum. Essentially, changes in the birds’ anatomies may be driven by, well, driving. 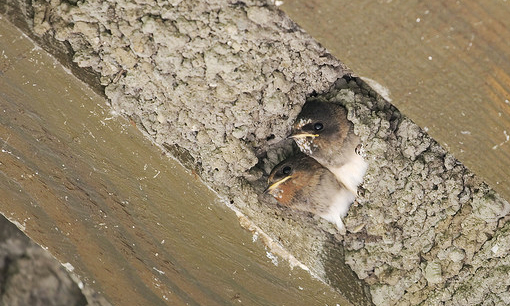 It’s impossible to say with certainty that cliff swallows developed shorter wings just because we kept hitting them with our cars. Other selective pressures, such as weather or food source changes, may also have played a role. The authors do offer an explanation for how shorter wings could make it easier to avoid being flattened by an SUV. Cliff swallows have an unfortunate habit of sitting in the road, and shorter wings would allow them to launch themselves into the air more vertically were a vehicle to approach, providing a quicker getaway. They also note that the decline in swallow-meets-car mortality can’t be attributed to fewer or smaller cars. Traffic levels of the roads involved did not decrease during the study, and if you’ve been around for the past 30 years, you’ve probably noticed that civilian automobiles have been steadily inching toward the size of military tanks.

If this is indeed a case of human-driven evolution, it would be in keeping with the trend. Our species’ activities have had notable impacts on the relative fitness of others. Many insects and bacteria have managed to adapt to the pesticides and drugs we use to kill them. Industrial pollution has been found to alter the shapes and sizes of certain animals (and not necessarily for the better), as has our peculiar style of predation (i.e., hunting and fishing). And those are just a few examples. We alter our environment at a startling pace, and anything sharing it has to adapt or die. If you want to see evolution in action, human-altered landscapes are among the best places to look.