Shock veins in Russian meteorite helped it break up

Damage from the February 15, 2013 meteor explosion over Chelyabinsk, Russia would have been more severe if the rock hadn’t fragmented high up in the atmosphere.

On February 15, 2013, a large meteor exploded in the sky above Chelyabinsk, Russia. The rock fragmented into smaller pieces high in the atmosphere, which spared the Earth from more serious damage that could have resulted from the estimated 500 to 600-kiloton explosion had it hit closer to ground. Scientists have now had a chance to study pieces of the meteorite that fell to Earth, and they found that the material contains numerous shock veins that likely facilitated the rock’s breakup as it approached Earth. 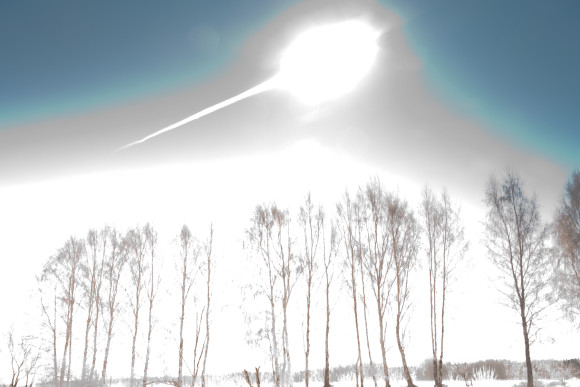 The meteor strike over Chelyabinsk, Russia in 2013 was the largest such event known to occur on Earth since the Tunguska strike in 1908. The shockwave from the Chelyabinsk explosion was strong enough to shatter glass in nearby buildings and knock people off of their feet. The event was highly recorded by modern technology and scientists have been busy this year analyzing the enormous amount of data that were generated.

According to a study that was published in the journal Nature on November 6, 2013, the large parent meteoroid was 19 meters (62 feet) wide as it approached the Earth. Then, the meteoroid fragmented into smaller pieces between altitudes of 45 to 30 kilometers (28 to 18.6 miles). This prevented much more serious damage from occurring on the ground, the scientists say.

Another study published in the journal Science on November 7, 2013, estimates that approximately three quarters of the meteoroid evaporated during the explosion. The remaining portions were either converted to dust or fell to the ground as meteorites. Less than 0.05% of the original mass is thought to have reached the ground. The largest surviving fragment was recovered from the bottom of Lake Chebarkul in October 2013.

A detailed analysis of the meteorite fragments revealed that the original object was 4,452 million years old—slightly younger than our solar system—and that it contained numerous “shock veins” that likely weakened the rock and facilitated its breakup as it entered Earth’s atmosphere. Shock veins are common in meteorites and they form when the parent material, typically an asteroid, experiences a powerful collision with another large object in space. These collisions produce enough pressure and heat to melt portions of the rock, which then re-solidify into a vein-shaped pattern. 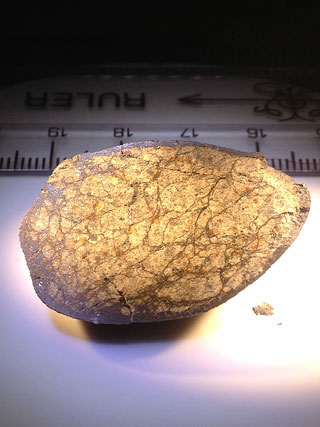 Scientists are still trying to determine the exact origin of the meteoroid, but they think that it came from the asteroid belt in between Jupiter and Mars.

Bottom line: Two new studies of the February 15, 2013 meteor explosion over Chelyabinsk, Russia were published in early November. The analyses revealed that the original object was 4,452 million years old and that it contained numerous “shock veins” that helped to weaken the rock and facilitate its breakup as it entered Earth’s atmosphere. Breakup of the meteoroid high in the atmosphere prevented much more serious damage from occurring on the ground, the scientists say.

Insights from space rocks left after meteor exploded over Russia