North Atlantic right whales have lost 63 to 67 percent of their communication space in the Stellwagen Bank National Marine Sanctuary due to noise from ships.

Scientists estimate that critically endangered North Atlantic right whales have lost 63 to 67 percent of their communication space in the Stellwagen Bank National Marine Sanctuary due to noise created by passing ships. The paper was published on August 14, 2012 in an early online edition of the journal Conservation Biology.

The North Atlantic right whale is one of the rarest marine mammals. Only 350 to 400 whales are believed to currently exist. They are spectacularly large and can grow up to 45 to 55 feet (13.7 to 16.7 meters) in length and weigh up to 70 tons (63,500 kilograms). They feed on plankton, particularly copepods, by straining seawater through baleen plates located in their mouths. 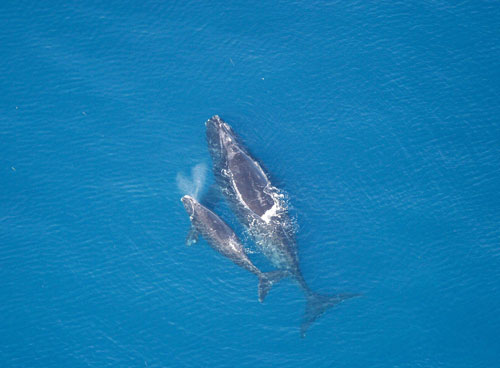 To study how noise impacts North Atlantic right whales, a group of scientists placed several acoustic recording devices in the Stellawagen Bank National Marine Sanctuary – a critical feeding ground for right whales – and compared the noise from ships today to historically lower noise levels that existed nearly a half century ago. They estimate that right whales have lost 63 to 67 percent of their communication space in the sanctuary and surrounding waters. The louder ambient noise created by today’s busy world appears to be reducing the ability of the whales to detect calls from other whales.

You can listen to what communication masking sounds like on the Cornell University Whale Listening Project’s website. First, listen to a typical right whale call at the top of the webpage. Then, try to see if you can hear the whale call within the recording from a noisy shipping lane. I could not. However, I did listen to a lot of loud music as a teenager. 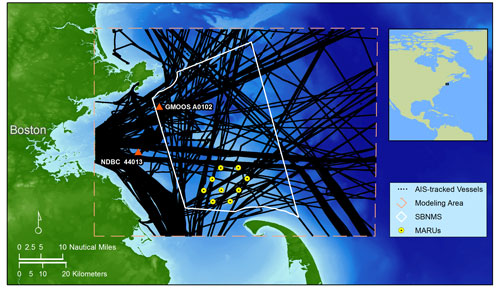 Leila Hatch, a marine ecologist at the Stellwagen Bank National Marine Sanctuary and lead author of the paper, commented on the findings in a press release. She said:

A good analogy would be a visually impaired person, who relies on hearing to move safely within their community, which is located near a noisy airport. Large whales, such as right whales, rely on their ability to hear far more than their ability to see. Chronic noise is likely reducing their opportunities to gather and share vital information that helps them find food and mates, navigate, avoid predators and take care of their young.

Christopher Clark, director of Cornell’s bioacoustics program and co-author of the work also commented on the findings. He said:

We had already shown that the noise from an individual ship could make it nearly impossible for a right whale to be heard by other whales. What we’ve shown here is that in today’s ocean off Boston, compared to 40 or 50 years ago, the cumulative noise from all of the shipping traffic is making it difficult for all the right whales in the area to hear each other most of the time, not just once in a while. Basically, the whales off Boston now find themselves living in a world full of our acoustic smog.

It remains to be seen just how the underwater noise and decreased communication space may impact the right whales ability to survive and reproduce.

A previous study published on February 8, 2012 in Proceedings of the Royal Society found that decreased shipping noise in the Bay of Fundy, Canada after the events of September 11, 2011 was associated with a decrease in the right whales stress hormone levels. Long-term elevation of stress hormones is known to have negative health effects in many different species.

We are starting to quantify the implication of chronic, human-created ocean noise for marine animals. Now, we need to ask how we can adapt our management tools to better address these problems.

Bottom line: Scientists estimate that critically endangered North Atlantic right whales have lost 63 to 67 percent of their communication space in the Stellwagen Bank National Marine Sanctuary due to noise created by passing ships. The paper was published on August 14, 2012 in an early online edition of the journal Conservation Biology.

Whales fall through the research net