In recent studies, sharks had a simple reaction to a wide range of electric fields, suggesting their system is tuned for one thing: catching prey. 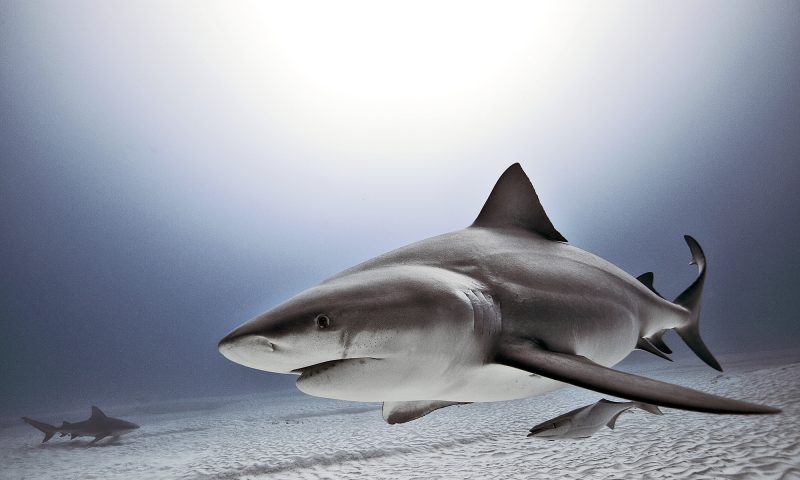 Sharks are known to have some of the most sensitive electroreceptors in the animal world. That is, special pores around a shark’s face can detect the electrical currents which emanate from undersea organisms and which are carried with great efficiency through salt water. It’s as if sharks have a special sixth sense, which lets them hunt underwater, despite the fact that they don’t see very well. In late May 2018, physiologists at the Julius Lab at University of California, San Francisco, announced their new work comparing the electroreception abilities of sharks versus fish called skates. David Julius, a senior author on the new study, said:

Sharks have this incredible ability to pick up nanoscopic currents while swimming through a blizzard of electric noise. Our results suggest that a shark’s electrosensing organ is tuned to react to any of these changes in a sudden, all-or-none manner, as if to say, “attack now.”

Post-docs Nicholas W. Bellono and Duncan B. Leitch led the work, with Julius acting as a senior advisor. The team showed that the shark’s responses to electric fields propogating through sea water appear to be very different from that of skates, which are cousins of sorts to sharks and sting rays. This response might help explain why sharks appear to use electric fields strictly to locate prey.

Skates, on the other hand, use them to find food, friends, and mates. 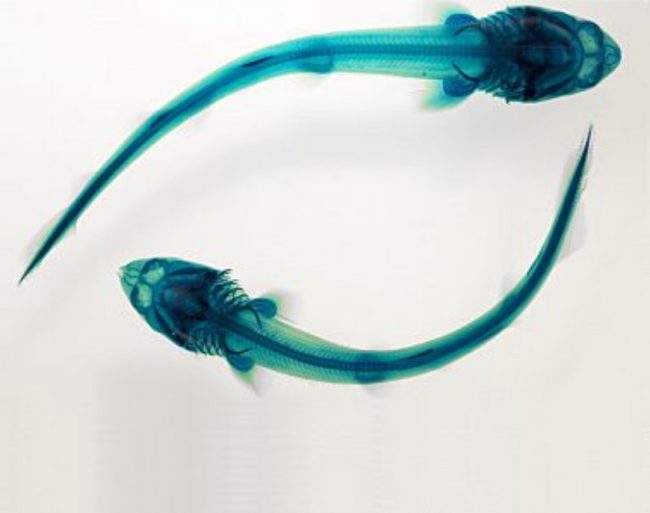 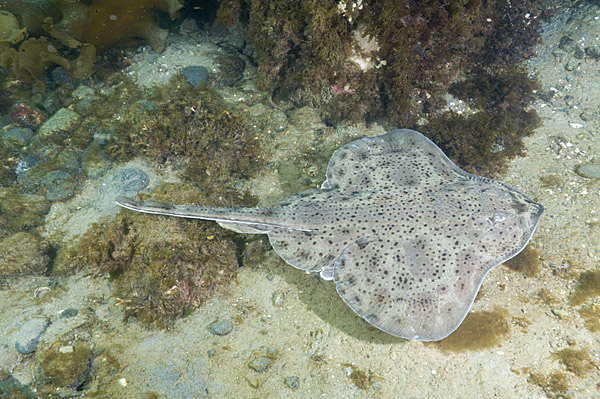 Male little skate, Leucoraja erinacea, in the North Atlantic, off the coast of the U.S. state of Massachusetts. Image via Elasmodiver.

These scientists are physiologists; they study how the bodies of sharks, or skates, or humans, do what they do. Their recent work also delved into the genetics and specific body chemicals underlying sharks’ unique sixth sense. Their statement explained:

In both [sharks and skates], networks of organs, called ampullae of Lorenzini, constantly survey the electric fields they swim through. Electricity enters the organs through pores that surround the animals’ mouths and form intricate patterns on the bottom of their snouts. Once inside, it is carried via a special gel through a grapevine of canals, ending in bunches of spherical cells that can sense the fields, called electroreceptors.

Finally, the cells relay this information onto the nervous system by releasing packets of chemical messengers, called neurotransmitters … 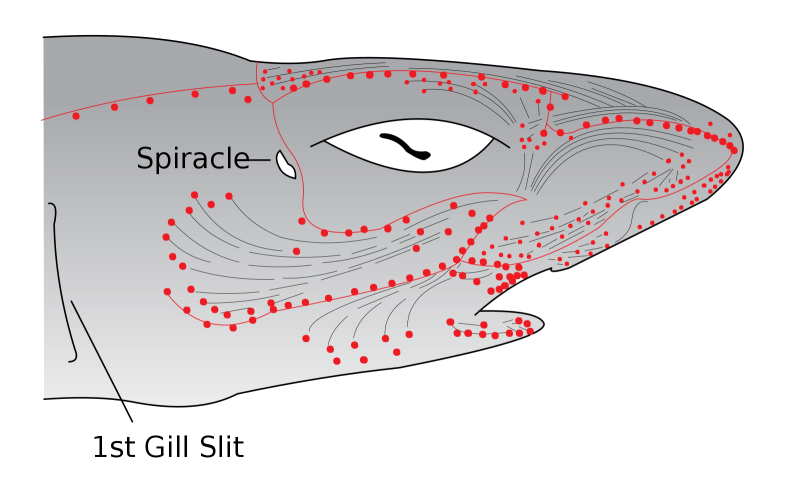 In sharks, the electroreceptors are pore-like structures called ampullae of Lorenzini, shown here as red dots. Illustration via Chris_huh on Wikimedia Commons.

In this study, the team compared underwater electric currents in little skates versus a shark species known as a catshark. They found that although both cells were sensitive to the same narrow range of voltage zaps, the responses were very different. Shark currents were much bigger than skate currents and they were the same size and waviness for each zap. In contrast, the skate cells responded with currents that varied in both size and waviness to each zap.

Further experiments suggested that these contrasting responses may be due to different ion channel genes, which encode proteins that form tunnels in a cell’s membrane, or skin. When activated the tunnels open and create electrical currents by allowing ions, or charged molecules, to flow in and out of the cell. Nicholas Bellono commented:

In almost every way, the shark electrosensory system looks like the skate’s and so we expected the shark cells to respond in a graded manner. We were very surprised when we found that the shark system reacts completely differently to stimuli.

Ultimately, these differences affected how sharks and skates reacted to electric fields that mimicked those produced by prey. To test this, the researchers exposed sharks and skates swimming alone in tanks to a wide range of low voltage electric field frequencies and then measured their breathing rates. As anticipated, the skates had a variety of reactions. Some frequencies caused their breathing rates to rise above rest while others produced minimal changes. The results may help explain why a previous study found that skates may use their electrosensory perceptions to detect both prey and mates.

And the sharks? They basically had one simple reaction. Almost every field raised their breathing rates to a level seen when they smelled food, suggesting their system is tuned for one thing: catching prey.

By the way, last year, David Julius led a study showing the physiology behind how sharks and skates sense electric fields. At the time, he explained:

And, in case you’re wondering, yes, the human body also creates electrical impulses. It happens when our muscles contract. When we’re on land, the open air doesn’t conduct our electrical impulses away from our bodies. But salt water is a good conductor of electricity.

Bottom line: Researchers compared responses of sharks and skates to weak electrical fields carried in salt water. The sharks had a simple reaction to a wide range of fields, suggesting their system is tuned for one thing: catching prey.

Source: Molecular tuning of electroreception in sharks and skates