Severed cabbage head stills knows what time it is

Even after being harvested, cabbage can set its circadian clock and ward off insect pests.

Whether or not a human head retains consciousness after being abruptly severed – by say a guillotine – is a difficult matter to resolve. Anecdotes of post-execution blinking and biting aside, it’s not the kind of thing that tests well in a laboratory. At best, the head might (emphasis on might) be aware of its own predicament for 5 to 30 seconds before the lights dim. This is where plants have us beat. A head of cabbage, it turns out, maintains some of its functions for days after decapitation. While it can’t wink at you or ponder its mortality, it can respond to its environment in at least one way. A new study published in Current Biology shows that cabbages, along with several other plants, can adapt their circadian rhythms to maximize pest control even after they’ve been harvested.

Let’s break that down a bit, as we’re actually talking about several planty skills here; 1) having circadian rhythms in the first place, 2) possessing chemical tools to thwart hungry insects, and 3) being able ramp up the pesticide during the specific hours of the day that said insects do their munching. It sounds complicated, but an ordinary supermarket cabbage can manage all of these things, even after being rudely hacked out from the ground.

Like humans and other animals, plants have circadian clocks that are set by the 24-hour cycles of light and dark in their environment. These internal clocks can be modified – though not instantaneously – when an organism is placed in a different environment. For our species, this usually results from a change in time zones, but in plants grown in the lab, the same effect can be achieved by altering the on/off schedules of the light bulbs.

The natural pest resistance of cabbage and many of its relatives is due in part to chemicals called glucosinolates, which also contribute to the delicious (or revolting, depending on your preferences) taste of cruciferous vegetables. Using Arabidopsis plants (a cabbage cousin) grown under 12 hour cycles of light and dark, the researchers showed that these plants regulated their glucosinolate production by time of day for several rounds after the quasi-natural lighting was removed. Not only did they adapt to the cycles of night and day, but they increased their glucosinolate output at what they perceived as dawn, and then quickly tapered it at their equivalent of dusk – a pattern that would maximize pesticide during those hours when their insect predators are most active. 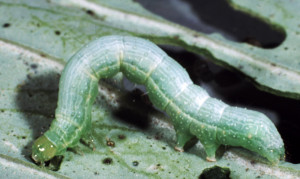 Not bad, but these plants were still rooted to the ground. What about the supermarket cabbage, plucked from the farm and seemingly lifeless? Could it still be taught new tricks? The team suspected the answer was yes. To test this, they subjected small disks of cabbage leaves to several different lighting conditions – constant light, constant darkness, and also two kinds of 12-hour light/dark cycles. One of these cycles matched those of the Trichoplusia ni larva (a plant loving caterpillar also known as the “cabbage looper”) while the other cycle was out of phase with that of the caterpillars. After being given time to acclimate to their lighting conditions, the cabbage leaves were pitted against ravenous cabbage loopers. Leaves that had been stored under the in-phase (matched to the larva) light/dark cycles were significantly better at defending themselves against insect attack than leaves kept in out-of-phase or constant light or dark conditions. The in-phase leaves lost less tissue, and the larva munching on them were much scrawnier than the fat caterpillars set loose on the out-of-phase leaves.

Effects of the different lighting conditions were also observed in the glucosinolate levels. Leaves stored in constant light or dark had no clue what time of day it was and produced a steadily low supply of the chemicals, while the in-phase leaves boosted glucosinolate during hours when they were most vulnerable to being eaten. Presumably the out-of-phase leaves varied their glucosinolate levels too, they just did it at the wrong time, poor dears. Kind of like when you set your alarm clock to PM instead of AM by mistake. You made the effort, but the results are less than ideal. 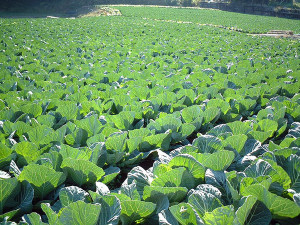 Impressive as this may be for a humble cabbage, you are perhaps still wondering what the point of it is. True, vegetables don’t have to worry much about insect predation in the grocery store or in your fridge. But there is the whole post-harvest storage and transport business to contend with. Setting up the right light/dark cycles could result in less damage to produce while it’s still in transit.

But you’ll probably be more interested in another piece of information – one of these larva-thwarting glucosinolates, 4-methylsulfinylbutyl (4MSO), has been linked to anticancer and antimicrobial benefits. So if stored under carefully-timed mood lighting and eaten at the right time of day, your cabbage could actually be better for you.* Though you may also need to forgo refrigeration to reap such benefits. Most of the team’s experiments were conducted at room temperature (22C) rather than fridge levels of 4C. (I’m guessing larvae don’t fare well in the cold.) They did, however, examine whether the regulation of 4MSO glucosinolate in cabbage leaves by lighting held up under refrigeration conditions. The good news is that yes, it did. The bad news is that the levels of 4MSO were lower overall in leaves stored at 4C than in those at room temperature.

In case you’re one of these weird people that don’t like cabbage and its ilk, you’ll be glad to know that the study found other produce similarly capable of setting their circadian clocks to repel insects. Things like lettuce, zucchini, carrots, even blueberries. Who doesn’t love blueberries? Unfortunately, these plants don’t contain glucosinolates, so we don’t know what chemicals they’re using to battle bugs, or whether these compounds are beneficial, neutral or harmful to our own species.

* Warning: it might also taste more cabbagey… remember what we discussed about glucosinolates and flavor.