After blasting through the U.S. Central Plains yesterday and during the night, severe weather is weakening this morning but expected to continue into today (June 4, 2014). The Storm Prediction Center is reporting a risk for more severe thunderstorms today:

Strong to severe storms are expected to develop primarily through the Ohio/Tennessee Valley region Wednesday with a threat for mainly damaging wind and large hail, though a tornado threat cannot be ruled out. Other more isolated strong to severe storms will be possible over western portions of the Plains states, from the Dakotas south to the Texas Panhandle.

Power outages have already occurred and continue to be possible across the region. It is important that everyone take all warnings seriously as this system is expected to continue to pack a punch over the next 24 hours. Follow the links below to learn more.

Know the difference between a watch and a warning. 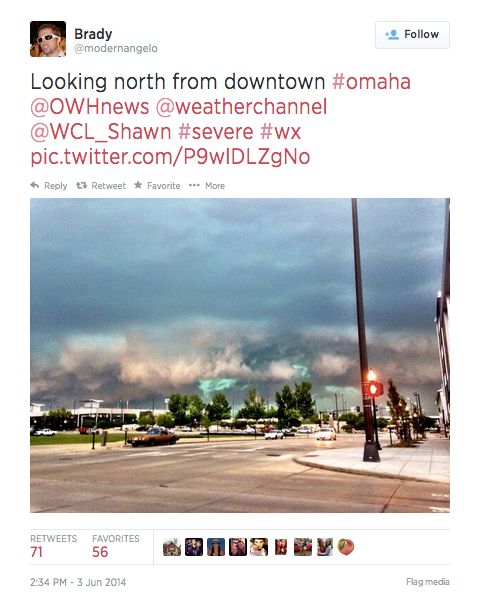 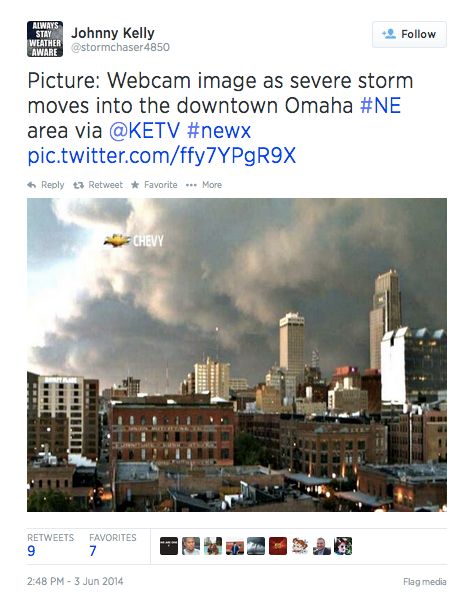 Was last night’s storm system a derecho? On the morning of June 4, Accuweather reported on the intense cluster of thunderstorms that had moved through the northern U.S. Central Plains yesterday and that continues today into the area from Missouri to Ohio, and down into Kentucky. They used the word derecho to describe this storm system. Early in the day on June 4, few were calling this system a derecho, and many meteorologists were scratching their heads over whether a derecho had in fact occurred.

Derechos – sometimes called inland hurricanes – bring with them severe thunderstorms with flooding downpours, damaging winds, large hail and isolated tornadoes. For a storm to be called a derecho, they have to meet the following criteria:

1) There must be a concentrated area of convectively induced wind damage/gusts greater than 50 knots, or 60 miles per hour. In the June 3-4 storm, there were wind reports of 60-80 mph and one report had a gust of 100 mph.

2) The area must have a major axis length of 400 kilometers, or 248.5 miles. One of us (Matt) used Google Earth and got the ole rule out to measure the distance from where the damage reports started and ended. He measured roughly 400 miles from northwest Nebraska to northwest Missouri. Reports became more scattered toward the southeast.

3) Wind reports should show a continuous and nonrandom pattern of occurrence. For instance, a swath of storms should consistently produce wind reports as the system moves to the east or southeast. The June 3-4 storm definitely pushed to the southeast, and there was definitely a swath of continuous damage.

4) In the storm reported areas, at least three reports, separated by 64 kilometers or more, should include wind gusts greater than 64 knots, or 74 mph. This is the hard parameter to determine for the June 3-4 storm. There were plenty of 60-70 mph gusts, but finding 80-100 is becoming more difficult. However, a 100 mph gust was reported in Nebraska, and then several 80 to 90 mph gusts were reported in Iowa. A lot of these reports are preliminary, so they will have to be looked into before anything is official. However, it appears as if the storms from late last night through this morning do fit this criteria.

5) Derechos are typically continuous and can sustain itself for hours. With that said, no more than three hours can elapse between successive wind damage events. The June 3-4 storms started off as large HP Supercells that eventually merged into bowing segments. These storms didn’t look like your traditional derecho on radar, though. Matt’s final word:

I’d wait to see if the SPC issues a graphic calling it a derecho or not. However, the reports and the overall look shows that it could very well be a derecho.

The following cities were in a moderate risk for severe weather yesterday:

The following cities were in a slight risk for severe weather yesterday:

Storms fired up early in the day on June 3 across parts of northern Nebraska. As an area of low pressure inched closer and a low level jet stream intensified, storms increased the afternoon and evening hours across Kansas, Nebraska, Iowa, and Missouri. Thge storms brought with them extremely large hail, damaging winds, and some reports of tornadoes. Thousands of electric customers in the Plains and Midwest lost power Tuesday night into Wednesday as a result of the storms. 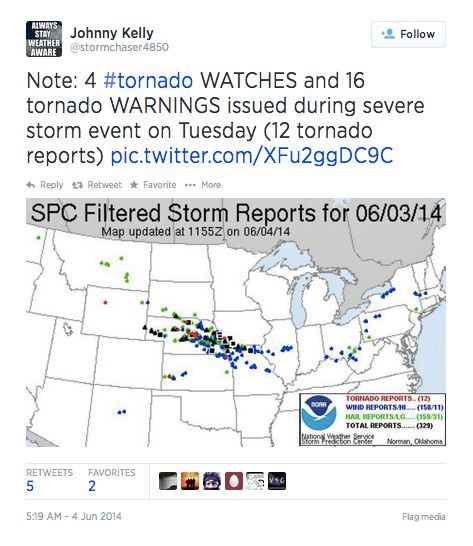 This stormchaser tweeted the number of tornado watches and warnings on Tuesday, June 3. A watch is a “maybe.” A warning is a “yes, take cover.”

In a way, it is like categorizing a watch as a “maybe” and a warning as a “yes.” In other words, a watch means conditions are favorable for severe weather. A watch means that you might see severe weather, but there is no immediate danger. If a warning is issued for your area, that means the National Weather Service has detected a severe storm approaching your area. A warning means you should take shelter as a storm is on the way.

So, if you are in a warning, then yes, a storm is going to hit you. If you are under a watch, then maybe the weather will get bad later in the day.

Bottom line: A severe weather outbreak is likely today (June 3, 2014) and Wednesday across the Central Plains and into the Midwest and Ohio River Valley. The threat consists of tornadoes, damaging winds, and large hail. Please take all warnings seriously as this system races to the east through Wednesday.