Largest threat with this first U.S. autumn cold front will be wind gusts exceeding 60 miles per hour with possible tornadoes as storms push through the region.

Severe weather is likely across portions of the central-eastern and northeastern United States on Saturday, September 8, 2012, thanks to a strong cold front that will push through the region later today. The Storm Prediction Center has issued a moderate risk for severe thunderstorms throughout portions of New England, elsewhere in the U.S. Northeast including just north of Washington D.C. The region includes major populated cities such as Philadelphia, New York and Baltimore. The largest threat with these storms will be wind gusts exceeding 60 miles per hour with a possibility of seeing a few embedded tornadoes as a squall line of storms pushes through the region. The storms are most likely to affect New England and the U.S. Northeast after noon EST today and continue into the evening hours. If you have any outdoor plans in this part of the country for this afternoon and evening, please be aware of the situation. Many people might have plans to attend baseball games, such as the Braves versus the Mets, or football games, such as the Southern California (USC) vs Syracuse matchup. Be weather aware today!

The first major cold front to push into the United States will remove some of the hot and muggy temperatures experienced throughout a large portion of the United States seen the past few weeks. It will usher in low humidity and much cooler temperatures throughout a large portion of the central and eastern United States. Unfortunately, this front is extremely strong and will also be associated with a strong area of low pressure that will trigger severe wind gusts and tornadoes. Some models indicate this area of low pressure strengthening down to 988 millibars, which is quite low. The lower the pressure, the stronger the storm.

Tornado probabilities for the eastern coast on September 8, 2012. Hatched area signifies 10% or greater probability of EF2 – EF5 tornadoes within 25 miles of a point. Image Credit: SPC

Wind threats across the eastern coast on September 8, 2012. Hatched area shows a 10% or greater probability of wind gusts 65 knots or greater within 25 miles of a point. Image Credit: SPC

The main source of this severe weather outbreak is a squall line that will form along the cold front and produce very strong winds over 60 mph. Within this cold front, we could see quick spin-up tornadoes as the line pushes eastward into New England. There are concerns that a few isolated storms could develop ahead of this line and become supercell thunderstorms. If this develops, the tornado threat will become greater. However, I think the cloud cover ahead of this system will likely limit the possibility for supercells to develop ahead of the front. Regardless, everyone should be weather ready this afternoon if you have any outdoor activities planned.

The image below shows a radar simulation from a short term weather model called the HRRR. It shows a line of strong storms pushing through central New York and eastern Pennsylvania around 4 p.m. EDT Saturday, September 8, 2012. This is just a model run, so this line of storms could develop slightly earlier or later depending on the timing of this system. 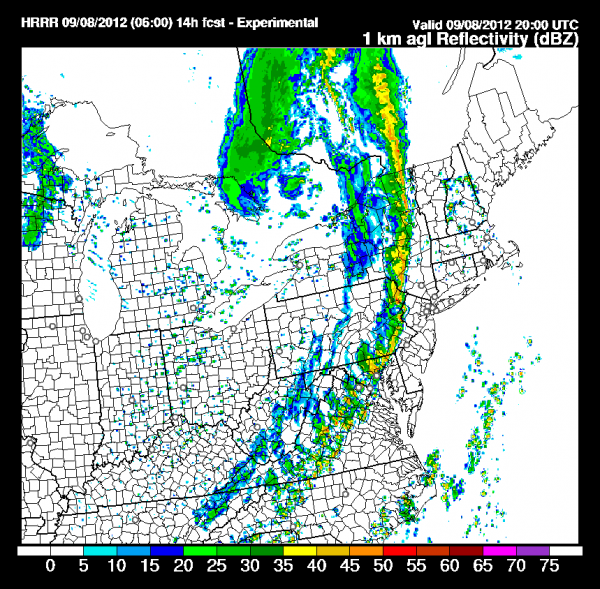 Bottom line: A severe weather outbreak is likely across New England and elsewhere in the U.S. Northeast, as a strong cold front pushes east into the region on Saturday, September 8, 2012. The storms are most likely to occur after noon EST today and continue into the evening hours. The biggest threat will be damaging winds that could gust over 60 or even 70 mph. Another area of concern will be the spin-up tornadoes associated with this main line of storms. Not only can tornadoes develop within the main line, but supercell storms could develop ahead of this cold front which could elevate the tornado risk. However, I believe cloud cover could inhibit any development for now. Everyone in the slight and moderate risk area should closely monitor the weather situation this afternoon and evening. There are major baseball and football games being played in this area today, so anyone planning on going to these games this afternoon should have a plan ready. Stay safe everyone!