Severe weather likely across the eastern U.S. Thursday and Friday

Severe weather is likely across portions of the U.S. Southeast and into the Midwest 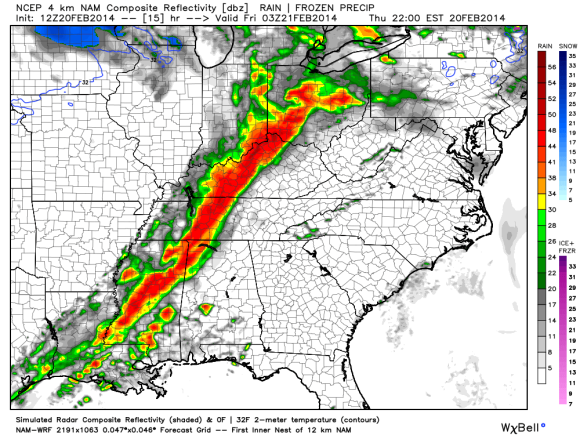 The NAM 4km model is showing what the radar could look like around 10 PM EST tonight (February 20, 2014). As you can see, a potent line of storms are expected to fire up. Image Credit: Weatherbell

A potent area of low pressure will intensify Thursday and Friday (February 20-21, 2014) to produce severe weather across the U.S. Southeast, Midwest, and eventually the East Coast. The area of low pressure will also be responsible for producing blizzard conditions across parts of southern Minnesota and into north/central Iowa. Many spots will see over six inches of snow with winds gusting as high as 60 miles per hour (mph). Ahead of the front, temperatures are extremely warm. With a potent cold front pushing into an area seeing temperatures 10-20 degrees above average, you can bet that severe weather will likely develop. The biggest threat for severe weather today will occur across Mississippi, Alabama, Louisiana, Tennessee, Kentucky, Indiana, Illinois, and Ohio. By Friday, the threat shifts to the U.S. East Coast.

The Storm Prediction Center has issued a moderate risk for severe thunderstorms for parts of northern Mississippi, west/central Tennessee, northwest Alabama, and extending northward into parts of west/central Kentucky. At least six million people are included in the moderate risk that include the cities of Memphis, Jackson, Nashville, and as far north as Louisville, Kentucky. Meanwhile, nearly 38 million people are included in the slight risk for severe weather on February 20, 2014. The biggest threat from this system will be straight line winds that could produce gusts over 60 mph. As the storm organizes and races to the east, a line of storms will develop and likely produce widespread damaging winds. Within the line, isolated tornadoes could develop. The timing of these storms will likely occur late this evening and into the overnight hours of Friday morning. If you live in this region, you will need to have a weather radio around so it can wake you up in case a warning has been issued for your area.

By Friday, the area of low pressure will push northward into the Great Lakes and deepen. As the cold front continues to push eastward, the threat for heavy rain, gusty winds, and perhaps an isolated tornado will continue across eastern Georgia, South Carolina, North Carolina, and into the Mid-Atlantic. By Saturday, this system will be out of here and conditions will be clearing up.

Bottom line: If you live in the slight or moderate risk areas for severe weather today or tomorrow, you need to monitor the situation and be prepared for damaging straight line winds and perhaps a few isolated tornadoes. If this is pushing in while you are sleeping, you need to find a way of having something (NOAA Weather Radio/Weather App) to wake you up in case your area is under a warning. This is the first “spring” storm of 2014. Of course, spring does not officially begin until March 20, 2014. With that in mind, the early active storm of today does not foreshadow what March, April, or May will bring in terms of severe weather across the United States. Only time will tell!