Severe weather a big story across the United States

November is a transitional month from fall to winter. Cold air across Canada pushing south results in severe weather and roller coaster temperatures.

A slow moving cold front stretched from the central United States into New England has provided severe thunderstorms and very active weather.  The front is a temperature barrier with very warm and muggy conditions south of the front and very cold, dry air to the north. Temperatures have warmed into the 70’s and even low 80’s across the southeast.  Dewpoints have also risen into the 60’s, which is making the air become saturated.  Temperatures are well above average, and would be typically seen in the middle of spring.  In this post, we will take a look at recent weather across the United States and finish up with what we can expect for the next few days as this cold front pushes into the eastern United States.

Here’s some fun weather facts from the past week: 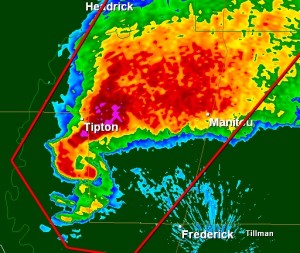 The NWS classified this storm as an EF-4 tornado that moved through Tipton, Oklahoma on November 7, 2011.

Last week, a severe weather outbreak occurred in Oklahoma and Texas on November 7, 2011.  One of the storms produced a strong tornado that hit near Tipton, Oklahoma, the same supercell I showed in my previous post last week.  National Weather Service upgraded this tornado to an EF-4 tornado with winds estimated around 180 miles per hour.  The tornado on that day was the first EF-4 tornado to hit the state of Oklahoma since record keeping began in 1950.

On November 14, 2011, two tornadoes caused damage across New York in Chautauqua county.  An EF-2 tornado with wind speeds around 110 mph hit parts of Fredonia, New York.  The tornado formed over Lake Erie and moved onshore.  The tornado track lasted for four miles, but the tornado did not stay on the ground the entire time. The tornado destroyed a barn and garage and snapped power poles and trees.  Fortunately, there were zero reports of injuries or deaths.

The second tornado that stuck New York state was in Westfield.  The tornado was classified as an EF-2 tornado with wind speeds around 110 mph. The tornado damaged a few homes and barns. Just as the tornado Fredonia, there were not any reports of injuries or deaths as this tornado was rather quick and did not last long.  Tornadoes in New York in the month of November is extremely rare, especially since these tornadoes were fairly strong.  YNN Meteorologist Vanessa Richards stated that the last time they had a tornado in the month of November was back in 1950.  There have been 17 confirmed tornadoes in western New York since 2000. 12 out of the 17 confirmed tornadoes occurred after July 2009. For full information regarding these two tornadoes, please visit the report from the National Weather Service.

The slow moving system currently over the United States (image above) has produced heavy rainfall as storms are “training” on one another. When storms “train”, it means showers and thunderstorms move over the same areas during a length of time.  When this occurs, heavy rainfall rates occur and can cause flash flooding. On November 15, 2011, a record daily maximum rainfall of 4.02 inches was set in Little Rock Adams Field, Arkansas.  It broke the record of 3.91 inches set back in 2006.  Here is an image from the Hydrometeorological Prediction Center showing possible rainfall amounts for the next two days:

Heavy rain over an inch is likely across northwest Georgia, Tennessee, North Carolina, Virginia, and the New England coast.

Warm air south of the cold front is not the only story worth noting.  Alaska is currently dealing with extremely cold temperatures for this time of year. Fairbanks, Alaska was experiencing temperatures around -35 Fahrenheit (-37 Celsius).  This is the kind of cold air that needs to be monitored because it has to travel somewhere.  Will it stay in Canada? Will it move south into the United States?  Great questions, and only time will tell. In my opinion, winter should return towards the end of November. Enjoy the warmth while you have it!

Temperatures across Alaska this morning on November 16, 2011. Image Credit: College of DuPage

Severe weather will continue to push east into portions of south/central Alabama, Georgia, South Carolina, and North Carolina today. The biggest threats will be strong winds, but isolated tornadoes are possible as daytime heating and higher instability creeps into these states this afternoon. There has already been reports of tornadoes across Louisiana, Mississippi, and Alabama overnight. Reports of damage in Laurel, Mississippi and Whitfield, Alabama have already occurred this morning.

Bottom line: It’s November! November is a huge transition month for the United States as we are trying to enter the winter months.  Severe weather is not unusual for this time of year as colder air tries to push further south.   The cold air around Alaska will likely push south, and parts of the western United States could see below average temperatures creep in as ole man winter makes his debut.  Should be an interesting winter across the United States!