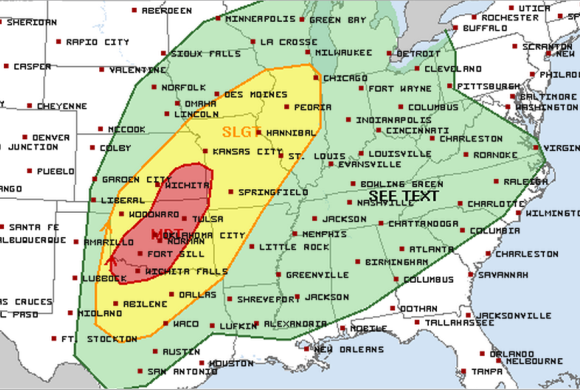 An unstable air mass across Oklahoma and southeast Kansas will likely result in numerous severe thunderstorms capable of producing large hail and a few strong tornadoes on the afternoon and evening of Wednesday, April 17, 2013. The Storm Prediction Center (SPC) has issued a moderate risk for severe thunderstorms that includes the cities of Wichita Falls, Norman, Tulsa, and Oklahoma City. Everyone in the slight and moderate risk areas should keep a close eye on the skies today, as severe weather looks likely later this afternoon and evening in the U.S. Plains. Nearly 36 million people are in the slight risk area for severe storms today. Meanwhile, approximately 4 million people are currently under the moderate risk highlighted by the SPC. 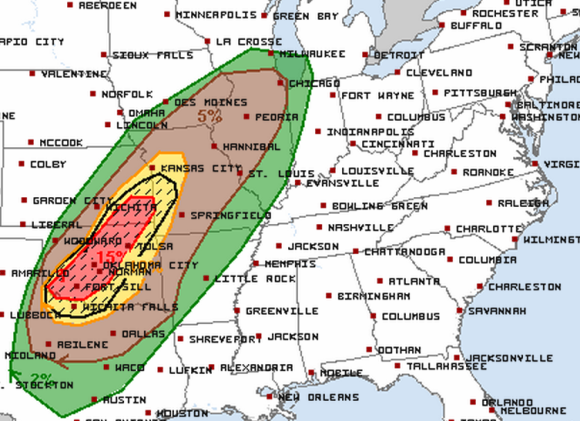 The tornado probability is fairly high, which is one of the main reasons the SPC has issued a moderate risk for central Oklahoma and southeast Kansas. The computer models have shown a substantial risk across the U.S. Central Plains for the past week, and the SPC originally issued this moderate risk two days ago in their Day 3 outlook. The new outlook (above) shows the probabilities of a tornado within 25 miles of a point. The hatched area signifies a 10% or greater probability of EF2 – EF5 tornadoes within 25 miles of a point. The red hatched indicates a 15% tornado probability, which is a large probability for tornadoes. Anyone in the hatched should be weather ready for the possibility of seeing strong and violent tornadoes. 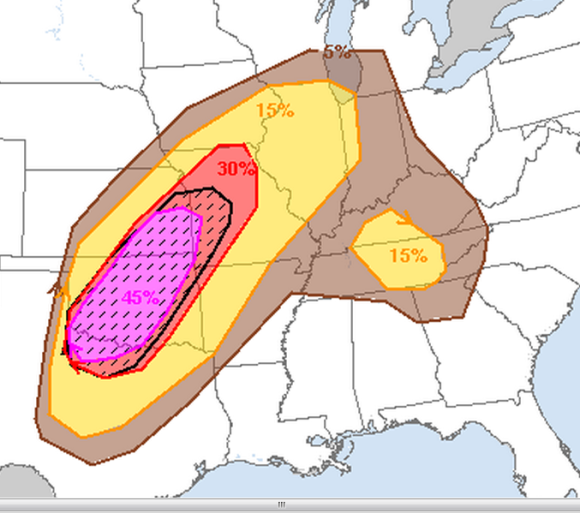 Supercells are very possible as the warm front tries to push to the north. If we see these discrete/individual storms develop along this boundary, then large hail could also be another issue in the Plains. The outlook above indicates the probabilities of seeing hail one inch in diameter or larger within 25 miles of a point. The hatched area indicates a 10% or greater probability of two inch diameter hail or larger within 25 miles of a point. In the stronger supercells that form this afternoon and evening, I would not be surprised if we see reports of baseball- or softball-sized hail in some areas. It is best to move your car into a protected area such as a garage or parking deck to avoid hail damage. 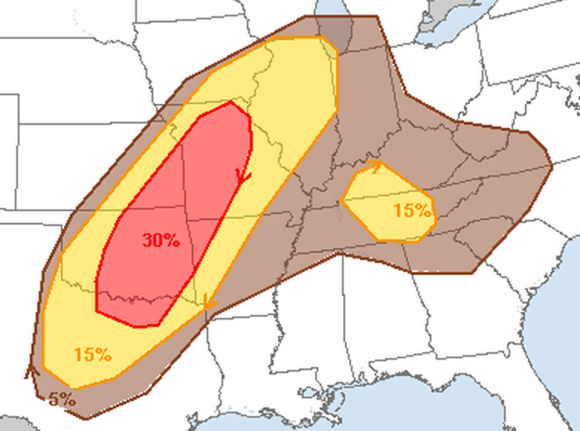 As the individual storms begin to merge together as a cold front pushes to the east, the severe threat will likely become linear in nature and produce strong winds over 60 miles per hour over a large area. The discrete storms can also produce damaging winds, but the main threat is large hail and tornadoes.

Heavy rain is also likely with this system across the central portions of the United States over the next 48 hours. Rainfall totals could easily add up to one to two inches across Lousiana and stretching as far north as parts of Quebec. Heavy rain and flash flooding are possible in southeast Kansas, Missouri, Iowa, Illinois, and Michigan as some areas could see over 3-4 inches of rain.

Here is a youtube video that was posted by the National Weather Service in Norman, Oklahoma which highlights the threats across central Oklahoma today. 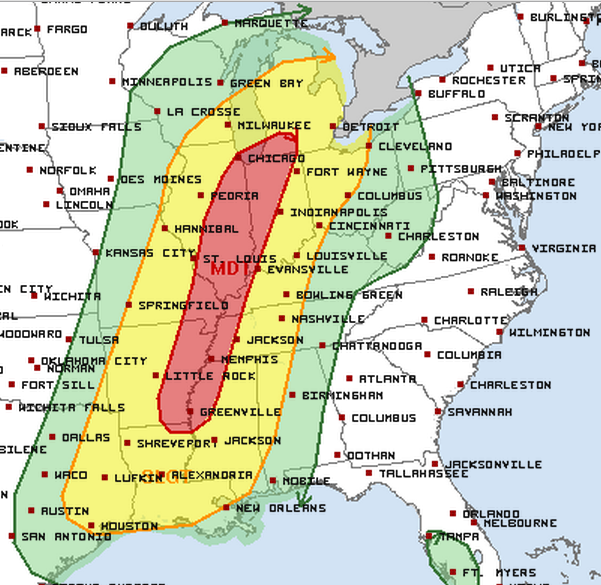 Also of note, the SPC has upgraded Thursday’s forecast (Day 2 outlook) to a moderate risk over an area of approximately 100,000 square miles with over 13 million people. The main threat will likely be wind as a massive squall line pushes eastward across the Mississippi River and into the eastern United States. States includes in the moderate risk are northern Louisiana, eastern Arkansas, northwestern Mississippi, western Tennessee, southeast Missouri, western Kentucky, Illinois, Indiana, and parts of southwestern Michigan. Tornadoes are possible within this line as it races to the east.

Bottom line: Severe weather looks likely Wednesday and into Thursday, April 17 and April 18, 2013. Hail and tornadoes appears to be the biggest threat for Wednesday, with damaging winds and isolated tornadoes likely Thursday. Everyone in the risk areas should be aware of this situation. Could be a nasty 48 hours for a large portion of the United States.