Severe storms struck in north and east Texas yesterday. At least 6 dead with over a hundred injuries in the town of Granbury. Mile-wide tornado north of Vista.

MAY 16, 2013 6 A.M. – A strong storm system pushed through parts of northern and eastern Texas yesterday (May 15), bringing strong winds and tornadoes across the region. The Dallas-Forth Worth area was the hardest hit region where numerous tornado warnings were issued by the National Weather Service. One of the hardest hit areas was in Hood County, where at least 6 people have died in the city of Granbury. One of the hardest hit areas in the city of Granbury was in the Rancho Brazos subdivision, which contains mostly Habitat for Humanity homes in the area. Over 100 people are injured, and nearly 14 others are currently missing. The death toll could continue to rise as the search and recovery truly begins once the sun rises today.

Tornado near Millsap, Texas on May 15, 2013, Image Credit: Chris McBee and Rachel Sager.

The video below shows a tornado near Millsap, Texas on May 15, 2013, filmed by storm chasers Chris McBee and Rachel Sager.

The next video was shot in Granbury, Texas by Mark Zimmermann. 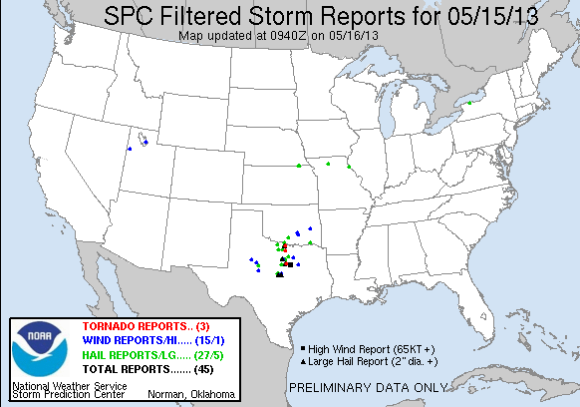 It is very possible that other tornadoes struck parts of Tarrant, Dallas, and Parker counties on the evening of Wednesday, May 15, 2013. Wind damage was also reported in the city of Ennis, Texas. At this time (May 16, 6 a.m.), it is unclear whether or not the damage reported in Ennis was due to straight line winds or a possible tornado. The National Weather Service will head out with three teams to the hardest hit areas today to determine whether or not tornadoes or straight line winds were to blame. The damage in Granbury was likely the worse of the damage as many buildings across the city were reported destroyed. At least one tornado was reported to be nearly one mile wide as it and other tornadoes swept through parts of northeastern Texas Wednesday evening. 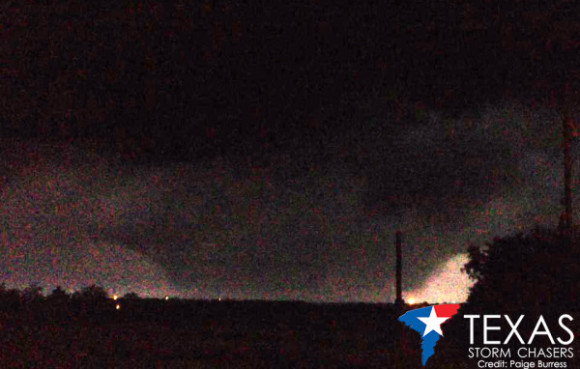 Mile-wide tornado north of Rio Vista, Texas on May 15, 2013. Image via Paige Burress

Bottom line: Severe storms pushed through the Southern Plains and struck parts of north and eastern Texas on Wednesday, May 15, 2013. One of the hardest hit areas was in the city of Granbury in Hood County where at least 6 people died with over a hundred injuries reported. It is possible that the death count could climb later today as recovery efforts began once sunlight shows the widespread damage in the area. Many people will be without their homes. Red Cross and other volunteers are helping out the heavily damaged areas and are providing food and shelter for those who lost their homes Wednesday evening. We will provide more updates as they come available. Prayers go out to all of the victims in these deadly storms that occurred on May 15, 2013.