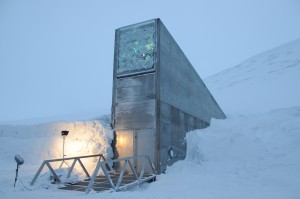 View larger. | The Svalbard Global Seed Vault officially opened on February 26, 2008. The roof and vault entrance are filled with highly reflective stainless steel, mirrors, and prisms, designed to reflect polar light in the summer months, making the seed vault visible from a distance. < href='https://www.regjeringen.no/en/aktuelt/arctic-seed-vault-opens-doors-for-100-mi/id501721/' target=_blank>Image via Norway’s Ministry of Agriculture and Food

Thank you! Your submission has been received!
Oops! Something went wrong while submitting the form.
END_OF_DOCUMENT_TOKEN_TO_BE_REPLACED