This image shows the body size for 25 marine species, including whales, sharks, squids, and other ocean giants. Check out the little human swimmer in each row! 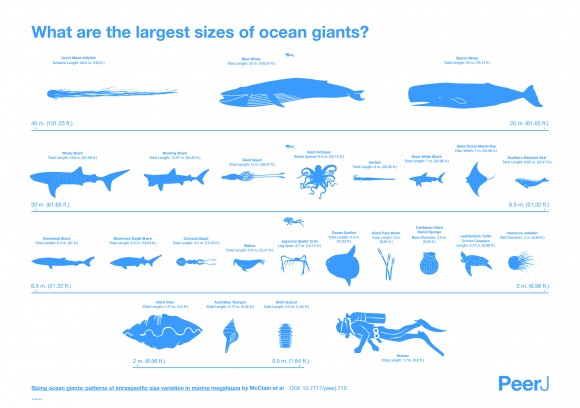 View larger. | Researchers analyzed sizes for storied sea creatures like whales and sharks and for lesser-known giants like tube worms. Image via Matthew Maxwell and Pablo Alvarez Vinagre at StudioAM

A team of scientists and undergraduate students analyzed the body size for 25 marine species, including whales, sharks, squids, and other ocean giants.

Craig McClain, the assistant director of the National Evolutionary Synthesis Center in Durham, N.C., is the primary author of the research paper, published January 13, 2015 to PeerJ. McClain said:

Several years ago I noticed that people kept staying that giant squids reached 60 feet in length, which is amazingly long. When I started actually looking at the data, I found that that estimate was actually quite unrealistic.

McClain explained that the muscle fibers in squids loosen and stretch during decomposition, which could account for the measurement of specimens found ashore in the 1800s. This new research indicates that the longest scientifically verified length is estimated at 12 meters (nearly 40 feet).

To cast a wider net, he invited graduate and undergraduate students to join the project and select the marine species that most fascinated them.

The species range from well-known behemoths like the Great White Shark, Giant Octopus, and walrus to more obscure creatures such as the Giant Tubes Worm and the Colossal Squid. McClain said:

Precise, accurate, and quantified measurements matter at both a philosophical and pragmatic level. Saying something is approximately ‘this big,’ while holding your arms out won’t cut it, nor will inflating how large some of these animals are.

The authors considered environmental factors that could give rise to bigger species, as well as situations in which a larger size would be beneficial. For example, the Giant Clam can reach lengths of 1.37 meters (4.5 feet) because it receives additional nourishment from symbiotic photosynthetic bacteria. Similarly, larger Whale Sharks and Blue Whales are less susceptible to starvation: If a habitat is depleted of food, these filter-feeders have the mass to support a migration and subsequent fasting to reach more plankton-rich waters. McClain said:

Metabolism is a function of size because it indicates how much oxygen and carbon an animal consumes. Knowing whether a whale shark is 10 tons, 15 tons, or 20 tons lets us know how many light bulbs worth of energy it uses every day.

Bottom line: A new image shows the body size for 25 marine species, including whales, sharks, squids, and other ocean giants – compared to a human swimmer. The research in the comparative body size of these giant ocean creatures was published January 13, 2015 to PeerJ.