Seagulls on an iceberg

A group of ivory gulls – a threatened species of seagull – has made a colony in an unusual place: On an iceberg.

This article is republished with permission from GlacierHub. This post was written by Syed Sayeed.

Researchers recently reported that a threatened species of Arctic seagull had made a colony in an unusual place— on an offshore iceberg. This is the first report of these gulls breeding on an iceberg.

They reported in a short note published April 26, 2016 in the journal Polar Biology that ivory gulls, Pagophila eburnea, had formed a breeding colony of around 60 adults with numerous chicks and fledglings among them. The gulls, which are named for their all-white plumage, may have made their home there because it allows them to avoid predators (including the Arctic fox, wolf, and polar bear) and because it is close to an area of open water that is a rich source of food. The find represents a new place to look during counts of such birds. 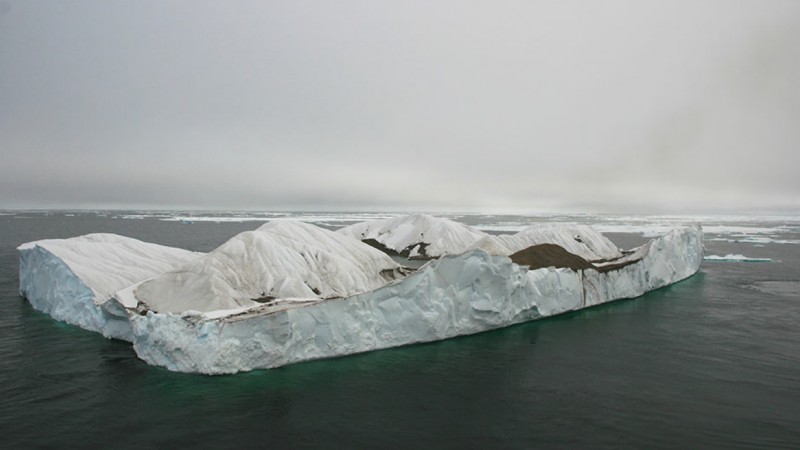 The iceberg where the gulls were breeding. Image via Polar Biology.

The iceberg was covered with gravel and debris, and after analysis, the researchers reported that the likely source was a glacier moraine in Greenland. The iceberg was located nearby the North East Water polynya in Northeast Greenland. (A polynya is an area of open water where sea ice would normally be found. These zones open up seasonally, and are rich in foods that the gulls and other predators can consume, including small fish and krill.) The distance from feeding zones to nesting areas can be up to 100 km each way, so having the iceberg near the feeding area saves energy for the parents.

The colony was spotted serendipitously while the researchers were taking observations from the deck of the RV Polarstern on August 9, 2014. The scientists were looking for seabirds and marine mammals as part of a long-term study of the relationship between predator densities and environmental factors in the polar region. 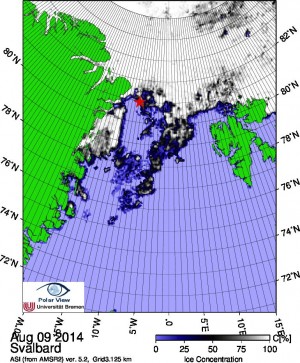 The location of the ship and the extent of the sea ice when the birds were seen. Image via Polar Biology.

Ivory gulls typically breed on nunataks, which are areas of exposed rock from mountain ice and snow fields, or on remote coastal islands. It had been suspected that the gulls might breed on offshore ice islands. A few studies also document the birds breeding on gravel-covered sea ice, though these were near the shore.

The iceberg that was home to the colony was 43.5 miles (70 km) offshore. The researchers state that they assumed the iceberg was grounded, rather than freefloating, based on the typical depth of East Greenland icebergs.

The observation of these gulls is also interesting because they are a near-threatened species, according to the IUCN Red List. While the ivory gull was among the most frequently seen gull in the Arctic in the 1990s, it is not even among the top ten any more, according to the researchers. The estimated total number of individuals of this species in the Greenland sea has also fallen, according to observations by the authors. The global population of these gulls is now estimated at between 19,000 and 27,000, they noted. The number of gulls seen in this colony makes it an average sized colony for this species. The authors weren’t able to provide an estimate of the number of young gulls, because they blend into the gravel so well and because the authors weren’t able to observe all parts of the breeding site closely.

Juveniles of different age (from chicks in downy plumage to fledglings) were observed, but not quantified because parts of the breeding site could not be sighted properly at close range and due to their excellent camouflage on the gravel. 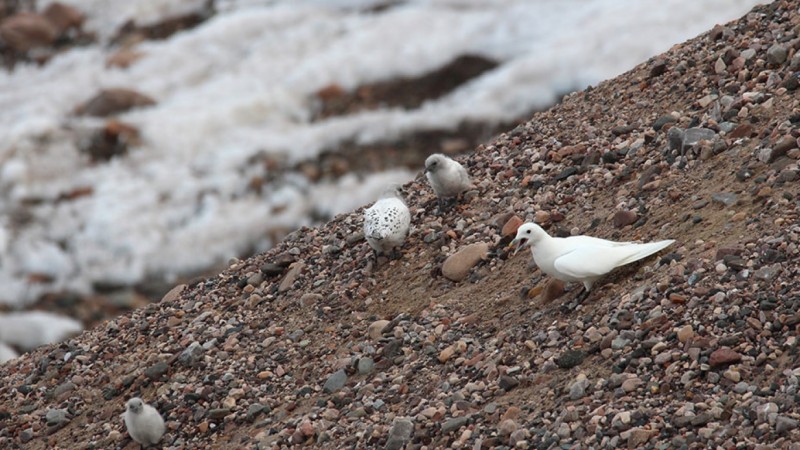 An adult gull and fledglings on the iceberg. Image via Polar Biology.

The ivory gull does not venture far from the Arctic Ocean, according to the Cornell Laboratory of Ornithology, and the iceberg was located in the Greenland Sea, which is nearby. Earlier this year, an ivory gull was spotted in Duluth, Minnesota which, though close to the border between the US and Canada, is still far from its normal range. The appearance of the gull attracted bird enthusiasts from all over the country who saw it as a once-in-a-lifetime opportunity to add a species to their life lists.

As climate change has resulted in more icebergs calving off Greenland, it will be interesting to see whether birds like the ivory gull will be able to use them as breeding sites, or if other colonies of ivory gulls are found on icebergs in the future.