Despite climate change, sea ice will continue to make the Northwest Passage too treacherous to be a regular Arctic shipping route for decades, says study.

New research from York University predicts that it will be decades before the Northwest Passage will be a viable route for regular commercial shipping. Despite climate change, Arctic sea ice remains too thick and treacherous, says the study, published in the journal Geophysical Research Letters on September 25, 2015.

The Northwest Passage is a sea route that connects the Atlantic and Pacific Oceans through the Canadian Arctic Archipelago.

In the past, the Northwest Passage has been virtually impassable because it was covered by thick, year-round sea ice.

Northwest passage, circa 1853. H.M.S. Intrepid is trapped in pack ice in Baffin Bay. This mission set out to find an earlier 1845 expedition, which had disappeared during a search for the Northwest Passage. From a sketch by Commander May R.N. Image via Hulton Archive/Getty Images

For commercial shipping, the potential benefits of a clear Northwest Passage are significant. The Northwest Passage is a much shorter route for moving goods between the Pacific and Atlantic regions than the Panama and Suez Canals. Ship routes from Europe to eastern Asia would be 4,000 kilometers (2,500 miles) shorter. Alaskan oil could move quickly by ship to ports in the eastern United States. The vast mineral resources of the Canadian North will be much easier and economical to develop and ship to market.

In the past few years, as the climate has warmed, it’s been speculated that shrinking Arctic sea ice coverage might open the passage for increasing periods of time, to allow regular commercial traffic to pass through the Arctic Ocean via this once impossible route. At the moment, this year’s annual summer minimum Arctic-wide ice coverage is the fourth lowest on record, with similar low coverage in the Northwest Passage, according to information provided by the Canadian Ice Service.

But the York University researchers say the ice is still too thick for a regular commercial passage to be viable. Next to ice coverage and type, the researchers said, sea ice thickness plays the most important role in assessing shipping hazards and predicting ice break-up.

While everyone only looks at ice extent or area, because it is so easy to do with satellites, we study ice thickness, which is important to assess overall changes of ice volume, and helps to understand why and where the ice is most vulnerable to summer melt.

The surveys found a mean thickness of between two and three meters (6.5 to 10 feet) in most regions of the Northwest Passage. Ice originating from the Arctic Ocean showed a mean thickness of more than three meters on average. Some multiyear ice regions contained much thicker, deformed ice that was more than 100 meters (109 yards) wide and more than four meters (13 feet) thick. Haas said:

This is the first-ever such survey in the Northwest Passage, and we were surprised to find this much thick ice in the region in late winter, despite the fact that there is more and more open water in recent years during late summer.

Although the results were obtained in late winter when no ships travel the route, they will help predict how ice break-up and summer ice conditions develop, the researchers say;, and help forecast the opening and navigability of the Northwest Passage during summer. It might also affect how sea ice hazards are assessed during the shipping season and provide baseline data going forward.

How climate change will affect the summer ice in the Northwest Passage in the future is difficult to predict, says Haas. Further melting could cause more multiyear ice from the Arctic Ocean to drift into the passage, making it less, not more passable. 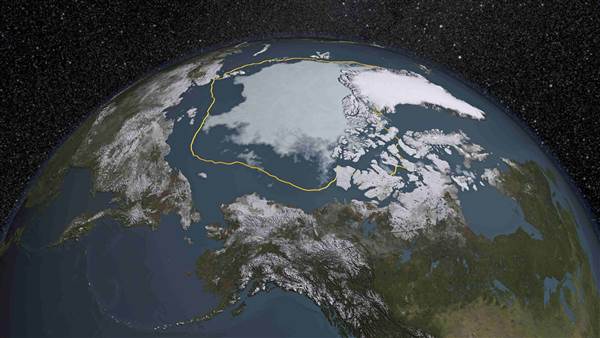 In 2015, the Arctic sea ice summertime minimum is 699,000 square miles below the 1981-2010 average, shown here as a gold line in this visual representation of a NASA analysis of satellite data released September 14, 2015. Image via NASA. The 2015 minimum was the fourth-lowest on record.

Bottom line: New research published in the journal Geophysical Research Letters on September 25, 2015 predicts that it will be decades before the Northwest Passage will be a viable route for regular commercial shipping. Despite climate change, Arctic sea ice remains too thick and treacherous, says the study.