A research team recorded the sound of methane bubbles seeping from the seafloor off the Oregon coast, with the aim of using acoustics to identify – and perhaps measure – this important greenhouse gas in the ocean. 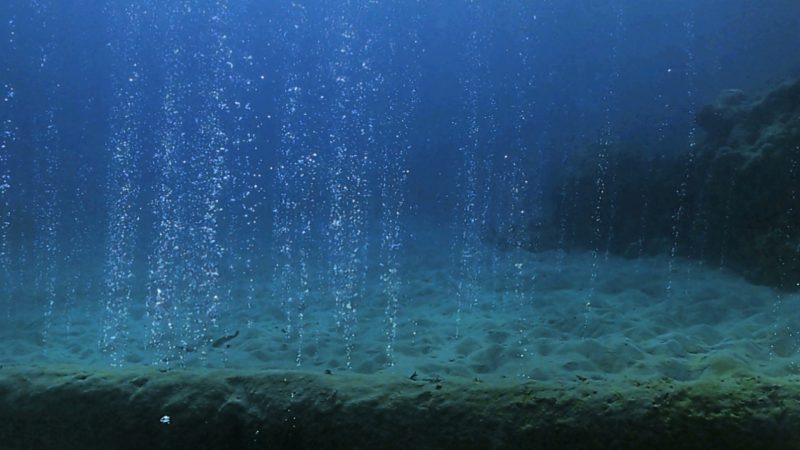 Image via the Seattle Times.

A research team used a hydrophone – a microphone designed to listen underwater – to record the sound of methane bubbles from the seafloor off the Oregon coast. Their aim was to use acoustics to identify this important greenhouse gas in the ocean.

Methane is the main constituent of natural gas. Natural methane is found both below ground and under the sea floor. When methane reaches the surface and atmosphere, it becomes a powerful heat-trapping gas. The Earth’s atmospheric methane concentration has increased by about 150 percent since 1750, and it accounts for 20 percent of the total global greenhouse gases.

The next step, the researchers say, is to fine-tune their ability to detect the acoustic signature of the bubbles so they can use the sounds to estimate the volume of methane in the offshore reservoirs. It potentially could be a new energy source, or it could pose a serious environmental threat as a greenhouse gas.

Results of the study have just been released. Robert Dziak, an acoustics scientist at NOAA, is lead author of the study, published in the journal Deep-Sea Research II in April 2018. Dziak said in a statement:

Our ultimate goal is to use sound to estimate the volume and rate of methane gas exiting these seafloor fields. 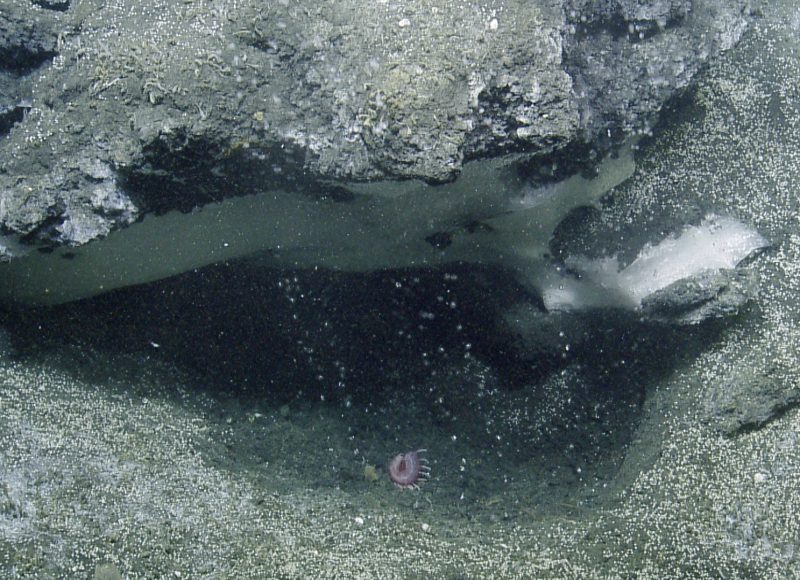 Methane seep. Image via OET/NautilusLive and NOAA Office of Ocean Exploration and Research.

In recent years, scientists have found hundreds of bubble streams emanating from methane deposits off the Pacific Northwest coast, but they have no way to determine how much methane is stored there.

So what’s the source of all this methane that’s bubbling up out of the seafloor and into the Pacific Ocean waters? Tamara Baumberger, a researcher with the Cooperative Institute for Marine Resources Studies, has sampled some of the bubbles from the site and found different chemical signatures that helped the researchers pinpoint the origin of the methane. Some of it was “thermogenic” – the result of organic material like dead plankton being heated up and transformed into the gas. Some was “biogenic,” in which the organic material was altered by microbial activity. Baumberger said in a statement:

When methane is in seawater, it often is oxidized into carbon dioxide by microbial activity, which can keep much of it from reaching the atmosphere. The downside, of course, is that the newly formed CO2 is also a problem and it can both reach the atmosphere and increase ocean acidification.

A statement from Oregon State University described the study:

The research team used a remotely operated vehicle (ROV) to deploy a hydrophone about 10 kilometers [six miles] off Heceta Bank on the Oregon continental margin in 1,228 meters of water (about three-fourths of a mile deep). The acoustic signatures of the bubbles from the seep site are depicted in the hydrophone record as a series of short, high-frequency bursts, lasting 2-3 seconds. The researchers then compared the sound record with still images from the ROV and found their estimates of bubble size from the hydrophone record matched the visual evidence.

Bottom line: Scientists recorded the sound of methane bubbles seeping from the ocean floor off the Oregon coast.