“Our discovery enables us to make a journey through time and to revisit these ancient reptiles using their own biomolecules.” – Per Uvdal, research team member.

For the first time, scientists have direct evidence of skin color in marine creatures that lived many millions of years ago. Their findings, published in the journal Nature on January 8, 2014, describe pigment found in the fossilized skin of a 196-million-year-old ichthyosaur, an 85-million-year-old mosasaur, and a 55-million-year-old leatherback turtle. The evidence suggests that some ancient sea creatures had dark skin, which might have provided UV protection, helped regulate body temperature, and perhaps served as camouflage.

Johan Lindgren at Lund University in Sweden heads the international team that made the discovery. In a recent press release announcing their results, he and other scientists sounded as if they could barely contain their excitement. Lindgren said:

This is fantastic! When I started studying at Lund University in 1993, the film Jurassic Park had just been released, and that was one of the main reasons why I got interested in biology and paleontology. Then, 20 years ago, it was unthinkable that we would ever find biological remains from animals that have been extinct for many millions of years, but now we are there and I am proud to be a part of it.

Per Uvdal, a member of the research team at MAX IV Laboratory in Sweden, said:

Our results really are amazing … Our discovery enables us to make a journey through time and to revisit these ancient reptiles using their own biomolecules. Now, we can finally use sophisticated molecular and imaging techniques to learn what these animals looked like and how they lived. 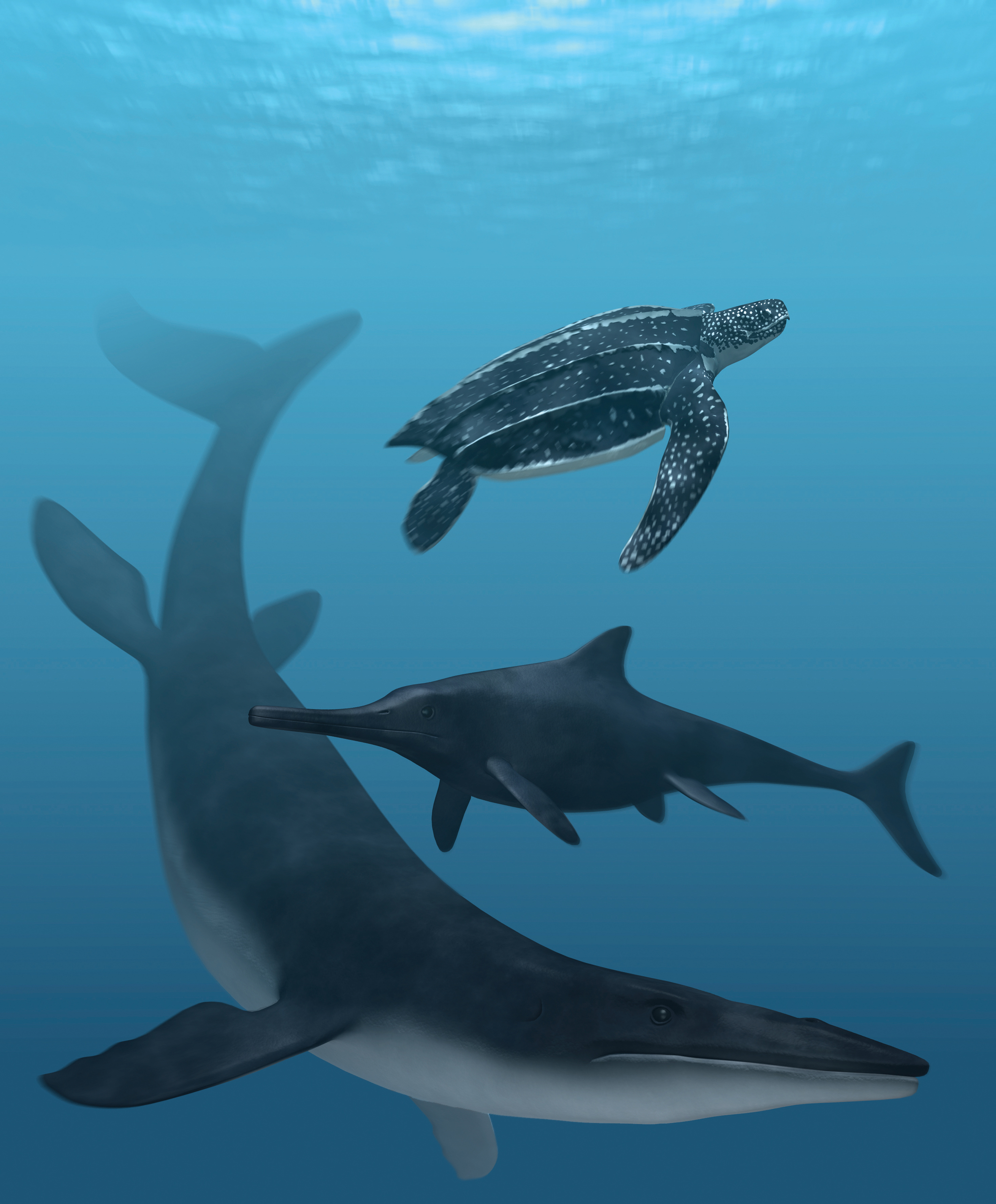 An artist’s depiction of what the fossil reptiles studied by Lindgren’s team might have looked like in life. The preserved skin pigment studied by the team indicates they had some amount of dark coloring. Illustration by Stefan Sølberg.

Ichthyosaurs, marine reptiles with a dolphin-like body, lived between 245 to 90 million years ago. Paleontologists believe that these extinct ocean predators fed on fish, shellfish, cephalopods, and perhaps smaller marine reptiles. Mosasaurs were giant marine lizards, likely the apex predators of their day, that thrived during the late Cretaceous, about 85 to 65 million years ago. The scientists also studied leatherback turtles, whose ancestry dates back to the first sea turtles that emerged 110 million years ago. Leatherbacks are still on Earth today, found in tropical and temperate waters of the Atlantic, Pacific and Indian Oceans.

In the fossils of each animal, scientists found dark patches of fossil skin that bore many micron-sized flat roundish features (one micron is about 0.000039 inches). Previously, these features were thought to be fossilized bacteria in the decomposing carcass. However, further analysis by the research team revealed it to be fossilized melanosomes, specialized structures in animal cells that make, store, and transport the pigment that determines skin color, melanin.

The modern leatherback turtle (Dermochelys coriacea) has a black-colored back. It’s one of several adaptations for survival in temperate waters since dark colors do not reflect much light, but instead absorb light and convert it to heat. This helps the turtle stay warm as it floats the ocean surface, basking in the sun. Lindgren commented:

The fossil leatherback turtle probably had a similar color scheme and lifestyle as does Dermochelys. Similarly, mosasaurs and ichthyosaurs, which also had worldwide distributions, may have used their darkly colored skin to heat up quickly between dives.

In his press release, Lindgren speculates that some ichthyosaurus species may have had a similar way of life as modern-day sperm whales. If so, they may have also evolved similar dark colors of sperm whales, adaptations for camouflage during dives to the dark deep ocean depths, and for UV protection at the ocean surface.

Bottom line: Scientists have discovered pigment in the fossilized skin of a 196-million-year-old ichthyosaur, an 85-million-year-old mosasaur, and a 55-million-year-old leatherback turtle. It’s the first direct evidence of skin color for these ancient sea creatures. Dark-colored skin might have provided UV protection, helped regulate body temperature, and perhaps served as camouflage. The journal Nature reported on these discoveries on January 8, 2014.