Scientists led by Scripps Institution of Oceanography found forests might be taking up more atmospheric CO2 during photosynthesis than previously thought.

A team of scientists led by the Scripps Institution of Oceanography has discovered that forests might be taking up more atmospheric CO2 during photosynthesis than previously thought. Their work was published on September 29, 2011 in the journal Nature.

Atmospheric CO2 levels are at 390 parts per million and climbing. A large portion of the CO2 that gets emitted into the atmosphere is absorbed by vegetation. Plants and trees convert CO2 into plant material during the process of photosynthesis. This is an important mechanism that helps to mitigate climate warming caused by rising CO2 levels in the atmosphere.

Estimating the global uptake of CO2 by forests is no easy task.

Lisa Welp, lead author and postdoctoral scholar at the Scripps Institution of Oceanography in La Jolla, California stated in a press release:

It’s really hard to measure rates of photosynthesis for forests, let alone the entire globe. For a single leaf it’s not so hard, you just put it in an instrument chamber and measure the CO2 decreasing in the chamber air. But you can’t do that for an entire forest. What we have done is to use a naturally occurring marker in atmospheric CO2 that let us track how often it ended up inside a plant leaf, and from that we estimated the mean global rate of photosynthesis over the last few decades.

Specifically, the scientists measured changes in oxygen isotopes within CO2 molecules over a period of 30 years. The oxygen isotopes provide a signature that indicates how long the CO2 has been stored in plant material. From their data, they were able to calculate that Earth’s vegetation sequesters up to 150 to 175 petagrams of carbon per year. That’s equivalent to 175,000,000,000,000 kilograms of carbon!

Previous measures of global photosynthetic activity – also referred to as Gross Primary Productivity – are around 110 to 123 petagrams of carbon per year. These estimates of plant carbon uptake were derived by the use of different methods such as through remote sensing technology.

It speaks to the question, how alive is the Earth? We answer that it is a little more alive than previously believed.

In science, it’s not uncommon for different methods to yield different numbers even though both methods were measuring the same phenomenon. Overall, the use of a combination of conventional methods and novel techniques can improve the accuracy of data and enhance our understanding of the world.

In the future, understanding how primary productivity is spatially distributed throughout the Earth will be key to protecting critical ecosystems that act as carbon sinks and help to mitigate climate change. 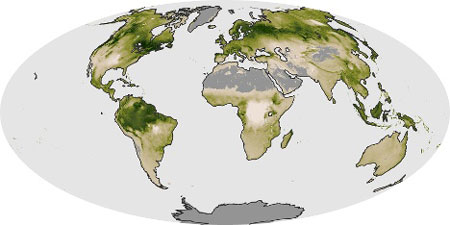 Other co-authors of the paper on photosynthesis that was published in Nature include Harro Meijer from the University of Groningen in the Netherlands; Alane Bollenbacher, Stephen Piper and Martin Wahlen from Scripps Institution of Oceanography; Kei Yoshimura from the University of Tokyo in Japan; and Roger Francey and Colin Allison from CSIRO Marine and Atmospheric Research in Australia. Matthias Cuntz from the Helmholtz Centre for Environmental Research has also published an informative commentary on the findings.

Bottom line: A team of scientists led by the Scripps Institution of Oceanography has discovered that forests might be taking up more atmospheric CO2 during photosynthesis than previously thought.

Daniel Sigman on ocean algae and global cooling of the past