The powerful windstorm across northern Europe on Monday was one of the worst storms to hit the region in years.

At least 13 people have died due to a powerful windstorm that ripped through parts of Europe Monday (October 28, 2013). A deep and unusually strong area of low pressure pushed through northern Europe and affected a wide area including the United Kingdom, France, Belgium, the Netherlands, and Germany. The storm deepened as it pushed to the northeast, bringing widespread damaging winds of 60 to 70 miles per hour (mph) with wind gusts as high as 90 to 100 mph at higher elevations. The savage winds resulted in storm reports of downed trees, damage to buildings, and power outages. 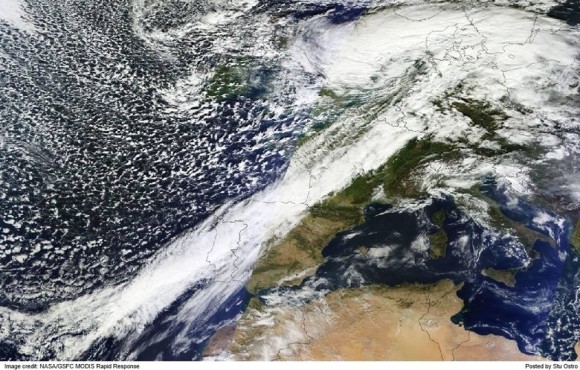 Winds gusted to 99 mph at the Isle of Wight with gusts greater than 74 mph in areas such as Hampshire, Somerset, and Dorset. The strong winds disrupted flights across the area leaving many flights delayed or canceled. The strong winds brought numerous trees down crashing on vehicles and blocking roads.

According to the Washington Post, at least 13 people died from this storm. Germany had six deaths, Britain had five and the Netherlands and Denmark had one each. A British teen died after being swept away into the ocean due to dangerous rip currents.

Reuters is reporting that a gas explosion occurred in London that killed two people. It was thought that a tree fell on a gas line that eventually sparked the explosion.

The UK Met Office did a great job warning the public about the storm as it accelerated to the northeast.

A very intense low pressure system is forecast to run northeastwards across England and Wales early on Monday, bringing the potential for an exceptionally windy spell for southern parts of the UK. At the same time, persistent, heavy rain could cause some surface water flooding, while the winds will lead to some very large waves around our coasts. 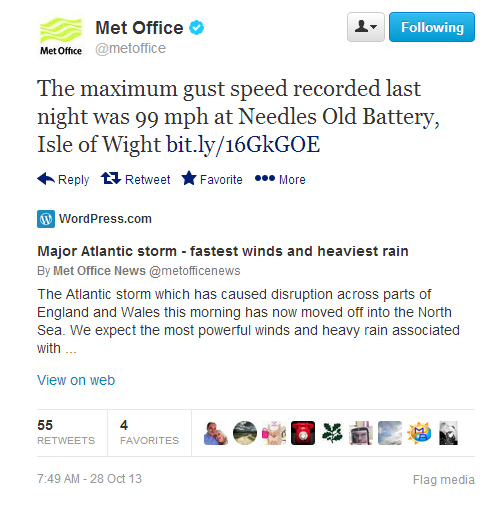 The UK Met Office constantly used twitter to report wind gusts from the storm as it was happening. 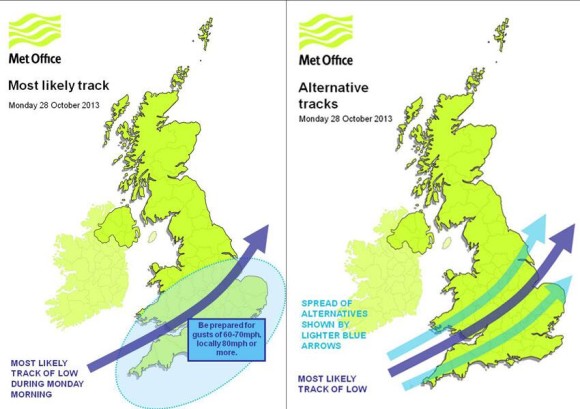 The UK Met Office created this graphic showing where the area of low pressure would push through the country.

The weather models also did a great job days in advance showing a significant area of low pressure pretty far south and affecting portions of Northern Europe with extreme winds. The lines in the map indicate isobars, or lines of equal pressure. The closer these lines are to one another, the stronger the winds. All of the models were indicating pressure values typically seen in hurricanes with values lower than 985 millibars. The lower the pressure, the stronger the storm. 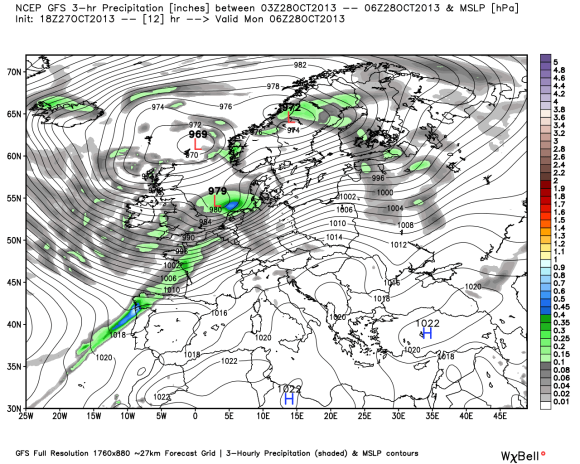 So the predictions in advance about this storm were great. And when the storm roared through, causing its damage and even taking lives, we trust that lives were saved due to the high quality of the predictions.

The videos below are just two of the many that came from this savage European storm. The first one, from Wolfgang Schwarz, shows a truck being blown over in high winds. Wolfgang said he stopped to help the driver, who had only a laceration on his head.

The second video, below, presents photos from Amsterdam of effects from the October 28 windstorm. Bottom line: A massive windstorm associated with a very strong area of low pressure produced damaging winds across northern Europe early on Monday, October 28, 2013. At least 13 people have died from this storm as winds knocked down trees, produced rough surf along the coasts, and sent debris flying in the air. Winds gusted to nearly 100 mph at some points as the storm quickly pushed off to the northeast.