Posted by Eleanor Imster and Deborah Byrd in Earth | Today's Image | May 9, 2018

Kilauea is one of the world’s most active volcanoes. Here are images and video from its ongoing eruption in Hawaii. 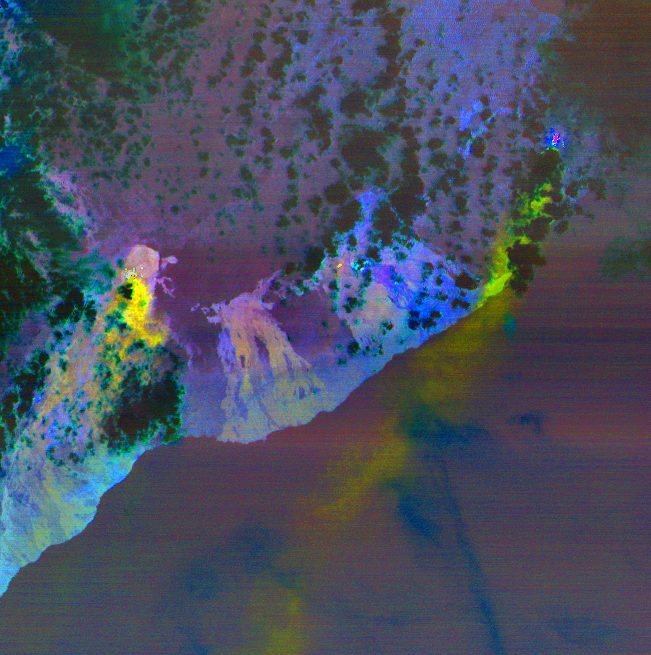 NASA’s Terra satellite acquired this image on May 6, 2018. Massive sulfur dioxide plumes from Kilauea volcano are shown here in yellow and green. A smaller, but thicker, sulfur dioxide gas plume can be seen coming from Kilauea. The prevailing trade winds blow the plumes to the southwest, out over the ocean. Image via NASA/METI/AIST/Japan Space Systems/Japan ASTER Science Team.

UPDATE May 12, 2018 from the Hawaiian Volcano Observatory/ USGS: Volcanic unrest in the lower East Rift Zone of K?lauea Volcano continues. While no lava has been emitted from any of the 15 fissure vents since May 9, earthquake activity, ground deformation, and continuing high emission rates of sulphur dioxide indicate additional outbreaks of lava are likely. The location of future outbreaks is not known with certainty, but could include areas both uprift (southwest) and downrift (northeast) of the existing fissures, or resumption of activity at existing fissures. Communities downslope of these fissures could be at risk from lava inundation.

Lava and sulfur dioxide gas are continuing to spew from Kilauea volcano on Hawaii’s Big Island, where flows of lava across a rural neighborhood have caused evacuations. By late Tuesday (May 8, 2018), some 104 acres were covered by lava. Hawaii Civil Defense said that 35 structures — including at least 26 homes — had been destroyed.

A total of 12 volcanic fissures had formed as of late Tuesday. Residents were voicing frustration and anxiety against a backdrop of flowing lava and hazardous fumes.

May 4, 2018 Third Leilani Eruption from Mick Kalber on Vimeo.

Videographer Mick Kalber was on the ground in Leilani Estates on May 5, where he told captured the dramatic video above and told this story:

This is a killer video! And may be one of the last ground level shots I’ll be able to get before I have to evacuate … After all the lava drained out of the Pu’u ‘O’o Vent (the main vent of the 35 year long current eruption) last Monday [April 30, 2018], the contents moved down the East rift zone, causing hundreds of earthquakes as far away as Kapoho, some 15 miles downslope. All week, a new eruption had been forecast … cracks appeared on roadways, as the Earth began to swell. And then, on Thursday afternoon [May 3, 2018], Pele (the Volcano Goddess) made her appearance in the lower part of Leilani Estates Subdivision. At first, fountains of lava shot up into the air … but within a few hours, she had settled down into a lava flow that now threatens dozens of nearby homes, and a geothermal power plant just a quarter mile downslope. That flow has now stopped… but several more continue to pop out nearby. I live in the subdivision, and we are continually experiencing rolling earthquakes … it ain’t over till it’s over!

Meanwhile, the video below, also from Mick Kalber, shows the view from the air:

May 6, 2018 HUGE Fissure Eruption from Mick Kalber on Vimeo.

The eruptive activity began on April 30, 2018, when the floor of Kilauea’s crater began to collapse. Earthquakes followed, including one that measured magnitude +6.9, a very strong earthquake. All the while, lava was being pushed into new underground areas that eventually broke through the ground in such areas as the Leilani Estates (population 1,560 at the 2010 census) near the town of Pahoa, Hawaii.

Evacuations in Leilani Estates began on May 4.

The USGS is doing a good job following the volcano on Twitter.

This video of Halema‘uma‘u lava lake from May 7 shows the agitated lake surface caused by intermittent rock falls. On May 6 the lake level was about 220 m (240 yards) below the crater rim and it continues to drop. #KilaueaErupts #usgs #hvo #hawaiianvolcanoobservatory #kilauea pic.twitter.com/gcAIwQX0pg

Another @CivilDefenseHI update: No change in activity; lava has covered 104 acres and destroyed 35 structures https://t.co/isPtTIVfcx Also, a new website has been set up to help the community response: https://t.co/VXGh77HqC5 #KilaueaErupts #LeilaniEstatesEruption #LeilaniEstates pic.twitter.com/5UBkwD2YAF

Kilauea is one of the world’s most active volcanoes, and it’s the youngest and southeastern-most volcano on Hawaii’s Big Island. Eruptive activity along the East Rift Zone has been continuous since 1983.

Bottom line: Images from the May 2018 eruption of Kilauea volcano on Hawaii’s Big Island.