There were more than a dozen wildfires burning in California, as of September 20. 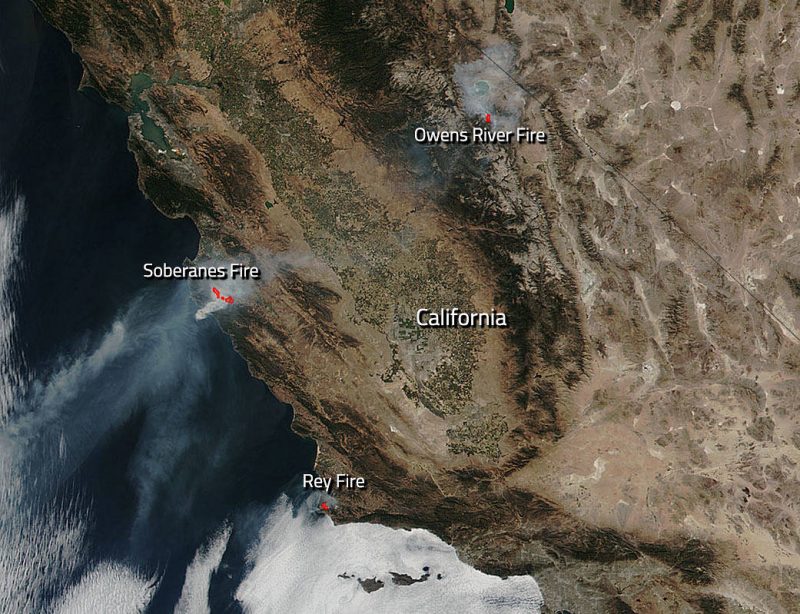 Actively burning areas are outlined in red. Image via NASA

A NASA satellite captured this image of three wildfires burning in California on September 18, 2016.

The wildfires pictured aren’t the only ones currently burning in the state of California. In fact, Calfire lists a more than a dozen fires burning as of September 20, 2016.

See this map for fires currently burning in California

The Soberanes Fire on the west coast near Monterey has been active since July 22, 2016. As of September 19, Inciweb reported that the size of the fire is 117,656 acres acres. Containment has grown to 67% and 2,012 personnel continue to fight the Soberanes Fire as burns in remote, rugged terrain, including in the Ventana Wilderness. The fire was caused by an illegal campfire.

The Owens River Fire, the most recent fire, began this past Saturday afternoon (September 17, 2016). It has already grown to 6,050 acres and is only 20% contained, according to a September 19 evening update. The fire is near Clark Canyon which is a popular climbing area, and nearby ranches and developments have been evacuated.

Curious where the fires are burning in California? See our interactive Google fire map: https://t.co/irlhqp4hrn pic.twitter.com/WzWZwE6jER

The Rey Fire, on the west coast near Santa Barbara in the Los Padres National Forest, began on August 18. According to a NASA statement, the Rey Fire is currently 100% contained:

The size of the fire area is 33,606 acres. At present this fire is in the suppression repair and monitor stage. There is no expectation of further fire activity with the Rey Fire.

Bottom line: A September 18, 2016 satellite view of three California wildfires. They are by no means the only fires currently burning in the state.

2016 has been a bad year for wildfires in the forests of eastern Russia, too