Rhode Island’s official nickname is “The Ocean State,” and it’s living up to the name: late last week (July 22), NOAA Administrator Jane Lubchenco joined Rhode Island Governor Lincoln Chafee in giving final approval to the Rhode Island Ocean Special Area Management Plan (Ocean SAMP). The plan is the first of its kind in the United States. Its goal is to enhance commercial, recreational and environmental goals through the extensive creation of marine “zones” off Rhode Island’s coast. We caught up with Monica Allen, a spokesperson for NOAA who accompanied Jane Lubchenco to the event. She said:

The Ocean SAMP is significant to Rhode Island, and to the nation. It sets a model for the nation. Over the past several years, Rhode Island’s Coastal Resources Management Council has brought together the windpower industry, fisheries, marine experts, all the [coastal] stakeholders. We used scientific information to establish a process that helps our state find and approve the best uses for coastal areas, and, at the same time, brings everybody to the table, so there aren’t conflicts.

In other words, we don’t want to put a wind farm in an area that’s, say, the most productive fishing area. We want to get ahead of the conflict. So we’re asking: where is the best place for a wind farm? Is there a shipping lane that absolutely can’t be moved? How about the best fishing site? The SAMP is a kind of a visioning-out of 1500 square miles of ocean waters.

SAMP’s approval means that enforceable policies … for protecting existing activities [off the coast of Rhode Island] such as fishing, important habitats and archaeological resources, and identifying areas suitable for energy projects, may be applied to federal actions in federal waters.

In other words, Rhode Island’s Ocean SAMP indicates an official willingness to establish laws beneficial to marine and human life, and also a willingness to enforce such laws. (This made us think of a discussion we had last week with Dr. Bruce Collette about the dangerously sharp reduction in tuna stocks across the world. “We know what kind of policies help wildlife,” he said, “It’s just that many good policies aren’t enforced by local authorities.”) 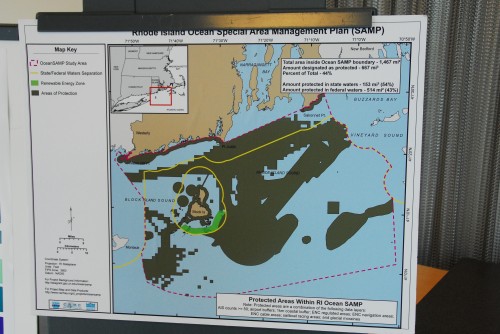 It took local and federal agencies and Rhode Island’s scientific experts, many of them from the University of Rhode Island, two years to create the Ocean SAMP. SAMP’s range of study covers approximately 1,467 square miles over portions of Block Island Sound, Rhode Island Sound, and the Atlantic Ocean.

The official SAMP document, which you can download, offers a comprehensive analysis of everything from Rhode Island’s fish, to its offshore birds, to noise pollution in its waters, to the local abundance of marine chlorophyll. On top of this, the SAMP analysis also covers the viability of wind farms being built offshore. As its press release notes:

This new, innovative ocean management plan improves state review processes and policies to facilitate the development of offshore projects that could lead to the creation of hundreds of wind energy jobs and balance energy development with transportation, fishing, recreation and environmental stewardship along the state’s coast and adjacent federal waters.

As one of SAMP’s many sub-studies indicated in slightly more technical terms, wind power in Rhode Island is viable:

A directional analysis of the wind speed and power was performed for WIS site 101 at 80 m. The analysis shows that the winds from the northwest to southeast have the highest frequency of occurrence, with the power being from westerly to northwesterly winds. Wind power is substantially larger in the winter months, intermediate in spring and fall and smallest during the summer. The analysis was performed for all and extractable. The patterns are exactly the same but the magnitude of the latter is about 90% of the former.

This kind of research represents a first step in the construction of windfarms off the coast of Rhode Island. The state says it’s invested not only in upkeeping its coastal fisheries, marine habitats and recreational areas, but it is also interested in reducing its carbon footprint. As the authors write in their overview of SAMP:

And, as Jane Lubchenco noted at the SAMP approval ceremony, according to Monica Allen, “Other states can look to this as a model. And one of the strengths of the plan is that it brings all the stakeholders to the table.”