What’s been called a new kind of aurora – the striking sky phenomenon dubbed STEVE – isn’t an aurora at all, according to a new study. 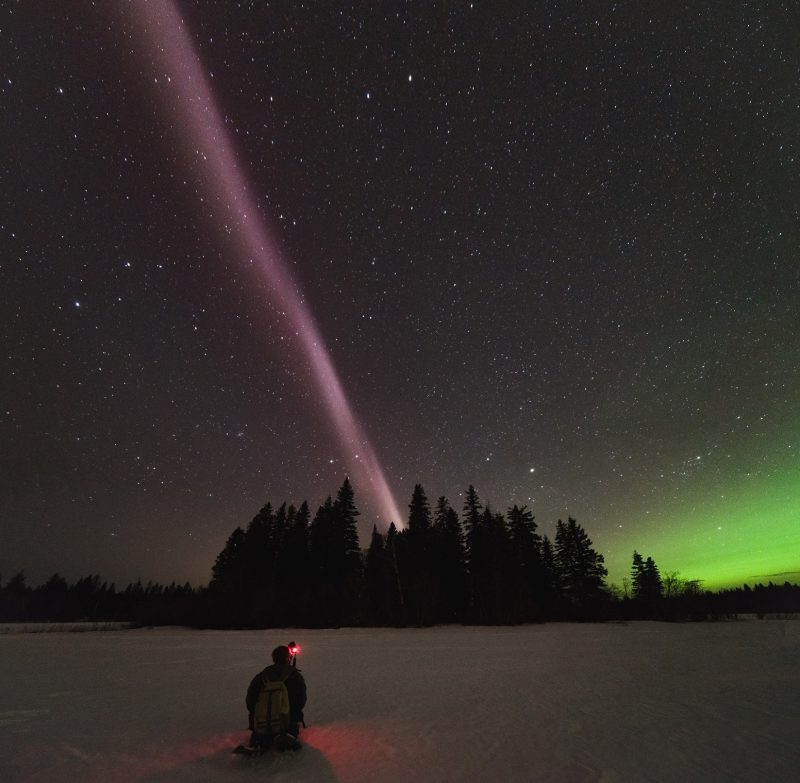 The narrow streak of white-purple is the sky phenomenon called STEVE. A vibrant green aurora is seen in the distant north, located to the right in the photo. Photo via Ryan Sault of Alberta Aurora Chasers/AGU.

The American Geophysical Union (AGU) said on August 20, 2018, that STEVE – an aurora-like sky phenomenon captured for decades by amateur photographers and studied by scientists since 2016 – isn’t an aurora. Instead, according to a team led by a space physicist at the University of Calgary in Canada, it’s something entirely new, although exactly what isn’t known. Bea Gallardo-Lacourt, who led the new study, commented:

Our main conclusion is that STEVE is not an aurora. So right now, we know very little about it. And that’s the cool thing, because this has been known by photographers for decades. But for the scientists, it’s completely unknown.

STEVE consists of ribbons of purple and white light. Amateur photographers dubbed it STEVE, and scientists adopted the name when they first became aware of it in 2016. According to a statement from the AGU:

When scientists first looked at images of STEVE, they realized the lights were slightly different than light from typical auroras but were not sure what underlying mechanism was causing them.

In [the] new study, researchers analyzed a STEVE event in March 2008 to see whether it was produced in a similar manner as the aurora, which happens when showers of charged particles rain down into Earth’s upper atmosphere. The study’s results suggest STEVE is produced by a different atmospheric process than the aurora, making it an entirely new type of optical phenomenon.

The study authors have concluded that STEVE is a kind of skyglow, or glowing light in the night sky, that’s distinct from an aurora. Joe Borovsky, a space physicist at the Space Science Institute in Los Alamos, New Mexico – who was not connected to the new study – commented:

This is really interesting because we haven’t figured it out and when you get a new problem, it’s always exciting. It’s like you think you know everything, and it turns out you don’t.

The sun causes auroras when it sends gusts of charged particles – electrons and protons – hurtling across our solar system as what’s called the solar wind. As Earth moves through this particle stream, our planet’s magnetic field and atmosphere react. When the charged particles from the sun strike atoms and molecules in Earth’s atmosphere, they excite those atoms, causing them to light up, producing an auora. Read more: What causes the aurora?

Auroras are visible every night if viewing conditions are right, but the thin light ribbons of STEVE were only visible a few times per year. The light from STEVE was also showing up closer to the equator than the aurora, which can only be seen at high latitudes.

After [a first study, published in March, 2018], of which Gallardo-Lacourt was a co-author, the researchers wanted to find out if STEVE’s light is produced by particles raining down into the ionosphere, as typically happens with the aurora, or by some other process. In the new study, Gallardo-Lacourt and her colleagues analyzed a STEVE event that happened over eastern Canada on March 28, 2008, using images from ground-based cameras that record auroras over North America.

They coupled the images with data from NOAA’s Polar Orbiting Environmental Satellite 17 (POES-17), which happened to pass directly over the ground-based cameras during the STEVE event. The satellite is equipped with an instrument that can measure charged particles precipitating into the ionosphere.

The study’s results suggest STEVE is an entirely new phenomenon distinct from typical auroras. The POES-17 satellite detected no charged particles raining down to the ionosphere during the STEVE event, which means it is likely produced by an entirely different mechanism, according to the authors.

The researchers said STEVE is a new kind of optical phenomenon they call ‘skyglow.’ Their next step is to see whether the streams of fast ions and hot electrons in the ionosphere are creating STEVE’s light, or if the light is produced higher up in the atmosphere.

Bottom line: STEVE – an aurora-like sky phenomenon captured for decades by amateur photographers and studied by scientists since 2016 – isn’t an aurora, according to a new study by scientists.

Source: New science in plain sight. Citizen scientists lead to the discovery of optical structure in the upper atmosphere

Source: On the origin of STEVE. Particle precipitation or ionospheric sky-glow?