“The whole food chain is being thrown out of whack … This means that the reef has far less resilience, which is a real worry.” – Mark Meekan

Scientists drew this conclusion after studying coral reef systems about 185 miles (300 km) off the coast of Australia’s North West, where sharks are heavily fished for their fins. The scientists published their results in the journal PLOS ONE on September 18, 2013.

Coral reefs undergo changes for several reasons. Violent weather disturbances, overfishing, pollution, and climate change all have the potential to affect them. It can be difficult to disentangle how different actions affect reefs, whether they are natural or human-induced. The reef systems in this study, however, have been observed since 1994, with more substantial data obtained within the past decade. The reefs’ relative isolation – and commercial fishing preference only for high value catches such as sharks – provided scientists with an opportunity to observe how overfishing of sharks affected those reef systems. 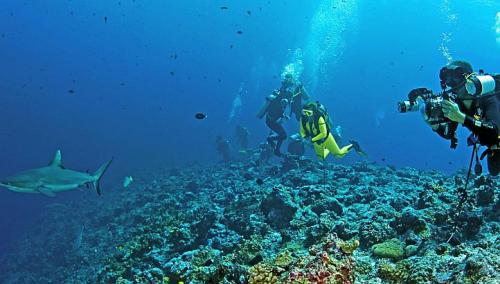 Mark Meekan, of the Australian Institute of Marine Science, said in a press release:

… Our analysis suggests that where shark numbers are reduced, we see a fundamental change in the structure of food chains on reefs. We saw increasing numbers of mid-level predators – such as snappers – and a reduction in the number of herbivores such as parrotfishes. The parrotfishes are very important to coral reef health because they eat the algae that would otherwise overwhelm young corals on reefs recovering from natural disturbances.

The decline in herbivorous fish, in turn, could be due to a large increase in mid-level predators, filling the void left by fewer shark in the reef system.

Scribbled snapper at Australia’s Great Barrier Reef. This is one of several species of snapper found in Australian waters. Sharks prey on snappers like this. With fewer sharks, these snappers increase and take out the algae-eating fish. Image via Eric Johnson/NOAA (via Flickr.com).

A Bicolour Parrotfish, similar to fish observed in the Australian shark study, seen at Osprey Reef, Australia. This fish is an algae-eater. It helps protect coral reefs. But without top predators, such as sharks, these fish suffer, and coral reefs are at risk. Image via Flickr user Richard Ling.

In an interview with The Guardian, Meekan said:

Going by our surveys, around four sharks a day were being taken from these reefs. This doesn’t sound like a lot, but it has been going on for a long time. The fishermen come in their sailing prows, which can dry an awful lot of shark fin on the decks.

The result of this is that the whole food chain is being thrown out of whack. Snappers are far more abundant when the sharks are gone and they take out the algae-eating fish.

This means that the reef has far less resilience, which is a real worry. Sharks are like a good insurance policy for reefs. We know that with climate change there will be more cyclones and bleaching events, so having sharks in there is one of the best ways we can ensure the health of reefs.

Large numbers of reef sharks are being removed by fishing, I’m sad to say. They only have a few pups, possibly every second or third year, so it takes a long time for them to bounce back. The upside is that a well protected marine reserve can help protect sharks, and the reef around them.

Bottom line: Coral reefs are harmed when shark numbers plummet due to overfishing. Scientists have found that low shark populations cause a decline in herbivorous fish that graze on algae that would otherwise overwhelm reef systems. These findings, recently published in the journal PLOS ONE, were made by scientists from Australia and Canada studying coral reef systems about 185 miles off the coast of northwestern Australia, where sharks are heavily fished for their fins.