In July, scientists spotted a rare South Pacific nautilus – considered to be one of the rarest animals on Earth – for the first time in three decades. 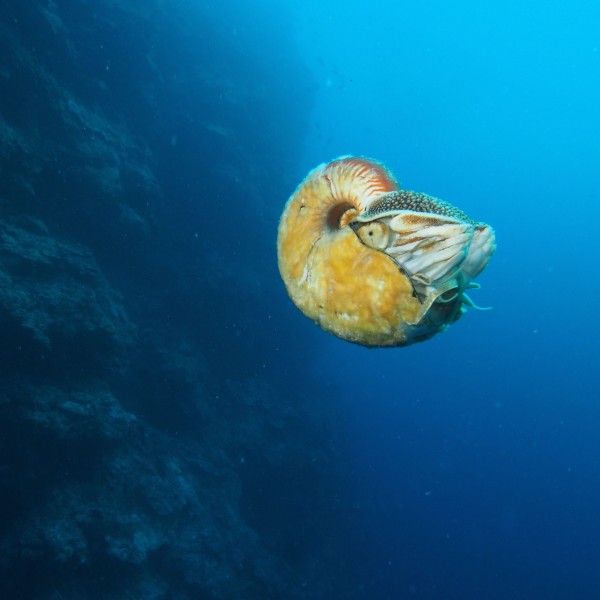 The nautilus known as Allonautilus scrobiculatus off the coast of Ndrova Island in Papua New Guinea. Image via Peter Ward

University of Washington reported today (August 25, 2015) that a biologist there has encountered what he considers one of the world’s rarest animals. It’s a species of nautilus – or creature with a light external spiral shell and many short tentacles around the mouth – called Allonautilus scrobiculatus. Peter Ward and a colleague originally discovered this nautilus species in 1984 off Ndrova Island in Papua New Guinea. They took samples for study and realized that the gills, jaws, shell shape and male reproductive structures of this species was unique. Then no one saw this creature again for over 30 years.

Nautiluses are small, distant cousins of squid and cuttlefish. They are an ancient lineage of animal, sometimes called a “living fossil” because their shells appear in the fossil record over a 500-million-year period. Ward explained:

Some features of the nautilus — like the shell giving it the ‘living fossil’ label — may not have changed for a long time, but other parts have.

He said in a statement issued today that Allonautilus sports a distinctive accessory clearly visible in photographs:

It has this thick, hairy, slimy covering on its shell.

When we first saw that, we were astounded. 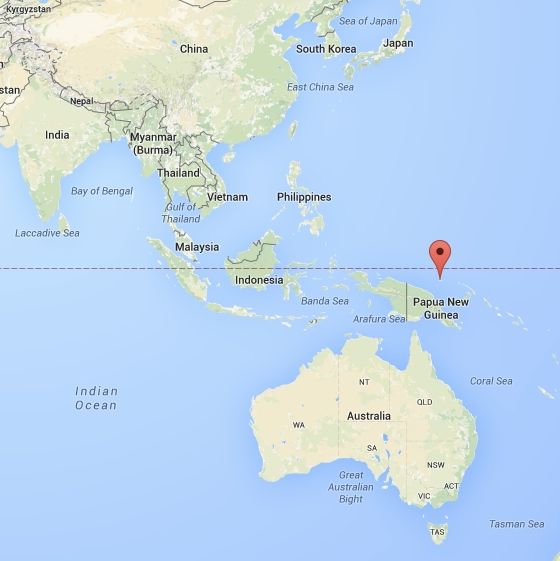 The red balloon marks the location of Ndrova Island, near Papua New Guinea, location of the rare nautilus sighting in July, 2015.

Ward rediscovered the nautilus in July 2015, after returning to Papua New Guinea to survey nautilus populations. Since nautiluses are expert scavengers, he and his colleagues set up bait-on-a-stick systems each evening. They suspended fish and chicken meat on a pole between 500 and 1,300 feet (150 to 400 meters) below the sea surface and filmed activity around the bait for 12 hours.

One night’s footage from a site off of Ndrova Island showed an Allonautilus approach the bait. It was soon joined by another nautilus, and the two fought for access to the bait until a sunfish arrived on the scene. Ward said:

For the next two hours, the sunfish just kept whacking them with its tail.

The team also used baited traps to capture several nautiluses, including Allonautilus, at a depth of about 600 feet (180 meters). Since most nautiluses do not like the heat, the researchers brought them to the surface in chilled water to obtain small tissue, shell and mucous samples and measure the dimensions of each animal.

They then transported the animals back to their capture site and released them.

Ward commented that he’s concerned that illegal fishing and mining operations for nautilus shells have already decimated some populations. He said this unchecked practice could threaten a lineage that has been around longer than the dinosaurs were and survived the two largest mass extinctions in Earth’s history.

Read the full story of Ward’s rediscovery of Allonautilus scrobiculatus 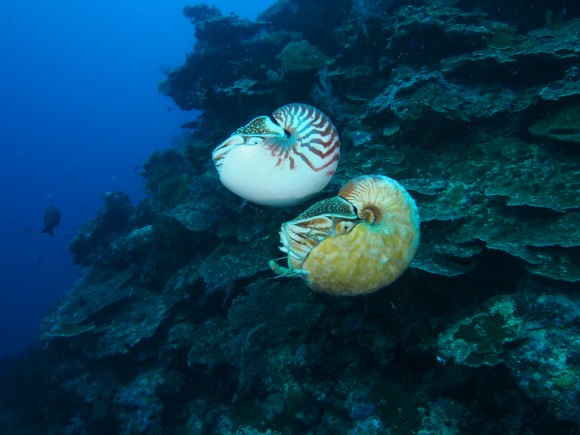 Nautilus pompilius swimming above a rare Allonautilus scrobiculatus off the coast of Ndrova Island in Papua New Guinea. Image via Peter Ward

Bottom line: Scientists at University of Washington discovered a rare nautilus species in 1984. Then no one saw it again until some of these same scientists searched for it, set bait for it, and captured some in July, 2015.