Record number of billion-dollar disasters in U.S. in 2020

Last year, the U.S. experienced a record-smashing 22 weather and climate disasters that killed at least 262 people and injured scores more. Damages exceeded $1 billion each and totaled approximately $95 billion for all 22 events.

Irvine, California, on October 28, 2020, with 2 wildfires raging in the hills behind the city. Image via NOAA.

In 2020, the U.S. experienced a record-smashing 22 weather and climate disasters that killed at least 262 people and injured scores more, including wildfires, hurricanes, tornadoes, drought, and heatwaves. Damages from these disasters exceeded $1 billion each and totaled approximately $95 billion for all 22 events. That’s according to a NOAA report released January 8, 2021.

EarthSky lunar calendars are back in stock! We’re guaranteed to sell out. Get one while you can!

In 2020, a record number of named tropical storms formed in the Atlantic, with a record 12 of them making landfall. The United States also had its most active wildfire year on record, thanks to very dry conditions in the U.S. West and unusually warm temperatures throughout much of the country.

A team of disaster scientists, writing in The Conversation, said:

The Atlantic had so many hurricanes, meteorologists ran out of tropical storm names for only the second time. Across the Midwest, extreme storms flattened crops and tore up buildings. Western states repeatedly broke records for their largest wildfires on record. Globally, [2020] was tied for the hottest year on record.

Learn about the methodology and data sources for calculating the billion-dollar disasters. 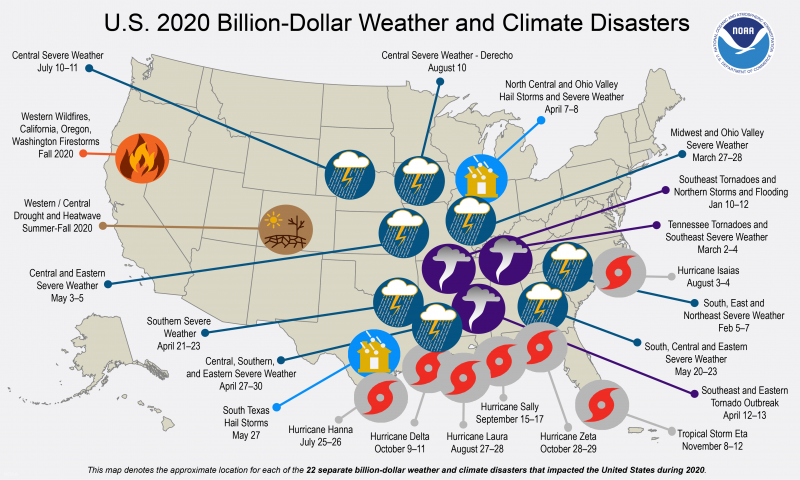 View larger. | A map of the United States plotted with the locations and dates for the record-breaking 22 billion-dollar weather and climate disasters that stuck the country in 2020. Image via NOAA.

Here’s a list of the billion-dollar climate and extreme weather events across the U.S. in 2020, according to scientists at NCEI:

The seven billion-dollar tropical cyclones were the most in one year since NOAA started keeping track of billion-dollar disasters in 1980. The extremely active 2020 Atlantic hurricane season produced an unprecedented 30 named storms, with 12 making landfall in the continental U.S. The combined cost of the seven tropical systems was approximately $40.1 billion, more than 42% of the total U.S. billion-dollar disaster price tag in 2020.

According to the U.S. Drought Monitor, 2020 ended with extreme and exceptional drought conditions enveloping about 22% of the contiguous U.S., the largest expanse since August 2012.

– 3 tornado outbreaks (including the Nashville tornado and Easter outbreak) 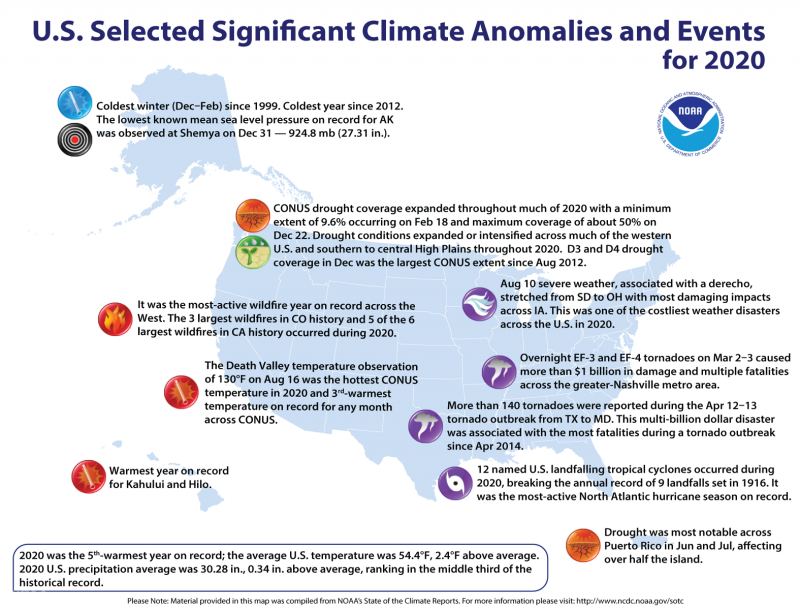 View larger. | A map of the United States plotted with significant climate events that occurred in 2020. You can see full climate report highlights at National Centers for Environmental Information. Image via NOAA. 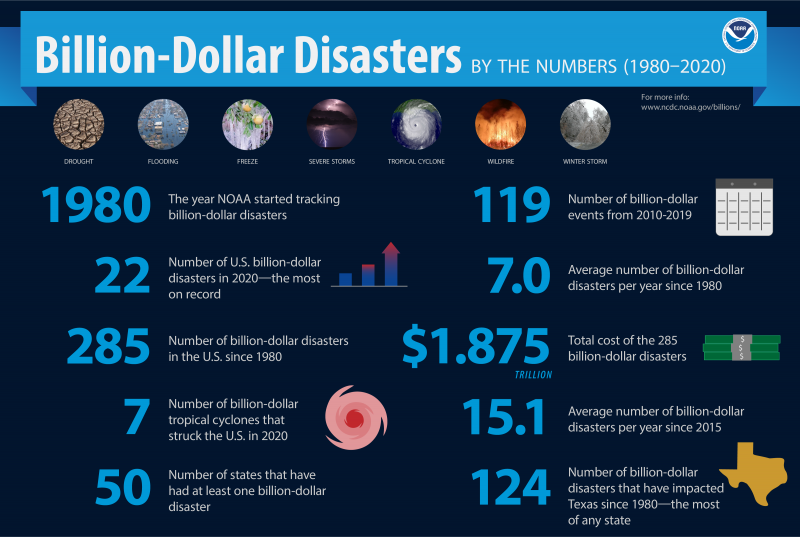 Bottom line: The U.S. endured a record-breaking 22 billion-dollar weather and climate disasters in 2020.