Considering both poles in February 2017, Earth essentially lost the equivalent of a chunk of sea ice larger than Mexico, in contrast to the average global minimum for 1981-2010.

Scientists at NASA and the National Snow and Ice Data Center (NSIDC) in Boulder, Colorado said on March 22, 2017 that Arctic sea ice probably reached its 2017 maximum extent on March 7, and that this year’s maximum represents another record low. Meanwhile, on the opposite side of the planet, on March 3 sea ice around Antarctica hit its lowest extent ever recorded by satellites at the end of summer in the Southern Hemisphere. NASA called it:

… a surprising turn of events after decades of moderate sea ice expansion.

It is tempting to say that the record low we are seeing this year is global warming finally catching up with Antarctica. However, this might just be an extreme case of pushing the envelope of year-to-year variability. We’ll need to have several more years of data to be able to say there has been a significant change in the trend.

Satellites have been continuously measuring sea ice in 1979, NASA said, and on February 13, the combined Arctic and Antarctic sea ice numbers were at their lowest point since. 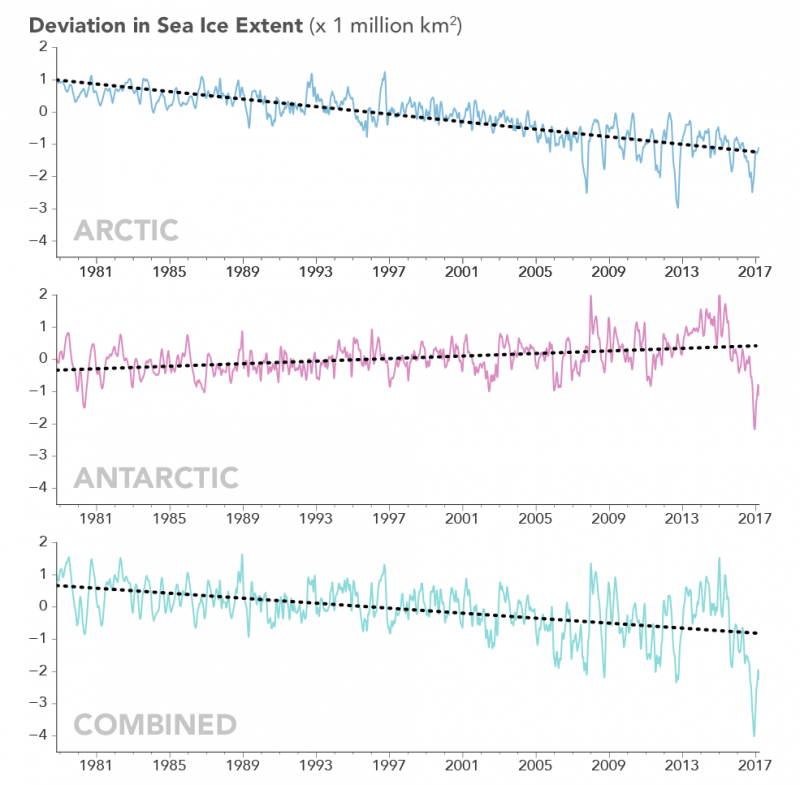 These line graphs plot monthly deviations and overall trends in polar sea ice from 1979 to 2017 as measured by satellites. The top line shows the Arctic; the middle shows Antarctica; and the third shows the global, combined total. The graphs depict how much the sea ice concentration moved above or below the long-term average. Arctic and global sea ice totals have moved consistently downward over 38 years. Antarctic trends are more muddled, but they do not offset the great losses in the Arctic. Image and caption via Joshua Stevens/ NASA Earth Observatory.

NASA explained the seasonal cycle of sea ice’s growth and shrinkage at Earth’s poles, and described specific weather events this year that led to the lower-than-average sea ice:

The ice floating on top of the Arctic Ocean and surrounding seas shrinks in a seasonal cycle from mid-March until mid-September. As the Arctic temperatures drop in the autumn and winter, the ice cover grows again until it reaches its yearly maximum extent, typically in March. The ring of sea ice around the Antarctic continent behaves in a similar manner, with the calendar flipped: it usually reaches its maximum in September and its minimum in February.

We started from a low September minimum extent. There was a lot of open ocean water and we saw periods of very slow ice growth in late October and into November, because the water had a lot of accumulated heat that had to be dissipated before ice could grow. The ice formation got a late start and everything lagged behind – it was hard for the sea ice cover to catch up.

NASA also said the Arctic’s sea ice maximum extent has dropped by an average of 2.8 percent per decade since 1979. The summertime minimum extent losses are nearly five times larger: 13.5 percent per decade. Besides shrinking in extent, the sea ice cap is also thinning and becoming more vulnerable to the action of ocean waters, winds and warmer temperatures.

This year’s record low sea ice maximum extent might not necessarily lead to a new record low summertime minimum extent, since weather has a great impact on the melt season’s outcome, Meier said. But, he added:

… it’s guaranteed to be below normal.

Antarctic sea ice saw an early maximum extent in 2016, followed by a very rapid loss of ice starting in early September. Since November, daily Antarctic sea ice extent has continuously been at its lowest levels in the satellite record. The ice loss slowed down in February.

This year’s record low happened just two years after several monthly record high sea ice extents in Antarctica and decades of moderate sea ice growth. The Arctic and Antarctica are very different places; the Arctic is an ocean surrounded by northern continents, while Antarctica is a continent surrounded by ocean. In recent years, climage scientists have pointed to this difference to help explain why the poles were reacting to the trend of warming global temperatures differently.

But many had said they expected sea ice to begin decreasing in Antarctica, as Earth’s temperatures continue to warm. Claire Parkinson, a senior sea ice researcher at Goddard, said on March 22:

There’s a lot of year-to-year variability in both Arctic and Antarctic sea ice, but overall, until last year, the trends in the Antarctic for every single month were toward more sea ice.

Last year was stunningly different, with prominent sea ice decreases in the Antarctic.

To think that now the Antarctic sea ice extent is actually reaching a record minimum, that’s definitely of interest.

Bottom line: Considering both poles in February 2017, Earth essentially lost the equivalent of a chunk of sea ice larger than Mexico, in contrast to the average global minimum for 1981-2010.

Via NASA and NSIDC.