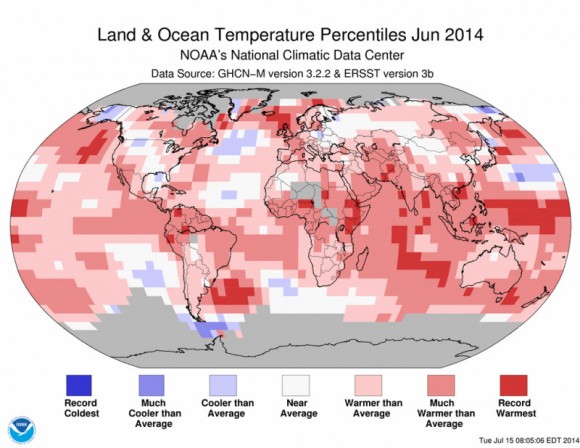 Most of the world experienced warmer-than-average monthly temperatures, with record warmth across part of southeastern Greenland, parts of northern South America, areas in eastern and central Africa, and sections of southern and southeastern Asia. Similar to May, scattered sections across every major ocean basin were also record warm. Notably, large parts of the western equatorial and northeastern Pacific Ocean and most of the Indian Ocean were record warm or much warmer than average for the month. A few areas in North America, Far East Russia, and small parts of central and northeastern Europe were cooler or much cooler than average.

A monthly summary from NOAA’s National Climatic Data Center in Asheville, NC, is part of the suite of climate services NOAA provides to government, the business sector, academia and the public to support informed decision making.