First recorded occurrence of three Category 4 hurricanes in central and eastern Pacific basins at once. Hurricane Center in Honolulu issuing advisories on all three.

NASA’s Terra satellite just released this August 29 image of Hurricanes Kilo, Ignacio, and Jimena, all Category Four Hurricanes. According to the Weather Channel:

This is the first recorded occurrence of three Category 4 hurricanes in the central and eastern Pacific basins at the same time. In addition, it’s also the first time with three major hurricanes (Category 3 or stronger) in those basins simultaneously, according to hurricane specialist Eric Blake of the National Hurricane Center.

Read more below, and for updated forecasts and local effects to Hawaii, visit the CPHC website: https://www.prh.noaa.gov/cphc.

At 5 a.m. EDT (0900 UTC) on August 30, the center of hurricane kilo was located near latitude 18.6 north and longitude 176.8 west. Kilo was moving toward the west-northwest near 9 mph (15 kph). Kilo is expected to curve toward the northwest…then west northwest over the next two days.

Maximum sustained winds are near 140 mph (220 kph) with higher gusts. Kilo is a category four hurricane on the Saffir-Simpson Hurricane wind scale. Little change is expected for the next 12 hours…then slight weakening through 48 hours. The estimated minimum central pressure is 940 millibars.

Kilo is expected to continue remaining a major hurricane through Thursday, September 3 is it moves to the north-northwest while remaining away from and to the west-southwest of Midway Island, Kure Atoll, Pearl and Hermes Atoll. For updated forecasts and local effects to Hawaii, visit the CPHC website: https://www.prh.noaa.gov/cphc. 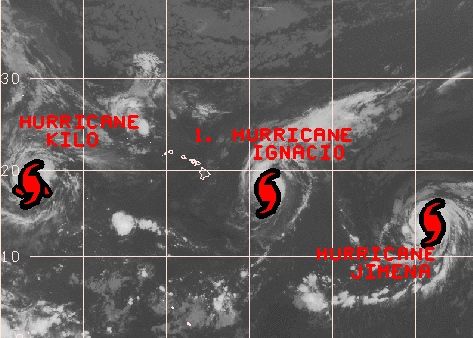 On August 30, a tropical storm watch was in effect for Maui county…including the islands of Maui…Molokai…Lanai and Kahoolawe, in addition to Hawaii County.

Like Kilo, Ignacio is a category four hurricane on the Saffir-Simpson Hurricane wind scale. Maximum sustained winds are near 140 mph (220 kph). The CPHC expects Ignacio to weaken through Tuesday, September 2.

At 8 a.m. EDT (2 a.m. HST/1200 UTC) the center of Hurricane Ignacio was located near latitude 17.9 north and longitude 148.2 west. Ignacio is moving toward the northwest near 8 mph (13 kph) and this motion Is expected to continue for the next couple of days. On the forecast track…the center of Ignacio is expected to pass to the northeast of the big island on Monday, then northeast of the smaller islands Tuesday. The estimated minimum central pressure is 948 millibars. For the National Weather Service local statement on Ignacio on August 30: https://www.prh.noaa.gov/hnl/pages/HLS.php.

Meanwhile, an astronaut aboard the International Space Station, @Astro_Kimiya, captured some amazing images of the eye of Jimena.

Hurricane JIMENA. It's really scary to see the eye of the hurricane closely… pic.twitter.com/EDr6X5vvuo

Like Kilo and Ignacio, Jimena is a category 4 hurricane on the Saffir-Simpson Hurricane Wind Scale. Maximum sustained winds have decreased to near 130 mph (215 kph) with higher gusts. Fluctuations in intensity are possible during the next day or so, but Jimena is expected to remain a major hurricane through Monday, according to the National Hurricane Center.

Jimena’s estimated minimum central pressure is 947 millibars. Jimena is moving toward the west-northwest near 13 mph (20 kph) and this general motion is expected to continue for the next couple of days. For updated forecasts, visit the National Hurricane Center: www.nhc.noaa.gov 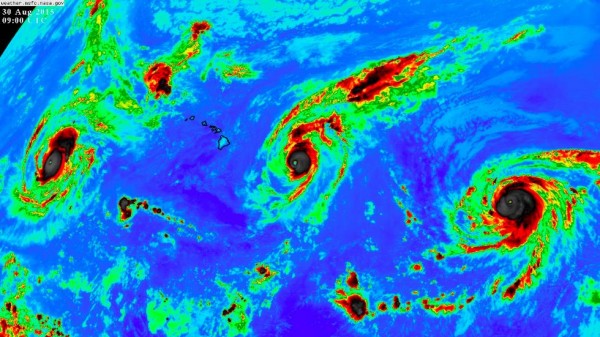 Bottom line: It’s the first recorded occurrence of three Category 4 hurricanes in central and eastern Pacific basins at once. The Central Pacific Hurricane Center in Honolulu, Hawaii is issuing advisories on all three.