Four months ago, a rare salamander species known as an olm – once believed to be baby dragons – laid 60 rare eggs. Now the eggs have hatched! 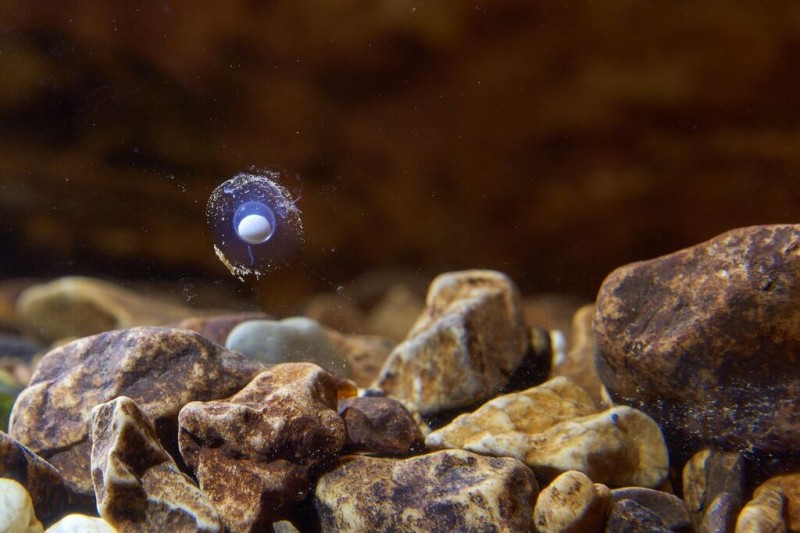 An egg attached to the wall of an aquarium holding captive olm was first noticed by a tour guide. Image credit: Postojna Cave Park.

Postojna Cave Park in Slovenia is home to a rare and endangered salamander species known as the olm. On January 30, 2016, a tour guide noticed that an olm in their captive population, housed in a display aquarium for tourists, had laid an egg. In the days that followed, she produced over 60 eggs. This caused considerable excitement since female olm only lay eggs once every six or seven years. 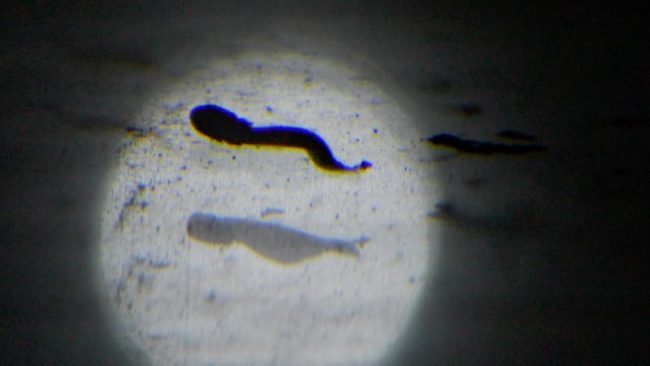 The first-born baby olm made its debut on May 30, 2016. Image credit: Postojna Cave.

The olm, known by their taxonomic name, Proteus anguinus, are rare endangered salamanders found in underground freshwater caves in karst formations of central and southeastern Europe. In the Postojna Cave system itself, only 4,000 olm have been documented in the wild.

These salamanders have a long slender body about 8 to 12 inches long, a short flat tail, four spindly limbs and thin almost transparent pink or yellowish-white skin. Their appearance could well be the reason why, in Slovenian folklore, olm were believed to be baby dragons washed out of underground dragons’ lairs during heavy rains. 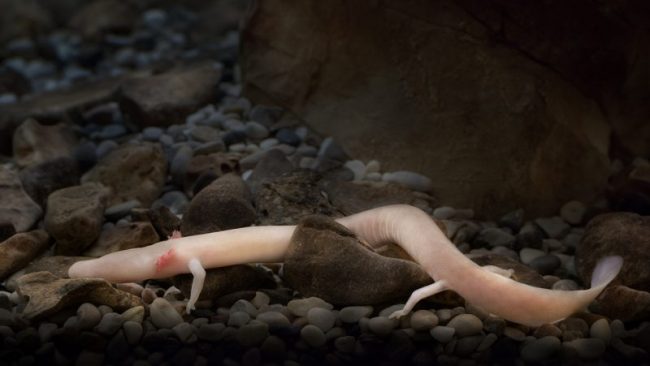 In January and February 2016, eggs deposited by a female olm in an exhibit tank were collected and placed in an isolation aquarium where they could develop with minimal disturbance. In the past four months, the developing embryos were under constant monitoring with infrared cameras. Live feeds from the cameras were on display for tourists who visited the cave. 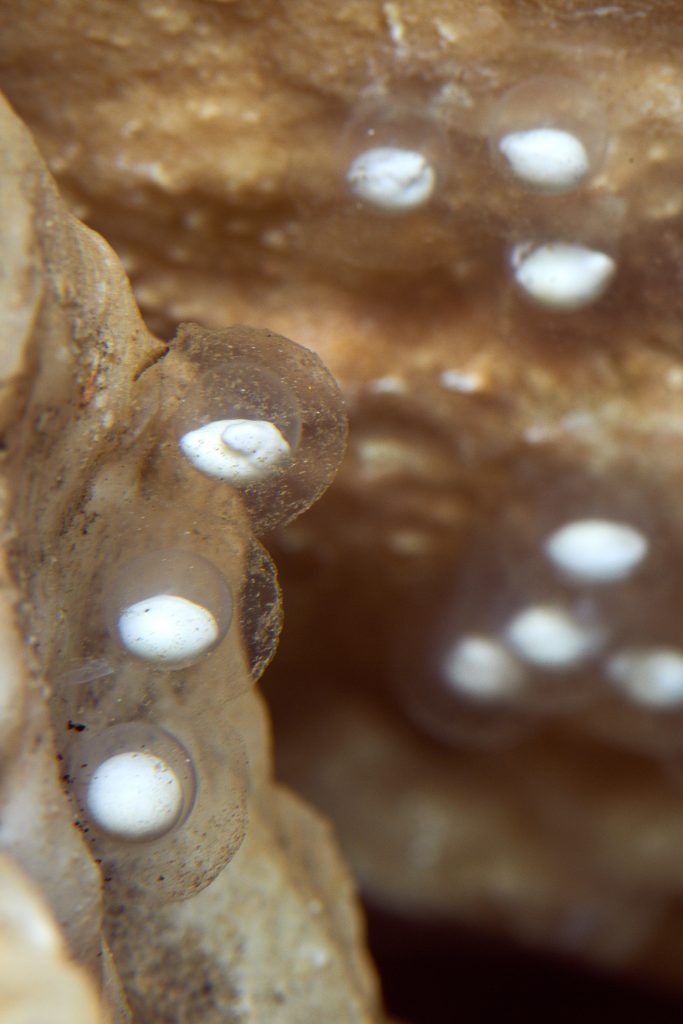 During early stages of development, the head, back and tail are already visible in the embryo that’s left of center in the photo. Image credit: Iztok Medja, Postojna Cave. 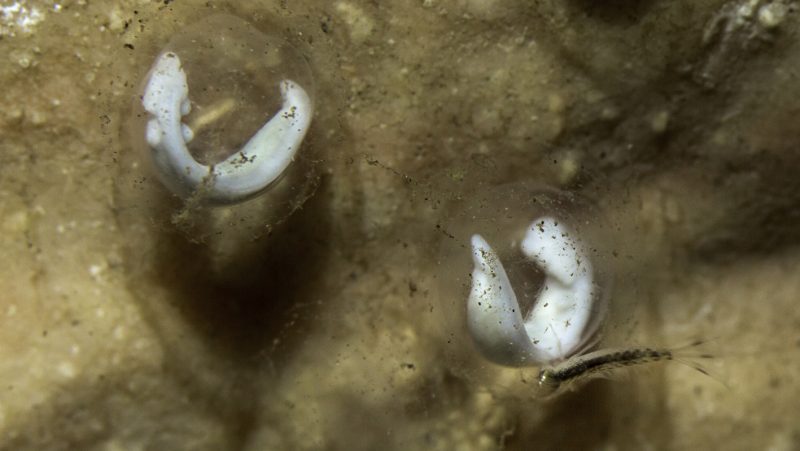 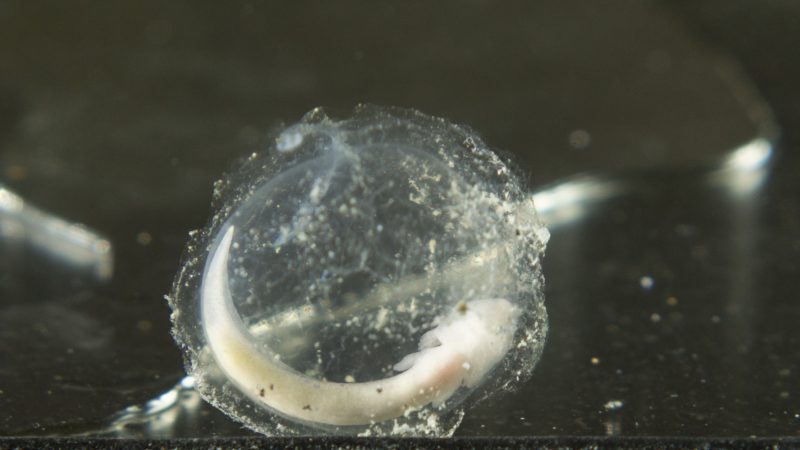 Towards the last few weeks of their long incubation cycle, the embryos could be seen moving in their eggs, in what the Postojna staff jokingly referred to as their “dragon dance.”

On May 30, 2016, a camera captured the emergence of the first so-called “baby dragons.” It surprised biologists by suddenly shooting out of its egg and swimming around the aquarium before finally settling to the bottom. Even though little is known about olm hatching, biologists had expected the baby to make several attempts to wriggle free from its egg.

The first baby olm makes its debut, at around 38 second into the video.

A second baby emerged on June 2nd, 2016. Twenty-one more siblings are expected to hatch in the coming days. 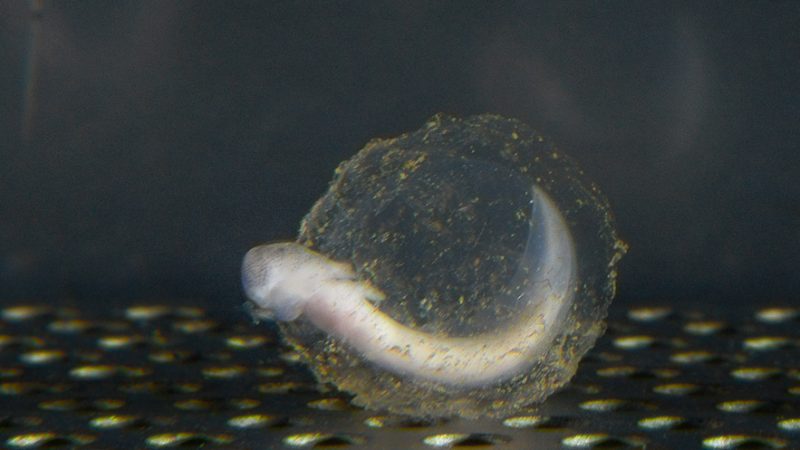 Biologists and staff at Postojna Cave are taking extraordinary measures to care for the embryos and babies of these endangered salamanders. In the wild, it’s estimated that only two out of 500 olm eggs hatch successfully, while others succumb to decay, environmental changes and predators. Only a small percentage of hatchlings survive to adulthood.

A spokesperson from the Postojna Cave said, in a press release,

The babies will soon need to be fed, as they are not living in a natural environment where it could feed on its own. We will change the water on a daily basis to avoid infections developing. If there are several babies, each will need to be in its own aquarium. We will have to set up a proper little nursery for each of them. And if all goes well, the baby dragons will grow into adults.

Bottom line: Four months after being laid, eggs of a rare and endangered salamander, known as the olm, are finally hatching at the Postojna Cave in Slovenia.