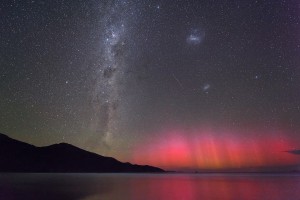 Aurora australis – or southern lights – on January 19, 2013 as captured by Colin Legg at Wilson’s Promontory in southernmost Australia. You can also see the Large and Small Magellanic Clouds in this photo, alongside the edgewise view into our Milky Way galaxy. The blue in the water is bioluminescence.

Thank you! Your submission has been received!
Oops! Something went wrong while submitting the form.
END_OF_DOCUMENT_TOKEN_TO_BE_REPLACED