As the climate warms, freshwater entering the Atlantic Ocean is expected to slow down thermohaline circulation. (Thermo = heat, haline = salt.) While current climate models predict a gradual decrease in ocean circulation over the 21st century, a new study published in the May 25, 2011 issue of Geophysical Research Letters suggests that a collapse of circulation in the Atlantic Ocean could occur suddenly if freshwater inputs become extensive.

Thermohaline circulation in the Atlantic Ocean is driven by a large mass of seawater that flows north from the equator. As warm tropical waters flow north, freshwater evaporates, leaving behind a cold, salty mass of seawater that sinks when it reaches southern Greenland due to its high density. The circulating mass of seawater is critical for drawing equatorial heat into northern regions and for delivering nutrients from the north to marine food webs further south via strong currents that form along the seafloor. 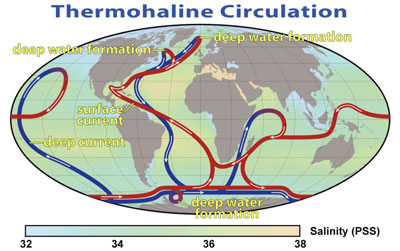 Freshwater entering the Atlantic Ocean from melting ice sheets, river runoff and increased precipitation can weaken thermohaline circulation by causing the seawater to become less dense and sink at a slower rate. A collapse of circulation in the Atlantic Ocean is of great concern to climate scientists because it could cause substantial cooling in northern countries and severely disrupt marine life and fisheries. A rapid disruption of Atlantic thermohaline circulation was the premise behind the 2004 disaster film “The Day After Tomorrow.”

Currently, climate models predict a 20 percent weakening of Atlantic thermohaline circulation by the end of the 21st century and such changes are expected to impact climate gradually over time. However, the new study published in Geophysical Research Letters suggests that disruptions of Atlantic thermohaline circulation could occur suddenly if freshwater inputs become extensive.

Lead author Ed Hawkins is a climate scientist at the University of Reading in the United Kingdom. His research focuses on reducing uncertainty and improving the predictability of climate models.

While threshold behavior has been observed in past climate models, this was the first time scientists were able to reproduce bistable Atlantic Ocean circulation patterns in a state-of-the-art climate model.

Fortunately, projected amounts of freshwater input from increased precipitation, river runoff and the melting of Greenland ice sheets at the end of the 21st century are not expected to be enough to cause a complete collapse of thermohaline circulation in the Atlantic Ocean. But, the math does come a little too close for comfort. Hence, future work that reduces uncertainties and improves the predictability of climate models will likely continue to be a priority area for research.