A USGS study identified plastic in more than 90% of rainwater samples taken from across Colorado.

In a new study, researchers from the United States Geological Survey (USGS) discovered multicolored microplastic shards, beads and fibers in more than 90 percent of rainwater samples taken from across Colorado, including samples from locations more than two miles (3,000 meters) high in Rocky Mountain National Park.

Researcher chemist Gregory Weatherbee is lead author of the USGS study. He told The Guardian:

I think the most important result that we can share with the American public is that there’s more plastic out there than meets the eye. It’s in the rain, it’s in the snow. It’s a part of our environment now.

They believe garbage dumped in the environment is the main source of microplastics, as well as plastic fibers released from synthetic clothes. 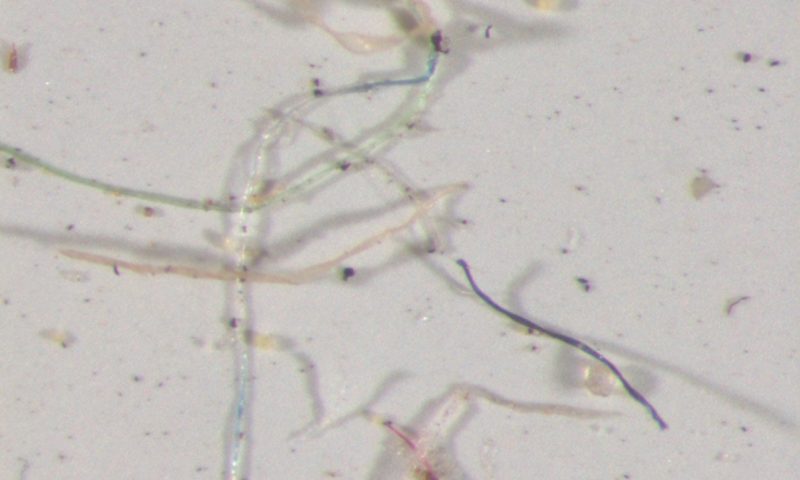 Rainwater samples collected across Colorado and analyzed under a microscope contained a rainbow of plastic fibers. Image via USGS.

The researchers, who were studying nitrogen pollution at the time, collected rainwater samples from across Colorado and analyzed them using microscopes.

The growth in single-use consumer plastics has fueled a surge in plastic pollution across the globe. Other recent studies have turned up microplastics high in the remote Pyrenees Mountains, in the deepest part of the ocean, in Arctic sea ice, and in U.S. groundwater.

Researchers estimate that there are now 5.25 trillion pieces of ocean plastic debris, and a recent report estimated the quantity of plastic in the sea will triple by 2025.

Bottom line: A recent study has discovered microplastics in rainwater over the Rocky Mountains.

Source: It is Raining Plastic