Sea ice in the Arctic in 2012 already appeared to be heading for a new record low. Then in early August, a long-lasting and powerful storm pushed through the Arctic.

As reported earlier via EarthSky, the extent of Arctic sea ice in 2012 appears to be heading toward a new record low. On August 1, ice extent was already below levels recorded for the same date in 2007, the year that currently holds the record for minimum ice extent in September, according to the National Snow and Ice Data Center. Adding to the already diminished ice extent across the Arctic was an unusually large, long-lasting, and powerful storm that pushed through the region around August 5 through August 8, 2012. A very strong area of low pressure pushed northward into the Arctic and intensified through that time period. The storm dropped to 965 hPa central pressure, which is extremely low and highly unusual for the Arctic at this time of the year. The storm apparently contributed to some of the melting that was already occurring in the Arctic. When the melting phase ends by the middle of September, 2012 might break 2007’s record low for Arctic sea ice. 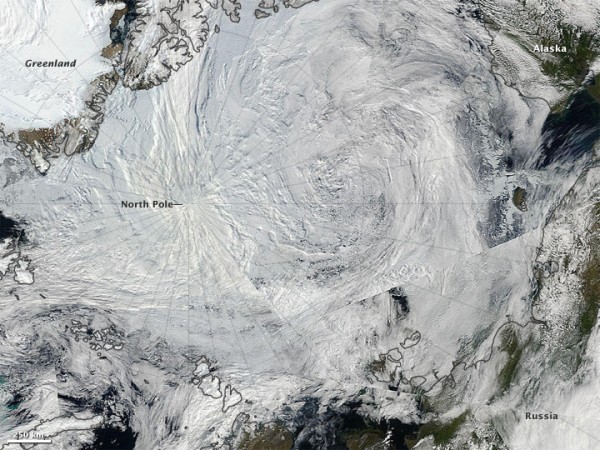 NASA’s Aqua satellite captured this natural-color image of the storm in the Arctic on August 7, 2012. The storm – which appears as a swirl – is directly over the Arctic in this image. NASA image by Jeff Schmaltz, LANCE/EOSDIS Rapid Response. 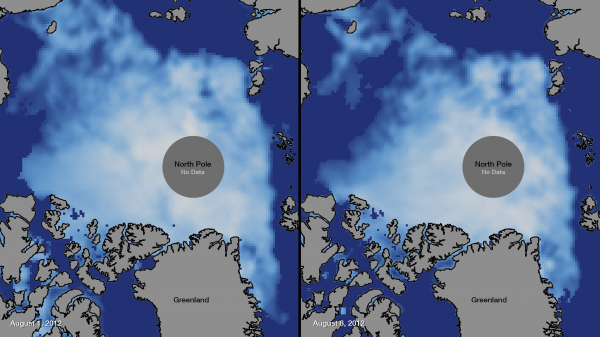 This image shows a before and after of the early August 2012 Arctic storm. In this image, the darkest blue colors indicate zero or very little ice concentrations. The brighter the colors, or whiter they become, the higher the ice concentrations become. After the storms pushed through the Arctic, ice concentrations were decreased. Image Credit: NOAA

This massive storm in the Arctic allowed a shift in Arctic sea ice concentrations across the region. Large reductions in the extent and concentration of sea ice can be seen in the left-hand side of each image above, where the Bering Sea empties into the Arctic Ocean. Strong polar lows in the Arctic can tear off large swaths of ice and push them to warmer locations. These storms can also mix up the ice and make it become slushy and upwell warmer waters to the surface. On average, Arctic cyclones last about 40 hours; as of August 9, 2012, this storm had lasted more than five days.

Arctic cyclones are more common during the summer than winter, and summer cyclones in the Arctic tend to be weaker than the storms that batter the region during the winter. According to Paul Newman, chief scientist for atmospheric sciences at NASA’s Goddard Space Flight Center, a storm this strong over the Arctic during the summer months is very unusual but not unheard-of. Newman stated that there have been about eight storms of similar strength during the month of August over the past 34 years of satellite records.

The strong storm over the Arctic can have large implications for sea ice extent in the region. According to Claire Parkinson, a climate scientist at NASA Goddard:

This could lead to a more serious decay of the summertime ice cover than would have been the case otherwise, even perhaps leading to a new Arctic sea ice minimum. Decades ago, a storm of the same magnitude would have been less likely to have as large an impact on the sea ice because the ice cover was thicker and more expansive.

More from Claire Parkinson on disappearing sea ice and its impacts 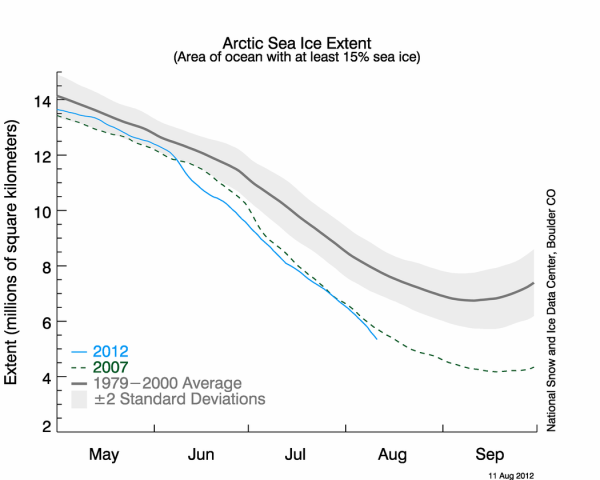 The year 2007 (dashed line) currently holds the record for minimum sea ice extent across the Arctic during September, the month that seasonal lows typically occur. This year, 2012, is on a path to beating 2007’s record low. Image Credit: National Snow and Ice Data Center

As melting increases each year, ice extent will slowly decrease as new ice that forms in the winter months has a better tendency of melting than older ice. 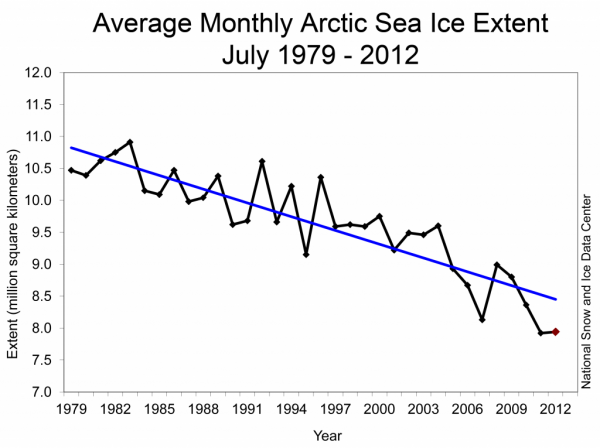 Monthly July ice extent for 1979 to 2012 shows a decline of 7.1% per decade. Image Credit: National Snow and Ice Data Center

Bottom line: A powerful polar low developed and pushed northward into the Arctic on August 5, 2012. The storm apparently helped break up Arctic sea ice, due to upwelling of warmer waters and the pushing of swaths of ice into warmer locations. Prio to the recent storm, sea ice extent in the Arctic had already been declining at record low levels across the region. We have another full month of melting before temperatures will slowly begin to drop again, as the winter months approach. Will 2012 beat out 2007 for record low sea ice extent since the satellite era? It is very possible, and there are no signs at the moment that the rapid melting of Arctic sea ice in 2012 is slowing down.