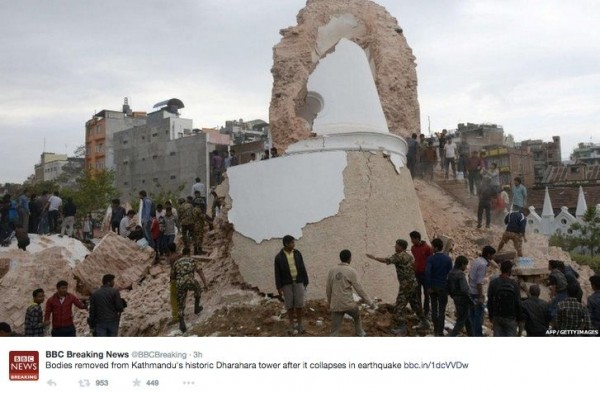 The death toll is still rising from the powerful 7.9-magnitude earthquake – an extremely strong earthquake – in Nepal today (April 25, 2015). Hundreds are reported to have died from the quake so far, which wrecked many historic buildings. USGS originally reported the quake at a 7.5-magnitude and later upgraded this estimate. The quake took place at 6:11 UTC (1:11 a.m. CDT). This powerful quake’s tremors were felt across the region, and into neighboring India, Pakistan and Bangladesh. The quake struck between the capital Kathmandu and the city of Pokhara about 120 miles (200 km) away. At least one strong aftershock (6.6 magnitude) has already occurred, with many smaller aftershocks, and more are expected.

– Eight bodies recovered from Mount Everest after an avalanche triggered by the quake in Nepal.

– The landmark Dharahara tower is among buildings reduced to rubble in Kathmandu.

Journalist Siobhan Heanue, of ABC News Australia, was in Kathmandu when the quake struck. She tweeted the following shocking before-and-after images:

I took these photos an hour apart. Was wandering when quake demolished temples before my eyes. Heartbreaking. pic.twitter.com/RYtIZI4725

The magnitude 7.9 earthquake that hit Nepal today was the result of a collision of great land plates on Earth. This process has caused deadly quakes in the past, including the 2005 Kashmir earthquake (7.6-magnitude) that killed over 80,000 people.

At the same time, according to USGS, just four events of magnitude 6 or larger have occurred within 150 miles (250 km) of the April 25, 2015 earthquake over the past century.

See a list of recent, significant earthquakes from USGS 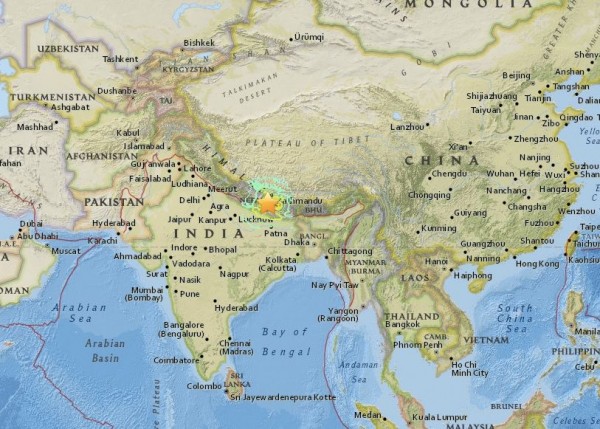 Bottom line: A powerful earthquake struck Nepal – between the capital city of Kathmandu and Pokhara – at 6:11 UTC (1:11 a.m. CDT) on April 25, 2015. Hundreds dead and many historic buildings collapsed.

Thank you! Your submission has been received!
Oops! Something went wrong while submitting the form.
END_OF_DOCUMENT_TOKEN_TO_BE_REPLACED