On January 10, 2012, a powerful 7.3 magnitude earthquake struck off the coast of northern Sumatra, Indonesia, prompting officials to issue a brief tsunami warning.

On January 10, 2012, a powerful 7.3 magnitude earthquake struck off the coast of northern Sumatra, Indonesia, prompting officials to issue a brief tsunami warning.

NOAA’s Pacific Tsunami Warning Center is reporting that a destructive widespread tsunami threat does not exist based on historical earthquake and tsunami data. There was some concern for moderate tsunami impacts on coastal areas located near the epicenter, which prompted Indonesian officials to issue a brief tsunami warning. The localized threat has now passed and the tsunami warning was lifted approximately three hours after the earthquake.

There have been no immediate reports of injuries or building damage according to recent news reports.

On December 26, 2004, Indonesia experienced one of the deadliest tsunamis in history after a 9.1 magnitude earthquake struck off the west coast of Sumatra.

USGS has a useful web page titled “Did you feel it?” where you can share information on your experience of an earthquake. So far 34 people have reported feeling weak to light shaking during the January 10, 2012, earthquake off the coast of Sumatra, Indonesia. 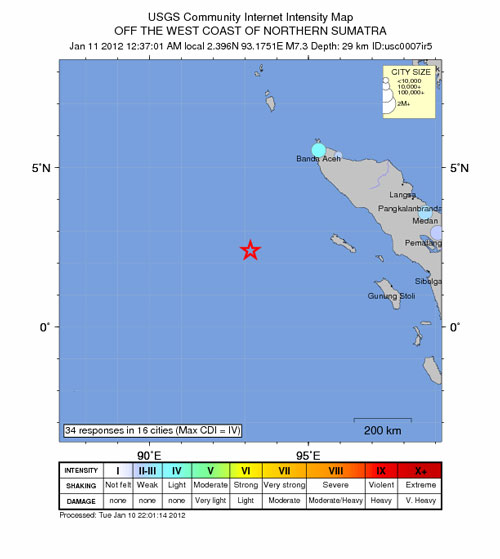