It’s getting hotter in the Arctic. Polar bears that move south will cross paths with grizzly bears. A new study suggests which species will come out on top.

A new study suggests that polar bears would lose out to grizzly bears in the event that climate change drives the two species into competition for food. 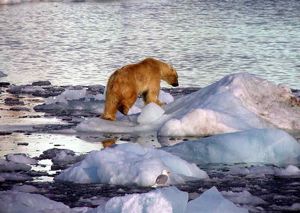 As Arctic ice melts, polar bears might move south. A new study suggests that – when polar bears meet grizzly bears and have to compete for resources – the grizzlies will likely win.

A polar bear – grizzly showdown might sound like the stuff of fantasy books, but the scenario is becoming increasingly likely. Warming Arctic temperatures are melting the ice that polar bears rely on to hunt seals for food, which may force the bears to move south in search of alternative food sources. Meanwhile, grizzly bears have been sighted moving northwards as the climate of their natural habitat grows milder.

Evolutionary biologist Graham Slater of UCLA used 3D computer models to compare the skull and jaw strength of the two bear species. He found that polar bears are not likely to be able to adapt to chewing and digesting the grizzlies’ largely vegetarian diet of plants, bark and berries. Seal blubber doesn’t require as much chewing, and puts less strain on a polar bear’s skull. The study concludes that climate change threatens polar bears not only by eliminating their primary food source, but also by putting them in competition with more adaptable bears.