Scientists studying mountain pine beetle outbreaks in British Columbia have found that summer temperatures over affected areas of the forest have risen by 1ºC.

Over the past decade, an unprecedented outbreak of mountain pine beetles has killed off large tracts of pine forest in British Columbia. Scientists studying the outbreak have found that summer temperatures over affected areas of the forest have risen by 1ºC. The research was published in the January 2013 issue of Nature Geoscience.

Mountain pine beetles are small, black beetles that are native to forests in western North America. Adult pine beetles tunnel under the bark of pine trees in the fall to lay their eggs. The eggs then hatch into larvae that overwinter in the trees. The larvae feed on the trees and emerge as young adults sometime during the summer or early fall. Most trees that have been attacked by pine beetles die soon after becoming infested. 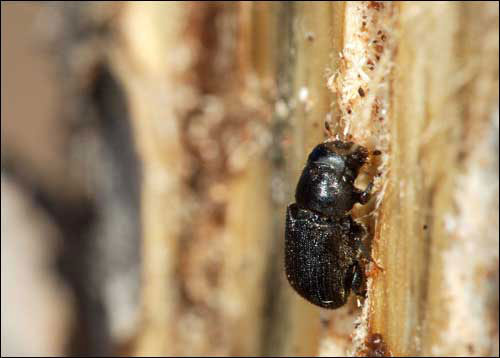 Since 1999, mountain pine beetle infestations have affected about 18.1 million hectares of forest in British Columbia, an area that is equivalent to just over five times the size of Vancouver Island. Scientists project that 58% of pine volume may be lost in the province by 2021.

Outbreaks of mountain pine beetles have been unprecedented over the past several years due to unusually hot and dry summers and mild winters. Hot and dry summers stress pine trees, which can make them more susceptible to beetle attacks. Additionally, mild winters temperatures aren’t cold enough to kill off mountain pine beetles, and beetle populations can grow out of control.

While scientists and natural resource managers are well aware of the adverse impacts that pine beetle outbreaks can have on forest health, the new study published in Nature Geoscience suggests that impacts from pine beetles may also extend to changes in regional climate patterns.

A team of scientists from the University of Toronto and the University of California at Berkeley analyzed satellite data over the past decade and found that summertime air temperatures over affected strands of forest in British Columbia have risen by 1ºC. Scientists think that this increase in temperature was related to a corresponding 19% loss in evapotranspiration. After trees die-off, solar energy that was previously spent on evaporating water may become more readily available to heat the surface of the forest, the scientists say.

These shifts in forest temperature and evapotranspiration could have the potential to affect other secondary climate processes including cloud formation and precipitation.

Bottom line: Scientists studying the impacts of mountain pine beetle outbreaks in British Columbia have found that summer temperatures over affected areas of the forest have risen by 1ºC. The research was published in the January 2013 issue of Nature Geoscience.

Now you can identify trees with your smartphone